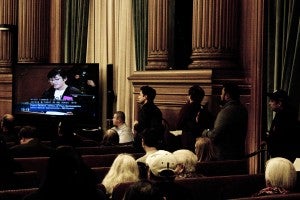 Community members line up to speak against the 5M Project. PHOTOS BY WILFRED GALILA

SAN FRANCISCO—Filipinos and other residents of the South of Market neighborhood remained sharply divided after the city’s Board of Supervisors in an 8 to3 vote gave the green light to a controversial new development project.

The vote came after four hours of public comment attended by close to a hundred opponents of the 5M Project on November 17.

Supporters of the project contend that 5M will lead to a safer and cleaner neighborhood with affordable housing for working class and elderly residents. But opponents have argued that it will lead to the erection of a financial district in the working class neighborhood at the South of Market, a multicultural working class community comprised mainly of Filipinos, Chinese, Latinos, and African Americans.

Supporters of the project, such as John Elberling of the Tenderloin Neighborhood Development Corporation (TODCO), a community-based housing and community development non-profit for the SoMa neighborhood, calls it “the best ever, so far, big development in SoMa history.”

Elberling said SRO tenants have asked for such a development for decades, with on-site rental units affordable to middle income employees of community agencies like TODCO. He added, “Gentrification will happen with or without 5M. But 5M directly helps us build a future SoMa where we still belong.”

The project has garnered support among seniors, neighborhood groups and nonprofits that serve youth and families, such as United Playaz, Intersection for the Arts, City Crossroads, Tenderloin Neighborhood Development Corporation and SPUR. 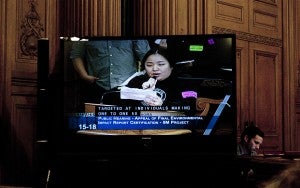 TJ Basa testifying against 5M Project at public comment session of the San Francisco Board of Supervisors.

It will comprise of one new office building and two new residential buildings, new public parks, support for cultural and youth programs, and restoration of three historic buildings, covering four acres between 5th and Mission and Howard streets.

In a statement after the project’s approval, senior vice president for Forest City, Alexa Arena, said, “This milestone represents the start of our continued work with the community to ensure that the approved project is the best it can be over the long-term. The support we’ve received reinforces the neighborhood’s desire to add unprecedented levels of affordable housing, much needed open space, and youth and family benefits in SOMA.”

Arena said further: “We’re grateful for the support of the community, Mayor’s office and Board of Supervisors and believe the project will be a thoughtful and beneficial addition to SOMA.”

Those who are against the project are doubtful about the proposed benefits that the project supposedly will bring. Some believe that those who support the 5M Project are groups who stand to directly benefit from the project have received funding from the developers and that they do not represent those who will be most directly impacted by the new South of Market.

Opponents believe the project will be another addition to the history of displacement of Filipinos and other minorities in San Francisco. The expansion of the Financial District led to the eradication of what was once Manilatown on Kearny Street and the redevelopment of Yerba Buena and Moscone Center displaced Filipinos in South of Market.

TJ Basa, director of Kearny Street Workshop, a Tenderloin resident, and community supporter, said, “The 5M Project will put our community at further risk of fracturing and displacement. 600 luxury units won’t house SoMa’s low-income senior and working class residents, nor our artists, nor our service workers.”

Ada Chan, project manager for SoMa Pilipinas’ Filipino Cultural Heritage District, supports development on the site but does not support the project as proposed. She said, “My primary concern is the city and the planning department are putting neighborhoods through multiyear planning processes and then encouraging developers to build beyond existing zoning in exchange for what they determine to be ‘community benefits’ outside of the multiyear planning processes.

Chan charged that this encourages speculation on the part of landowners and destabilizes the real estate market. “Second, it discourages communities from believing in the democratic-public process and city accountability, and third, in every presentation of the project, we have seen the majority of the presentation focused on ‘the deal’–what ‘benefits’ have been negotiated with the developer. That’s not planning, that’s called business. During the eight-year period in which the city was negotiating with the developer, City staff did not hold one public meeting until the draft EIR was published.” 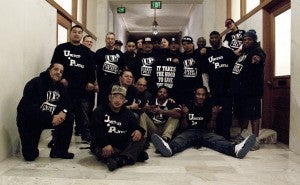 Members of the SoMa antiviolence youth organization United Playaz, which is in full support of the 5M Project.

Chan addressed the project’s alleged zoning violation: “In the morning this project will cast a shadow from 5th and Mission across Mission Street, Jessie Street, Stevenson Street, Market Street, Turk and Eddy Streets. Now imagine the shadow in the late afternoon. I don’t think allowing a development to go up 10 times the allowable height, and generating over 6,000 trips a day, is something that any existing neighborhood in San Francisco wants.”

Chan accused the City’s planning staff of having a “manifest destiny mentality” at the cost of communities and neighborhoods, that to want to preserve neighborhoods and communities would involve sitting down with them and planning together.

“Of even greater concern is that the Hearst Corporation and Forest City have always said that their intent is to sell the entitlements. So all the agreements will now be transferred to the highest third party bidder that neither the city nor the community has vetted,” Chan added.

Angelica Cabande of the SoMa Action Committee (SMAC) proposes the community vision of development in the site that “has as much overall housing (687 units) with 50 percent affordable housing in keeping with the City’s Housing Balance policy. This will be achieved by taking advantage of the fact that Hearst Corp. has owned the site for decades, therefore there’s no compensation for the land, and by utilizing tax credits and tax-exempt bond financing.”

Cabande further stated: “The community vision has open space; ground floor retail and community space and retains the historic buildings. But instead of spot zoning to 470 ft., heights are capped at 160 ft., the highest allowed on the site. It respects zoning in way that the City and developer have consistently failed to do.”

Mike Ng, artist and SoMa resident, was disappointed by the hearing. “I was ashamed that in spite of everyone fighting for what they thought was right, in the end, the city had already made their decision, with or without us, it appears to me. I think everyone’s eyes got big when the idea of 40 percent affordable housing came up, instead of looking at the bigger picture.”

Ng added, “After five years, (Supervisor) Jane Kim will no longer be around, Mayor Lee will be irrelevant, the developers will move on. I saw SMAC try to work with the system according to regulations only to have the wool pulled from them, with deals done behind backdoors.”

He warned, “Our leaders should know how we feel. Sometimes its getting the whole community out on the streets and stopping traffic and marching down Howard Street (is needed) to show these are the people who need to be heard not told what is going to happen to them!”

Filipinos up in arms vs. new San Francisco building project