Kin of undocumented could swell U.S. voter rolls by 1.6 million 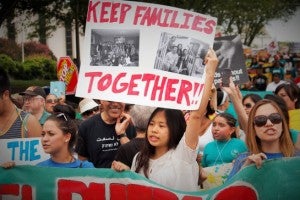 WASHINGTON, D.C.—A think tank report says that as many as 1.6 million U.S. citizens who live with relatives that are eligible for Deferred Action for Parents of Americans and Lawful Permanent Residents (DAPA) relief will be eligible to vote in the 2016 presidential election, with that number going up to 2.3 million by 2020.

This trend is exhibited across the nation in key states such as Florida, Nevada, Colorado, North Carolina, Arizona and Georgia. The report also says that a total of 6.3 million U.S. citizens live in the same household as a relative who would be eligible for DAPA.

The report serves as a warning to politicians who are opposed to DAPA and the expansion of Deferred Action for Childhood Arrivals (DACA).

The Center for American Progress (CAP) and the Center for the Study of Immigrant Integration (CSII) at the University of Southern California released the new report on the potential impact that DAPA-affected voters could have on upcoming elections.

The report was released on the one-year anniversary of President Obama’s executive actions on immigration, and on the heels of the 5th Circuit Court of Appeals decision to block implementation of the DAPA directives and expansion of  DACA.

“At its core, DAPA is about family—and DAPA families include individuals who can and do vote,” said Manuel Pastor,  director of CSII and co-author of the report.

Pastor added: “Those who oppose the implementation of DAPA and the expansion of DACA may want to take into account how DAPA-affected voters—not just the current citizen relatives but also the US-born children who will age in to become part of the electorate—will feel if their family members remain in immigration limbo. Millions of affected individuals and their kin are watching closely, and they will remember how leaders speak, act, and engage in holding up action that could positively impact not just their family life but also their stability and safety.”

This report looks at the national implications of the emerging DAPA-affected electorate and provides key data for dozens of states, highlighting six battleground and near-battleground states where DAPA-affected voters could play a significant role in upcoming presidential, senatorial, and gubernatorial races.

An accompanying interactive exhibit released with the report compares the estimated number of DAPA-affected voters in the 2016 and 2020 elections with states’ 2012 margins of victory, while a suite of graphics calculates the high economic cost of delaying DAPA and expanded DACA in several ways.

One of them—a continuously running ticker—captures the cumulative GDP the United States has lost without DAPA and expanded DACA, initiatives that would provide work permits and temporary relief from deportation to eligible unauthorized immigrants. Another calculation shows that every day the directives do not move forward, the United States loses $8.4 million in GDP.

“On a day when we should be celebrating the enormous positive impact that these executive actions have had on millions of American families and the economy, it is a shame that we have to instead discuss all that we are losing out on,”said Lizet Ocampo, CAP associate director of Immigration and co-author of the report.

“When thinking about immigration policy, candidates and elected officials should not just take into account the societal and economic benefits of the executive actions and immigration reform. They should understand the political implications as well. Identifying the millions of American citizens, most of whom are children, whose lives would be positively transformed by DAPA helps us understand how vital the policy really is not only to the immigrant community but to the nation as a whole.”