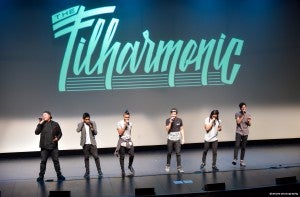 LOS ANGELES–Filipino American a cappella group The Filharmonic, which has grown from an underground sensation and to making the semifinals on NBC’s hit musical competition, “The Sing-Off,” enraptured an ethnically diverse audience of millennials and some the older folks at the Valley Performing Arts Center in California State University-Northridge on November 21.

The Filharmonic vocalists VJ Rosales, Joe Caigoy, Trace Gaynor and Barry Fortgang and vocal bass Jules Cruz and Niko Del Rey have collaborated with Linkin Park and the Black Eyed Peas in the course of their careers.

However, the Los Angeles County-based group’s main claim to fame is their role in the critically and commercially acclaimed Hollywood movie “Pitch Perfect 2” where they took center stage as one of the finalists in the pivotal musical competition. The film starred A-list actresses Anna Kendrick, Brittany Snow, Anna Camp, Rebel Wilson, Ester Dean, Alexis Knapp and Hana Mae Lee.

The CSUN audience members included a good representation of Filipino American youths who had grown up with the musical talents of the Filharmonic. Its a sound that has an urban flavor with a dose of hip hop inspiration.

The Filharmonic did not disappoint its audience, dishing out a cover for American rapper Silento’s 2015 hit debut single, “Watch Me (Whip/Nae Nae),” among other R&B selections.

Vocalist Caigoy told INQUIRER.net that they got to know each other while participating in various acappella competitions, mostly at Mt. San Antonio College in Walnut, Los Angeles. “We noticed there were Fil-Ams in various groups and decided it would be nice to meld our common background–musicality, cultural heritage and talent.”

The first competition they went for was the “Sing-Off,” which was received warmly by American audiences. Member Cruz mentioned they were surprised with the response from Filipino Americans and those from the Philippines after “Pitch Perfect 2” became a worldwide favorite. “”We had no idea they would embrace us as quickly as they did,” he said. 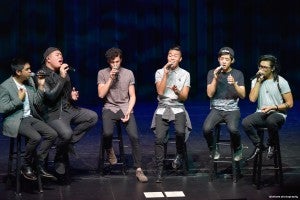 The members of The Filharmonic met on the a cappella circuit.

Facilitating the Filharmonic’s performance at the VPAC was Annie Nepomuceno, a well-known LA-based performer and leader of the Phillippine Patron of Arts, with her husband, Ed. She said her group aims to highlight the talents of outstanding Filipino American performers among the local communities. “

“We’ve observed there is no booking agent or talent agency that focuses on the talent and ingenuity of Filipino American artists; yet there’s thousands of Philippine immigrants who would cater and appreciate their performances.”

She added: “We want to make it easier for Fil-Am performers to get to mainstream venues such as the Ford Amphitheater, the Valley Performing Arts Center, Disney Hall, among others, without being limited by the mainstream agents’ stringent requirements. We’ve recently presented the Harana Men’s Choir and Serenata Filipina at the Disney Hall, as well as jazz singer Mon David.”

The Filharmonic will be performing in some major cities in the U.S. in the next few months, notably Chicago and Arkansas. They are scheduled to perform in Los Angeles with another Fil-Am entertainer in the summer, date to be announced.