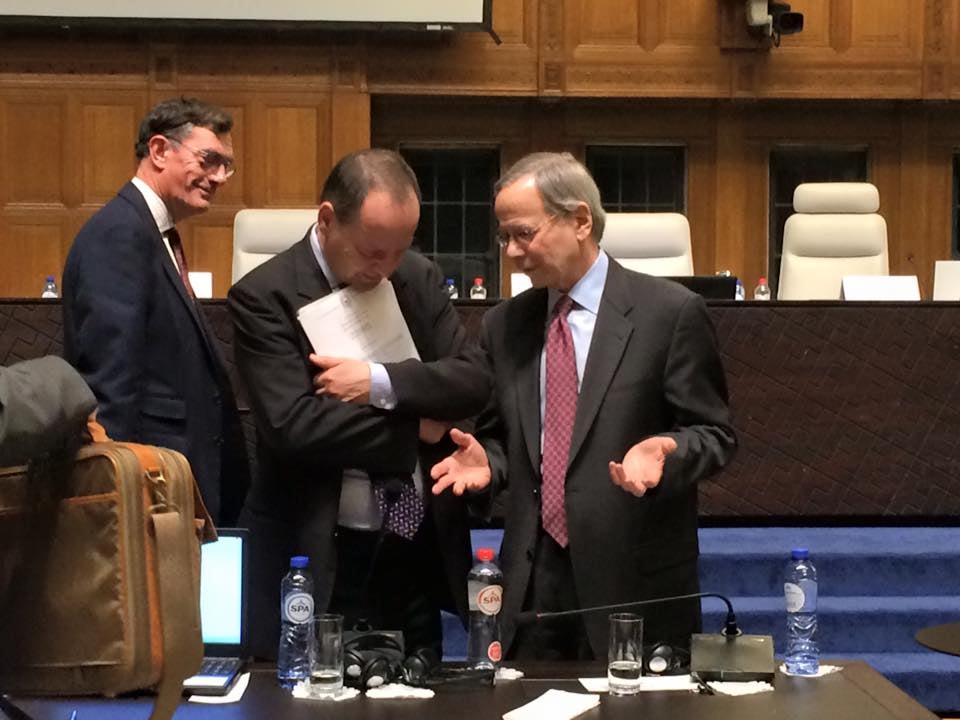 Day 2 of the hearings on the merits of Philippines’ case against China over a territorial dispute in the South China Sea at The Arbitral Tribunal of the Permanent Court of Arbitration in the Hague. L-R Professors Allan Boyle, Philippe Sands and Paul Reichler. PHOTO FROM THE FACEBOOK ACCOUNT OF ABIGAIL VALTE

China’s blocking of Philippine ships bringing supplies to Filipino soldiers stationed at Ayungin Shoal (Second Thomas Shoal) was a deliberate move to “physically expel” the Philippines and its people from the disputed areas of the South China Sea region being claimed by the Philippines.

This was one of the arguments presented by the Philippine legal team before the UN Permanent Court of Arbitration as it wrapped up on Thursday the first round of arguments in the hearing on the merits of the case that the Philippines filed to invalidate China’s claim to nearly the entire South China Sea.

The team will return to the tribunal on Nov. 30 for the second round of arguments, deputy presidential spokesperson Abigail Valte said in a dispatch from the Hague.

In his presentation before the court, professor Bernard Oxman, one of the Philippines’ foreign lawyers, said China has been undertaking actions, even while the arbitration is pending, that “aggravated and extended the dispute.”

“Oxman stressed that China’s denial of access forms part of ‘a deliberate policy to physically expel the Philippines and its nationals’ from the disputed features and its surrounding waters,” Valte said.

The March 29 incident was a rare closeup look at the increasing tensions between the Philippines and China over overlapping claims in the Spratlys chain of islands and other features in the South China Sea.

The mission was also significant as it took place on the eve of the Philippines’ filing of its arguments in the tribunal.

A small civilian government ship was carrying provisions for a group of Marines stationed on the BRP Sierra Madre, a rusting hospital ship that was deliberately grounded on the shoal to mark it as Philippine territory.

The troops had been stationed at Ayungin for almost six months, the longest period that a team had been deployed at the shoal to ensure that China did not occupy it as it did Mischief Reef (Kagitingan Reef) in 1995.

China has turned Mischief Reef, one of the islets and reefs in the disputed Spratlys archipelago claimed by the Philippines, into an artificial island and built three airstrips on it.

Deployments to the Spratlys island chain usually last for only three months but this team’s tour of duty was extended because China would block all resupply and rotation missions.

Another legal counsel, professor Alan Boyle, detailed before the tribunal the “series of near-collisions that occurred in April and May 2012 in Scarborough Shoal involving Chinese Marine service vessels and Philippine vessels.”

Valte said Boyle told the court that these incidents “displayed China’s ‘deliberate disregard for international law’ on the safety of maritime vessels.”

China has boycotted the arbitral tribunal hearings, saying the dispute should be tackled bilaterally.

Beijing has also maintained that the nine-dash line, the intermittent dotted lines on maps published by China, that it uses to mark its maritime boundaries in the South China Sea over which it claims sovereignty, is based on so-called historic rights.

On the first day of the oral arguments, the Philippines told the court that the nine-dash line does not exist.

On Friday, the Philippine legal team also underscored the “catastrophic” environmental impact of China’s artificial island building in the Spratlys.

Paul Reichler, principal counsel for the Philippines, described Carpenter and Schofield as “independent experts presented [at the court] to give their own analyses based on their areas of specialization.”

Schofield is the director of research at the Australian National Center for Ocean Resources and Security at University of Wollongong in Australia.

Carpenter is with the Department of Biological Sciences at Old Dominion University in Norfolk, Virginia.

“Carpenter drew the conclusion that China’s actions have caused grave harm to the environment in the South China Sea due to its artificial island building activities, and that the damage to the complex coral reef ecosystem is close to catastrophic,” Valte said.

Boyle also expounded on the “damage China has done to the marine ecosystem, more specifically, to the complex ecosystem of coral reefs, biological diversity and living resources in the South China Sea.”

“Boyle stated that, if unchecked, China’s activities [would] continue to pose a significant threat to the marine environment of the South China Sea and of all the states which border the sea,” Valte said.

“Boyle argued that China has violated its obligation under the United Nations Convention on the Law of the Sea to protect and preserve the marine environment, citing instances of harmful fishing practices such as blast fishing, cyanide fishing, harvesting of giant clams, and catching of turtles and other endangered species,” she said.

“Boyle also stressed that China, as a flag state, is responsible for its failure to prevent its fishermen and vessels from engaging in illegal fishing activities,” Valte added in the bulletin sent by Malacañang to the media.

Valte said Schofield presented his findings on 47 features requested by the tribunal to be studied to determine whether they are insular, low-tide or high-tide elevations.

According to Filipino maritime law expert Jay Batongbacal, the purpose of Schofield’s presentation was the “characterization of all features in the South China Sea, to determine whether or not the Chinese activities mentioned in the complaint are within or outside either 12 or 200 nautical miles of another feature claimed by China.” TVJ