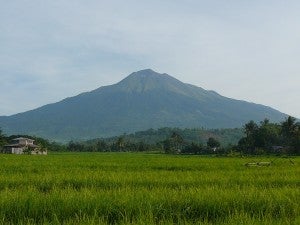 BACOLOD CITY, Negros Occidental, Philippines — Authorities are trying to reach a female Polish trekker who began her climb at Mt. Kanlaon on Monday, hours before the volcano had a steam explosion.

A group of guides was being organized to search for the two should they fail to return by Wednesday, he added.

Trekking was banned starting on Tuesday when the Philippine Institute of Volcanology and Seismology (Phivolcs) hoisted Alert Level 1 over  Kanlaon volcano  after it had a steam explosion.

Mt. Kanlaon, which straddles the provinces of Negros Occidental and Negros Oriental, is an active volcano but remains a favorite spot for climbers.

With its twin-peaked massif rises 2,465 meters above sea level, the volcano is a centerpiece of Mount Kanlaon Natural Park, a national park located at least 30 kilometers from this city.

Pinosa said Hodson and Villar were supposed to have begun their trek to the Kanlaon crater on Monday and were expected backon Wednesday.

Pinosa said they had been trying to reach the two by phone but they could not get through.

A Notice to Airmen (NOTAM) has been issued declaring the airway near Mt. Kanlaon Track 3 a no-fly zone because of volcanic activity.

The steam explosion occurred at 9:55 p.m. on Monday and lasted for eight minutes, Phivolcs reported.

“The explosion produced a 1.0-1.5-kilometer high white plume above the summit before drifting towards the southwest,” it said.