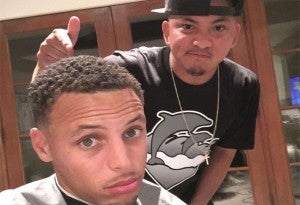 LOS ANGELES–Angelito Mallari, Jr., better known as Jay-R, and as Warriors star Stephen Curry’s barber, is a 28-year-old Filipino American from Vallejo, California. He works at Legends The Barbershop on Fairfax Avenue.

I meet Mallari in the middle of the week, walking in on him as he’s taking a huge bite from a burrito five minutes before our interview is to start. He’s friendly and manages to say,“We could just chill right here,” with his mouth full.

Jay-R is the only one around wearing Warriors gear, reppin’ his area and checking his planner and phone to make sure everything is going as planned.

Being Filipino, I don’t hesitate to ask a typical question: “How many siblings do you have?”

He has three brothers, Amiel, Dennis and Steve. “We just love to chill and eat,” he says casually. Mallari describes support from his family as influential in keeping him rooted, “staying true to who I am and where I’m from.”

Jay-R’s dad, Angelito Mallari, Sr. is from Bagac, Bataan. His mom, Teresita Mercado, is from Calumpit, Bulacan. The family settled in Vallejo, where Jay-R grew up until he left for greener pastures, or longer hair, in Los Angeles. 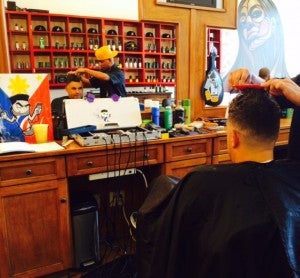 Jay-R busy at work at Legends The Barbershop on Fairfax Avenue in Los Angeles. PHOTO BY HIYASMIN QUIJANO

“I’m always networking,” he says of his business skills, which has reached a different level as people are coming in requesting appointments with him to get specific haircuts he does.

Time management, he says, has become a challenge working at Legends. “It gets real busy.”

The most requested styles of haircut since his work as Curry’s barber got media attention? “The Wardell aka ‘Splashfade.’”

Stephen Curry seems loyal to his work. What makes for their good barber-client relationship? “Stephen and I are not only friends, but also brothers in Christ,” he declares.

He cut Curry’s hair for the latter’s GQ Magazine feature, “but it was a few weeks grown out.”

Jay-R’s YouTube page has a video of “Cookin’ with the Currys” with him tasting lemonade that Ayesha, Curry’s wife, made.

If he were the chef and not the barber in this video what dish would he have the Currys taste? “Chicken tinola!”

Jay-R’s website, Jayrthebarber.com is coming soon. It’s launching, he hopes, in December. “It will help answer any questions and keep everyone updated on what I’m up to.”

He spends a lot of time with his family and “my lovely fiancé.” He’s also planning a few appearances in the San Francisco Bay Area to help young kids. His message to aspiring barbers: “Don’t just learn how to cut hair, learn the art of barbering.”