Why still no justice for victims of the Maguindanao massacre? 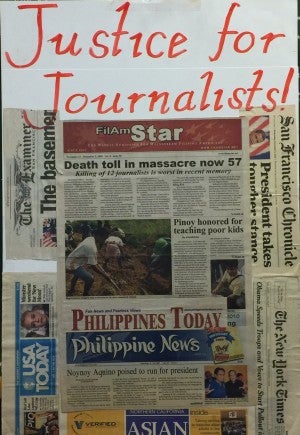 SAN FRANCISCO–Six years have passed since a hundred armed men on November 23, 2009 kidnapped and massacred 58 people, including 32 journalists, in the town of Ampatuan in Maguindanao province in the Philippines. The brutal crime shocked not only the people of the Philippines, but also the world and confirmed perceptions that our country was one of the most dangerous places in the world for journalists.

Six years later, not one of the perpetrators has been brought to justice. Instead, there have been allegations of efforts to silence witnesses through bribery and threats. Moreover, four witnesses for the prosecution have been killed.

The victims of the massacre were on their way the Commission on Elections office in Shariff Aquak to file candidacy papers for Vice Mayor Esmael Mangudadatu of Buluan town, who was challenging Andal Ampatuan Jr., son of then-Maguindanao Governor Andal Ampatuan, Sr. in the scheduled Maguindanao gubernatorial election. The Mangudadatus believed that bringing along a big group of journalists in their entourage of six vehicles would discourage those who had sent death threats to the family from attempting any attacks. They were tragically mistaken. 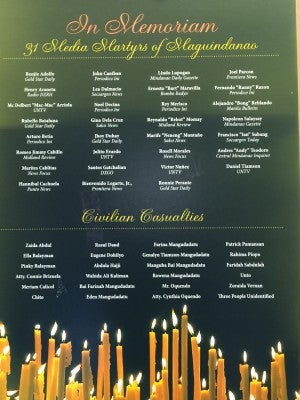 Before she was killed, Mayor Mangudadatu’s wife sent him a text message identifying their kidnappers as Andal Ampatuan Jr.’s men. She texted that Ampatuan Jr. himself had slapped her. The people who were kidnapped, killed and hurriedly buried in a mass grave included Mayor Mangudadatu’s wife, his two sisters, journalists, lawyers, aides and passing motorists who witnessed the kidnapping. At least five of the female victims, four of whom were journalists, were raped before their execution. Two of the women were pregnant.

Six years have passed yet the Philippines’ courts have not convicted any of the mass murderers, despite witnesses and the obvious political motives of those behind the crime. Despite pleas for action from international human rights organizations, the Philippine government’s inaction continues to send the message that the powerful can inflict harm on journalists and ordinary citizens with impunity.

When Ferdinand Marcos imposed his dictatorship in 1972, journalists and the free press were among its first victims to be attacked and muzzled. It is sad to see that under the Philippine democracy that was restored by the People Power uprising in 1986, and to this very day, the free press and its practitioners are still among the last to be defended and shielded from harm.

Justice has been delayed and denied for six years. It’s time to decisively bring the mass murderers of Maguindanao to justice.