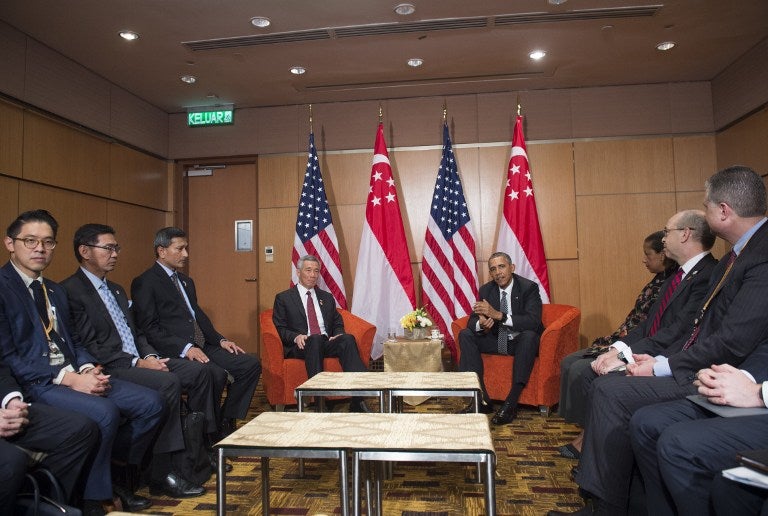 US President Barack Obama and Singapore’s Prime Minister Lee Hsien Loong hold a meeting in Kuala Lumpur on November 22, 2015, on the sidelines of his participation in the Association of Southeast Asian Nations (ASEAN) Summit. Obama and his counterparts from China, India, Japan and elsewhere are meeting in Kuala Lumpur for two days of talks hosted by the 10-country ASEAN. AFP PHOTO / SAUL LOEB

China came under renewed criticism Sunday over its rising profile in the South China Sea as it jostled with the United States for regional influence at the conclusion to a week of top-level diplomacy.

Asia-Pacific leaders met in Malaysia with China finding itself in the firing line over its land reclamation projects that have turned tiny atolls into fully-fledged islands with potential military uses.

“The world is watching” to see if Beijing will behave like a “responsible global leader” in the standoff, President Benigno Aquino III told the assembled leaders.

The talks — which included the United States, China, Japan and others — were hosted by the 10-country Association of Southeast Asian Nations (ASEAN).

US President Barack Obama, who earlier in the week repeated US calls for China to stop the land reclamation, announced Sunday he would host the ASEAN leaders at a meeting in the United States next year.

“This region … is critical to security, prosperity and human dignity around the world,” he said, while also pledging continued trade, diplomatic, and security support for the region.

The annual season of summitry, which began a week ago in Turkey for the Group of 20 meeting, and continued with regional forums in Manila and Kuala Lumpur, has been overshadowed by the string of recent deadly extremist attacks.

But attention in Malaysia shifted back to Chinese actions, which have raised fears of potential conflict at sea.

Japanese Prime Minister Shinzo Abe waded into the fray, calling for the South China Sea, a key route for global seaborne trade, not to be militarized, while refraining from directly naming China, according to Kyodo news agency.

China insists on sovereignty over virtually all the resource-endowed South China Sea, which is also claimed in part by Vietnam, Malaysia, the Philippines, Brunei, and non-ASEAN member Taiwan.

Beijing has displayed irritation with Washington’s expressions of support for the claims of China’s neighbors, and once again refused to budge on the issue in Kuala Lumpur.

With Obama present, Chinese Premier Li Keqiang told Sunday’s closed-door summit that countries “from outside the region” should stop inflaming tensions over the maritime dispute, a Chinese official said afterward.

Washington has said the move was meant to stress the right to free passage in waters China claims, but Liu called it a “political provocation.”

At the same time, China offered its own carrot to ASEAN, announcing a new raft of infrastructure loans totaling some $10 billion.

ASEAN on Saturday issued a joint statement stressing the need to maintain freedom of navigation and over-flight rights in the South China Sea.

Washington says navigation in a sea through which much of the world’s trade passes could be threatened by actions such as China’s island-building.

ASEAN also called for quicker progress on agreeing a code of conduct at sea with Beijing.

China has been accused of dragging its feet on the code — which could hamper its freedom of action at sea — and seeking to run out the game clock while it works to turn its disputed territorial claims into a fait accompli.

Obama also stressed US support for the code, and said on Saturday that “for the sake of regional stability, claimants should halt reclamation, new construction, and militarization of disputed areas.”

Earlier Sunday, the heads of ASEAN signed an agreement to formally establish the region as an EU-style common market.

Actually realizing the vision of the “ASEAN Economic Community” remains a distant goal due to significant non-tariff and other barriers, and large development gaps across the diverse region.

Diplomats have admitted Sunday’s declaration has no practical effect and was largely meant to avoid having ASEAN — regularly criticized for its lack of concrete achievements — miss its own deadline of 2015 for the AEC.

But the move takes the region a small step closer to a hoped-for single Southeast Asian market with free flow of goods, capital and skilled labor across borders.