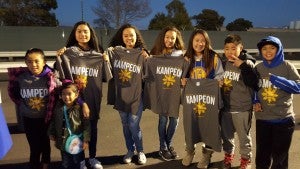 Filipino kids with their Kampeon shirts at the tailgate in the Oracle Arena parking lot during the recent Golden State Warriors Filipino Heritage Night. PHOTOS BY JUN NUCUM

OAKLAND, California–It was probably sports’ longest Filipino Heritage Night ever, but no one was heard complaining and every one seemed to even want more. More of the Filipino Heritage Night, that is, especially among Filipinos cheering for the Golden State Warriors who won a thrilling overtime game over the Brooklyn Nets 107-99 on November 14 at the Oracle Arena.

The basketball crazy Filipino fans brought their passion for the ballgame with them from the Philippines to the Bay Area, handing it to their children by bringing them along to the games. That’s especially so during heritage night when Filipinos get together, starting with in a celebratory tailgate akin to a rural Philippine fiesta.

“It is really exciting that the Filipino Heritage gets to grow each year. I mean I can tease everyone we can make every night Filipino Heritage night because if you look at the crowd, it is really a very strong fan base. We are really excited to continue to do it,” beamed Filipina American Golden State Warriors Chief Financial Officer Jennifer Cabalquinto before the game.

“It is great to have this Filipino heritage night going on because you cannot beat Pinoy pride. We are the Bay’s team and the Bay Area is well represented by Filipinos being the fastest growing immigrant group and we certainly represent the Bay. Tonight the players will be wearing the first ever Filipino Heritage Night shooting shirts and that was really important for us. The Bay and the 2014-2015 National Basketball Association (NBA) Champions are the first ones to get that done. And I am proud to have that happen. “ 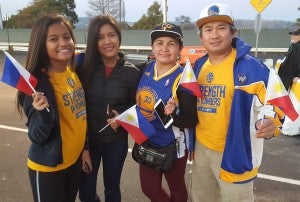 Rowan and Femy Semilla with friends Tess Jusi and another at the tailgate in the Oracle Arena parking lot during the recent Golden State Warriors Filipino Heritage Night.

In an interview during the tailgate at the Oracle Arena parking lot before the game, Filipina American Warriors group sales manager Maria Valdehueza traced the beginnings of Filipino Heritage Night.

“Filipino Heritage Night started off as a group ticket event for the community to purchase tickets to attend the Warriors games. It has continued to grow in the last few seasons that we now hosts two heritage nights, tonight and one again in March 25 when we play Dallas. The Filipino community has been a big supporter of the Warriors and Filipinos are obviously big basketball fans so it’s exciting to get them here to celebrate culture and to support the basketball team as well,” Valdehueza recounted. 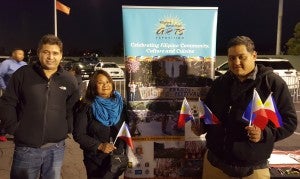 Cyril Sola and companions at the FilipinoAmerican Arts Expo booth.

“We have done this already for at least eight seasons now. We get at least 5,000 Filipino fans of the 20,000 seating capacity of the Oracle every heritage night. And I attribute the growth of the number of fans to having a great basketball team in the current NBA world champions. Of course, the Filipino community loves basketball. Everybody wants to bring the family – their lolos, lolas, their neighbors– they want to bring whoever they can to celebrate basketball and culture.”

Valdehueza added that it would be a lot crazier if there were a Filipino American player among the Warriors lineup, just like in 1978 when the team drafted Raymond Townsend from the UCLA Bruins, where Philippine Basketball Association (PBA) Tower of Power University of the Philippines Maroons alumnus Benjie Paras’ son Kobe Paras is currently playing.

At the tailgate, the Larry O’Brian NBA championship trophy was on display for picture-taking opportunity for an hour. Four food trucks offered Filipino food. The Dub truck offerered Warriors merchandise in support of the Filipino community. Fil-Am DJ Romeo Reyes provided the music and Kampeon shirts that came with especially priced tickets were handed out.

Stephen Curry practicing before game with the Nets as Filipino kids from West Bay Multiservices watch their idol.

Among those who attended the tailgate was Leslie Beltran who came with wife, Liliian, and children Angel, Michaela, and Jasmin, an Ilocano family based in Hayward who came every heritage night.

“I love the Filipino food, the Filipino shirt, the hat and simply representing our culture. We go here with our children every time because they have to learn their Filipino heritage. And of course it is bonding time for the whole family,” exclaimed Lillian while their children, in unison, cried, ”We are happy on Filipino Heritage Night because we love the Warriors and Steve Curry

Couple Rowan and Femy Semilla, who came with friend Tess Jusi, had been wanting to have their picture taken with the championship trophy since the day the Warriors were proclaimed champions.

“This is a dream come true. It is great for it is a symbol of championship. Filipino heritage night is very important because they honor us Filipinos. This year they are honoring us twice not just once and we are very excited,” the three friends chimed.

At halftime of the Warriors game itself, a cultural dance number by Fil-Am children garbed in colorful ethnic costumes delighted the crowd.

Bicolana Cyril Sola of the Filipino American Arts Expo stated that her group tries to go to as many heritage nights of even the other Bay Area teams like baseball’s three-time world champions San Francisco Giants and also the Oakland A’s, as “it feels so nice to see the community coming together showing their pride being Filipinos and embracing their Filipino-American heritage, sampling of our food, our customs.”

“What makes this a success is that Filipinos are basketball fans and Filipinos like to party on heritage nights,” Sola believed.

Mark Tandoc of 600 Hands has been going to Heritage Nights for six or seven years. “The Warriors and the Giants are great organizations. They really love the Filipino community especially here in the Bay Area,” said Tandoc. “We’re the single largest group of any event of the Bay Area teams, including the San Francisco Giants and the Golden State Warriors. We are probably the most important ethnic group for both teams. And we have been their lucky charms in being the champions.” 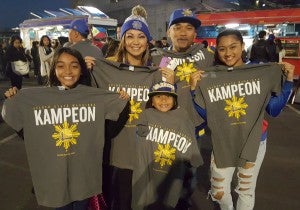 West Bay executive director Vivian Araullo felt greatly honored for the Warriors to recognize the Filipino community especially because Filipinos are among the biggest basketball fans in the world.

“West Bay has been the organization of the night twice and we have been here for heritage nights three or four times already. We really are a very special organization as far as the Warriors are concerned and of course we love the Warriors in return. Mahal namin sila. We expect to cheer the Warriors on to victory and to make sure (that they feel) that Filipinos in the South of the Market love them,” Araullo gushed.

Cabalquinto, representing the Warriors, recently was among an elite group of Filipino American executives from the Bay Area invited to the White House for its first Filipino American History Month celebration.

Read Next
Tacloban group’s London exhibit thanks UK for disaster aid
EDITORS' PICK
IATF: Food firms to operate with 50% of workforce during Luzon quarantine
BREAKING: 1,075 people in PH has coronavirus disease – DOH
Style and music journeys with Claudia Barretto
UP-PGH wards for COVID-19 patients finished in 5 days
Cebu City closes its borders
DILG to stranded workers: ‘Stay where you are’ until Luzon-wide quarantine is over
MOST READ
593 health volunteers sign up to fight COVID-19, says DOH
Pacquiao to seek probe on leaked private letter from Barangay Dasmariñas
Toyota Makati, Inc. employee tests positive for COVID-19
Another doctor dies due to COVID-19 in Cebu City, doctor-husband critical
Don't miss out on the latest news and information.