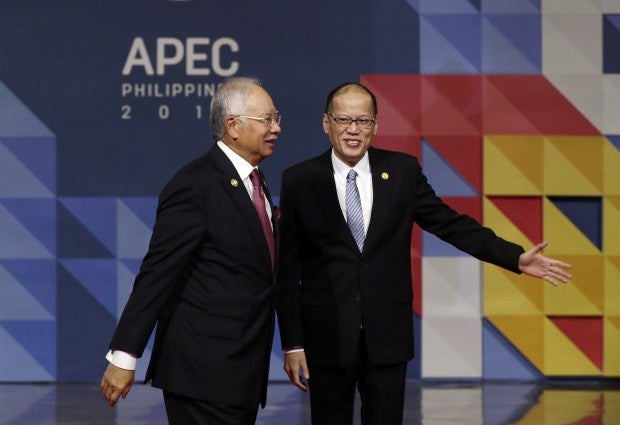 KUALA LUMPUR—Heeding the plea of Malaysian Prime Minister Najib Razak to punish the kidnappers of a Malaysian man in Mindanao, President Benigno Aquino III has ordered the military and police to intensify their operations against the Abu Sayyaf Group.

“President Aquino has directed the AFP (Armed Forces of the Philippines) and the PNP (Philippine National Police) to further intensify operations against Abu Sayyaf Group and other terror threat elements,” Presidential spokesperson Herminio Coloma Jr. said in a statement on Saturday.

“The Philippines extends its deepest sympathy and condolences to the bereaved family and stands in solidarity with Malaysia and Asean (Association of Southeast Asian Nations) in resolutely fighting terrorism,” Coloma added.
READ: Malaysia ‘sickened’ by citizen’s beheading in PH
“Shocked and sickened” by the beheading of Bernard Then Ted Fen last Tuesday, Najib last week called on Philippine authorities to take action on the “savage and barbaric act.”

Najib, in his speech at the ongoing 27th Asean summit in Kuala Lumpur, Malaysia, condemned the beheading of their national as well as the recent terror attacks in Paris and Mali.

“We are ever vigilant against a threat that is very real in our region. Local militants and groups, such as Abu Sayyaf, have sworn allegiance to the so-called Islamic State (Islamic State of Iraq and the Levant or ISIS). It was they who cruelly murdered our countryman, Bernard Then, on Tuesday,” Najib said.

Aquino is one of the delegates who attended the Asean summit at the Kuala Lumpur Convention Center. He will stay in the city until Sunday.

The PNP and the AFP refuse to conclude that it was the head of Fen that was recovered in Jolo, Sulu last Tuesday.