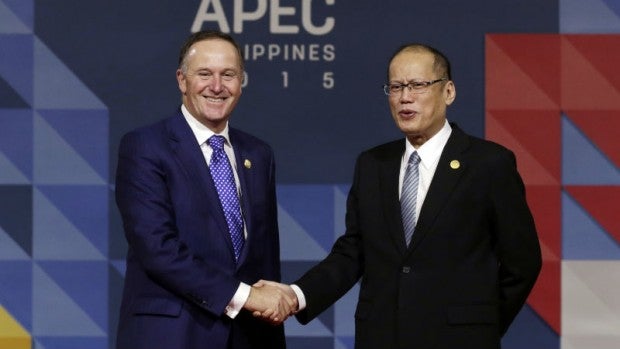 Key and Aquino met on Thursday evening on the sidelines of the Asia-Pacific Economic Cooperation (Apec).

Communications Secretary Herminio Coloma Jr. said the two leaders “noted that bilateral trade between the Philippines and New Zealand increased by 6.4% to $553 million in 2014 while investments from New Zealand approved by Philippine investment promotion agencies increased significantly by 71% in the same year.”

Another sector discussed was the dairy industry since New Zealand extended support for the establishment of “focus farms and infusion of fairy animals.” Its government also provided scholarship grants to Filipinos who are involved in the field of geothermal energy. The scholars are said to be contributing to the Department of Energy’s renewable energy development program.

“He (Aquino) said the Philippines hopes the project can be expanded to bolster the development of the Philippine dairy industry,” Coloma said.

There are an estimated 40,000 Filipinos in New Zealand and Aquino reportedly “acknowledged [their] significant contribution” to New Zealand’s economic development.

“He welcomed the signing of the arrangement on the principles and controls on the recruitment and protection of Filipino workers in New Zealand, as this will be instrumental in ensuring the welfare of our workers,” Coloma said.

As with the other Apec leaders participating in the Trans-Pacific Partnership (TPP), Aquino asked Key for support as the Philippines is gearing up for possible accession to the agreement.

Other issues discussed are disaster risk reduction and management efforts and the climate change negotiations in Paris at the end of the year. RAM