Trudeau to Filipinos: Judge me beyond my looks | Global News
Close
menu
search

Trudeau to Filipinos: Judge me beyond my looks 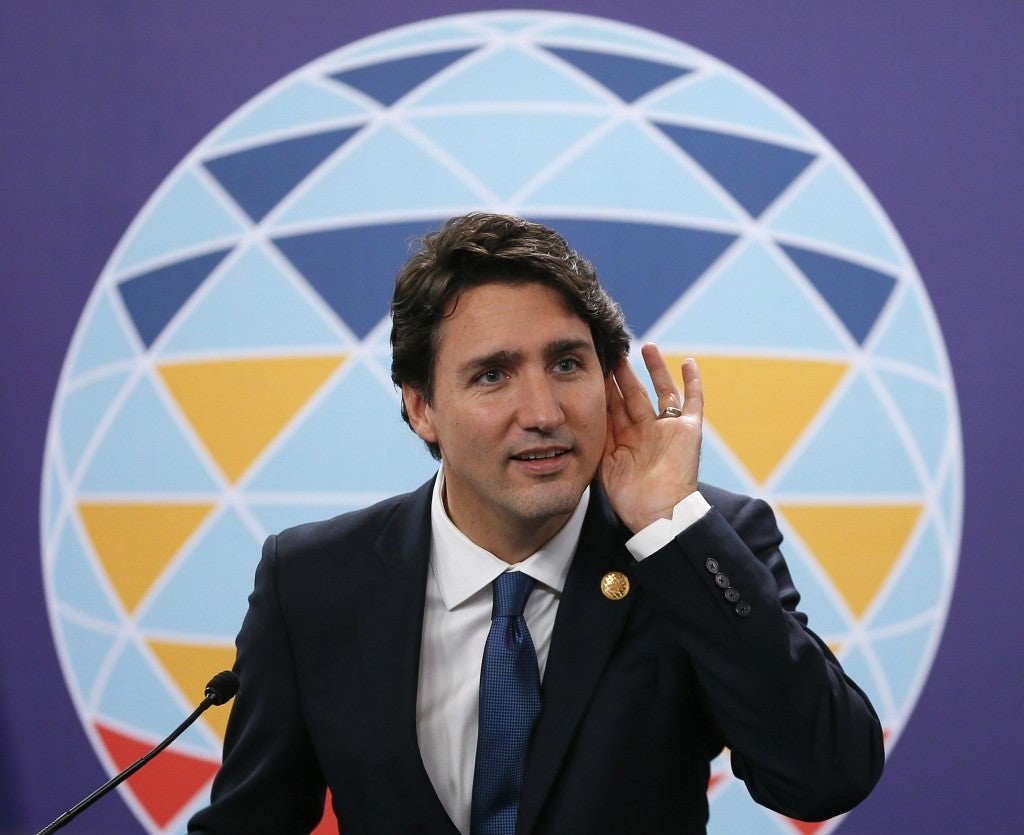 CANADIAN prime minister Justin Trudeau on Thursday expressed his appreciation for the attention Filipinos gave him as he attended the Asia Pacific Economic Cooperation (Apec) Summit, but he said he hoped he would be judged beyond his good looks.

In a called press conference at the International Media Center in World Trade Center, Trudeau said he has learned to focus on “substance” and not just on external features.

“I have absolutely adored my stay in the Philippines. Everyone has been tremendously friendly and, for me, it was an opportunity to engage with a culture that I’ve gotten to know very well in Canada. We have over 700,000 Canadians of Filipino origin and the ties that bind our countries together are very strong. So for me to be able to be here and see what a beautiful and welcoming country so many of my fellow Canadian citizens call home or original home is a real pleasure,” Trudeau said.

He went on to share a lesson he learned from his father – the late former Prime Minister Pierre Trudeau – to set aside “positive impressions that weren’t grounded in reality” and instead focus on “substance.”

“What I also had to learn is that there were a lot of people who liked my father and liked me for reasons entirely unrelated to who I actually was, and I had to learn to set aside positive impressions that weren’t grounded in reality,” Trudeau said.

“So, throughout my life, I have focused on what I have to do and the substance of what I put forward, and that has left me both grounded and able to focus regardless of perceptions or attentions to things external,” he added.

Dubbed an “Apec Hottie” on social media, Trudeau’s attendance at the Apec was hounded by the trash issue involving a Canadian company that exported into the Philippines, in the guise of recyclable scrap plastic materials, several tons of soiled adult diapers and household trash.

In the same press conference, Trudeau vowed to close the loopholes in the law that allowed the shipment of Canadian dump to the Philippines, but he remained vague whether or not he would take the garbage back.

As many as 55 container vans containing garbage from Canada were discovered in 2013 by the Bureau of Customs.

Instead of shipping the garbage back to Canada, the BOC has decided to dump the trash in Capas, Tarlac at the Philippines’ expense.

The Ontario-based Chronic Inc. shipped the containers to Manila through its Valenzuela-based consignee, Chronic Plastics. The BOC filed criminal charges against Chronic Plastics for violating the Revised Penal Code, the Tariff and Customs Code and the 1990 Toxic Waste Act.

The Philippines has been calling on Canada to take back the shipment under a 1995 convention on hazardous waste, which provides that “the exporting country must take back the waste materials if the receiving country refuses to accept them.”