APEC is for big firms, not for people, say 2 foreigners who joined Manila protests 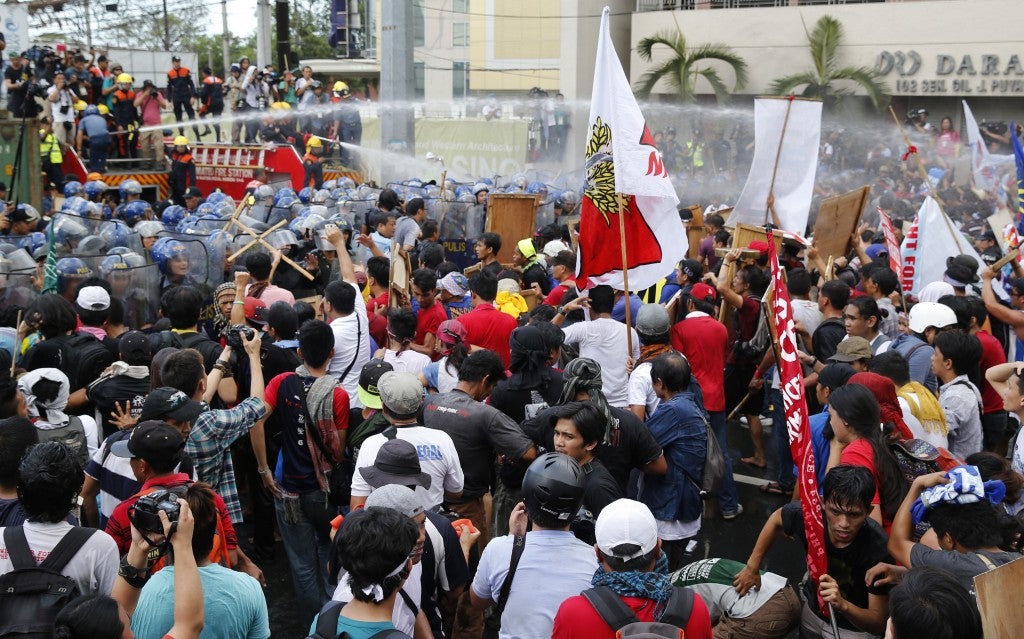 MANILA, Philippines — Two foreign militants became the highlight of Thursday’s anti-Asia Pacific Economic Cooperation (APEC) rally organized by local militant groups in the metropolis. Philippine laws prohibit foreigners from joining protests, but despite earlier warnings of possible arrests, Malcom Guy and Leila Khaled stood up before a crowd of about 300 for what was dubbed as the “Battle of Manila.”

Guy, secretary general of the International League of Peoples’ Struggle (ILPS), and freedom fighter Khaled of Popular Front for the Liberation of Palestine (PFLP) took the microphone while local policemen surrounded their rally site.

On a makeshift stage in Buendia, Pasay – the closest site they could get to Philippine International Convention Center (PICC), where leaders and high officials of 21 member countries and businessmen were discussing projects and policies for inclusive economic growth, Guy accused APEC of peddling a lie.

“They claim they are building a better world, a more inclusive economy. But all of us know that in fact, APEC is peddling a lie. And in our opinion, ours would be a better world without APEC,” Guy said.

Guy said he and Khaled, together with 400 others, were here for the IPLS 5th general assembly, which they organized in Manila because of the APEC. He said they were not afraid of arrests. The tanim-bala scam at the Ninoy Aquino International Airport, which aimed to make money out our tourists, was scarier, he said.

“As I’ve told people. I’m more afraid of getting run down in the streets in Manila and more afraid of having someone stick a bullet in my luggage on my way out than I have of coming here,” he told the Philippine Daily Inquirer.

The militants’ journey to Buendia, Pasay, was not without bloodshed. Their demand for cops to allow them to march from Liwasang Bonifacio in Manila to PICC led to several confrontations. Renato Reyes, secretary general of Bagong Alyansang Makabayan (Bayan), claimed that at least 20 protesters were wounded.

The marched started about 8 a.m. until they reached Buendia, Pasay about two hours later. They walked from the freedom park down to Taft Avenue and left the plant boxes on the southbound lane filled with vandalisms.

“While we were marching here, the comrades told me not to come to the front. They said they are throwing water. I said, ‘it’s okay, we’ll have a shower.’ In Palestine, we meet bullets with our bare breasts. We are not afraid,” Khaled said in her three-minute speech.

She also criticized the music played by cops to drown the rally’s noise. To start her piece, she reminded the protesters that “the voice of the people is always higher than all the leaders of the world. Nothing can pacify us. Whether in Palestine or in Manila. Whether here or in the US. The people shall be always victorious even if the road is paved with blood.”

“That is because the question of militarization, they say it’s good for the world, it’s a lie. The same with APEC, the more they say they are building a better world, and a more inclusive economy the less I, and the less we believe them,” he said, quickly answering his own questions.

Guy criticized his country Canada for brining large-scale mining companies in the Philippines and for lying to the people in Mindanao. Guy said he came to Manila to let the newly installed “pretty” Prime Minister Justine Trudeau know of these issues.

Canadians could relate to lumad problems, Guy said. There were many IPs in his country, and like in the Philippines, mining companies have been going after their lands.

Transpacific partnership was also “another lie,” he said. “It was negotiated in total secrecy. It is instead a deal to ensure more power to the local elites and the multinational corporation,” he said.

In a separate interview with Philippine Daily Inquirer, Guy highlighted a contradiction of government leaders opening up to businessmen but preventing migrants from crossing country boarders.

“It’s becoming more and more difficult for people moving around the globe safely and easily because we are closing our borders to people, to migrants or other people who need to move. But we are opening up to money and transnational corporations. So I’m more worried about that than people sticking bullets (tanim-bala) in my pockets,” he said.  SFM