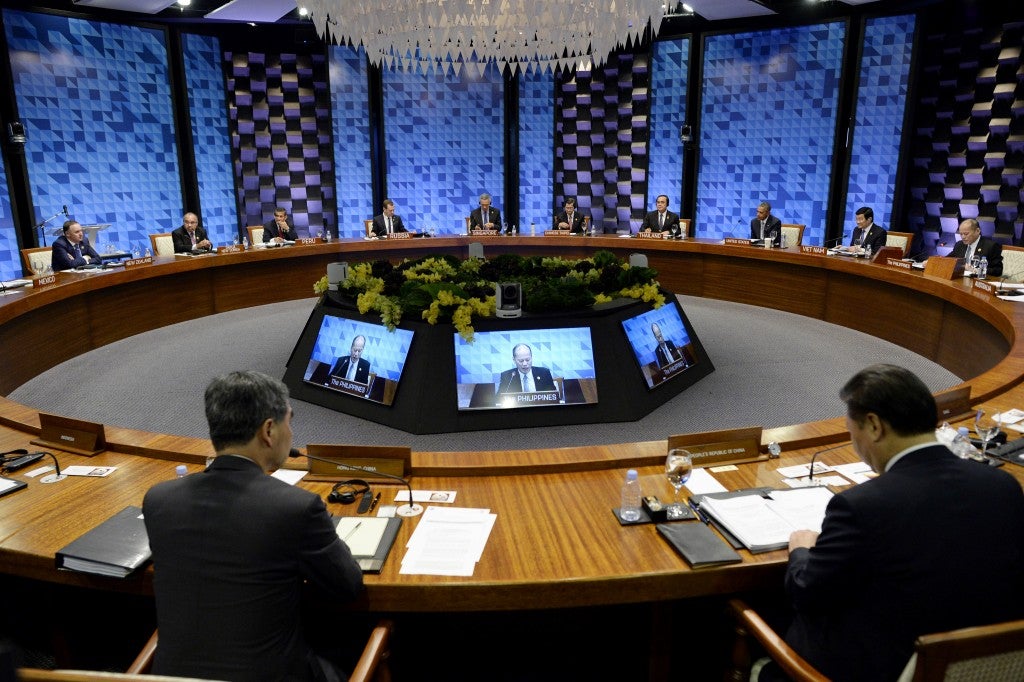 Asia-Pacific Economic Cooperation (Apec) leaders on Thursday released a strongly-worded statement condemning the terrorist attacks in various parts of the world, especially as it threatened “free and open economies.”

At the same time, they said economic growth and prosperity were needed to address the root causes of terrorism and radicalization.

“Under the shadow cast by the terrorist attacks in Paris, Beirut, and against Russian aircraft over the Sinai, and elsewhere, we strongly condemn all acts, methods, and practices of terrorism in all their forms and manifestations,” the statement said. “We will not allow terrorism to threaten the fundamental values that underpin our free and open economies.”

To combat the illegal economy and its harmful effects, Apec leaders vowed to promote international cooperation against corruption and other crimes.

In the commitments section of the statement, they lauded the efforts of member economies against terrorism “including capacity-building initiatives to combat terrorist financing, and to prevent foreign terrorist fighter travel through advance passenger risk analysis and other measures.”

The group, composed of some of the richest and most powerful countries in the world, called for international cooperation and solidarity to fight terrorism.

Earlier, a copy of the draft statement was leaked to media, confirming speculation that the economic summit would also tackle the recent Paris attacks, which killed more than a hundred people.

In the past week, the leaders have also discussed the issue among themselves, through bilateral talks and other meetings.

Established in 1989, it brings together countries that do not necessarily have close diplomatic ties but have aligned economic interests.

The group said that while their members “have remained resilient” in the face of financial volatility in the global market, they faced “challenges in boosting growth prospects” at a time of uneven global growth.

“The rapidly changing structures and competitiveness of our economies necessitate that we develop new drivers of growth, such as productivity-enhancing structural reform, services and trade in services, investment liberalization and facilitation, infrastructure investment, science, technology and innovation, that lead to more balanced and sustainable outcomes,” the group said.

It acknowledged that current economic growth was not enough to alleviate widespread poverty and there was a need to allow the full participation of all sectors, including women and persons with disabilities, to achieve inclusive growth. Nevertheless, it pointed out that 300 million people were lifted out of poverty in the Apec region due to rapidly growing developing economies.

“We call for more intensive efforts for [poverty’s] reduction and eradication. We also acknowledge that inequality acts as a brake on economic growth and that reducing it is essential to spurring development and prosperity in the Asia-Pacific,” the leaders said.

The group continued to push for “an open, predictable, rules-based, and transparent environment for trade and investment that enables meaningful access to economic opportunities,” saying it “provides the best means to deliver sustained and inclusive growth.”

“While achieving ongoing economic transformation will not be easy, we are confident that we will continue to drive regional and global economic prosperity through quality economic growth,” it said.

It also enumerated a number of commitments that it will continue to uphold, including the multilateral trading system under the auspices of the World Trade Organization, monetary and exchange rate policies, free and open trade and investment by 2020 and eventual realization of the Free Trade Area of the Asia-Pacific.

The group is setting its eyes not only on “future growth” that is strong and sustainable but also secure against natural disasters and other threats.

“We recognize that much more remains to be done to ensure that growth is experienced at all levels of our communities. We therefore support economies in their efforts to explore new growth areas, including reforms aimed at further strengthening the services sector by fostering creativity and innovation through an enhanced regulatory environment,” the group said, referring to its structural reform efforts.