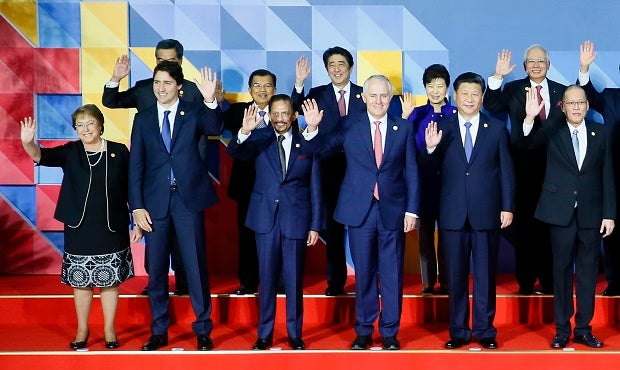 MANILA, Philippines — Leaders from 21 countries and self-governing territories meeting in Manila for the Asia-Pacific Economic Cooperation summit plan to issue a declaration that denounces terrorism and vows united efforts to combat its root causes. The following are highlights from the declaration seen Thursday by The Associated Press.

“Under the shadow cast by the terrorist attacks in Paris, Beirut, and against Russian aircraft over the Sinai, and elsewhere, we strongly condemn all acts, methods and practices of terrorism in all their forms and manifestations. We will not allow terrorism to threaten the fundamental values that underpin our free and open economies.”

“Economic growth, prosperity, and opportunity are among the most powerful tools to address the root causes of terrorism and radicalization. We stress the urgent need for increased international cooperation and solidarity in the fight against terrorism.”

“We are mindful that despite the unprecedented economic growth that has lifted millions of people out of poverty, it continues to be a reality for millions of others in our region. We call for more intensive efforts for its reduction and eradication. We also acknowledge that inequality acts as a brake on economic growth and that reducing it is essential to spurring development and prosperity in the Asia-Pacific.”

“We met at a time when global growth is uneven and continues to fall short of expectation. Risks and uncertainties remain in the global economy, including inadequate demand growth, financial volatility, and structural problems weighing on actual and potential growth.”

“We are firmly committed to achieving a fair, balanced, ambitious, durable, and dynamic agreement on climate change at the Paris Climate Conference in December. We therefore reaffirm our aspirational goals to reduce aggregate energy intensity by 45 percent by 2035 and double renewable energy in the regional energy mix by 2030 to achieve sustainable and resilient energy development within the Asia-Pacific.”