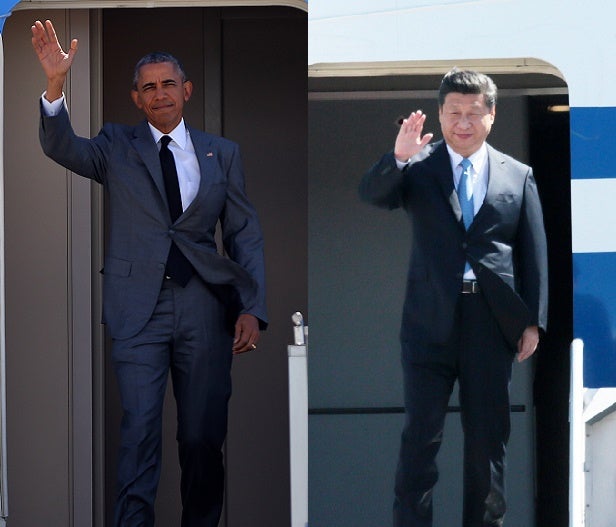 US President Barrack Obama and Chinese President Xi Jinping arrive at the NAIA for the APEC summit.
INQUIRER PHOTO/RAFFY LERMA

Asia-Pacific leaders will on Thursday wrap up two-days of talks in Manila that have been overshadowed by an arm-wrestle for regional influence between the United States and China.

The annual 21-member Asia-Pacific Economic Cooperation (Apec) gathering — hosted this year by the Philippines — is meant to forge trade unity but often finds itself sidetracked by other events.

This year the summit has heard intense rhetoric over the South China Sea, a strategically vital body of water claimed almost in its entirety by China.

Smaller nations with overlapping claims, including summit host the Philippines, are rattled by China’s increasing assertiveness in the sea.

These actions have included a spate of island building on disputed reefs and shoals, and many Asian nations are looking to Washington for support.

China had been hoping that the long festering territorial dispute would not surface at the trade gathering.

But those hopes were dashed when US president Barack Obama flew into Manila on Tuesday and announced more than $250 million in maritime aid for those Southeast Asian allies.

He also offered a warship to the Philippines, one of Beijing’s most vocal critics in the dispute.

On Wednesday, shortly before the trade talks got underway, Obama repeated Washington’s demand that China halt any further land reclamation and militarization.

“We agree on the need for bold steps to lower tensions, including pledging to halt further reclamation, new construction, and militarization of disputed areas in the South China Sea.”

Vietnam also signed a strategic partnership this week in Manila with the Philippines, deepening security ties partly in response to Chinese assertiveness in the sea.

Chinese President Xi Jinping has studiously avoided bringing up the dispute at the talks in Manila.

But officials in Beijing reacted with anger to Obama’s efforts to bolster US allies, while insisting China’s construction work in the contested areas was “lawful, justified and reasonable”.

Apec members the Philippines, Vietnam, Malaysia, Brunei and Taiwan have rival claims to parts of the sea, which is believed to sit atop vast oil and gas resources.

Obama and many Southeast Asia nations attending the Manila trade talks will proceed onto Malaysia for a regional summit.

The South China Sea row, the specter of terrorism and the US-led Trans Pacific Partnership free trade pact are likely to again be the main subjects of discussion in Malaysia.