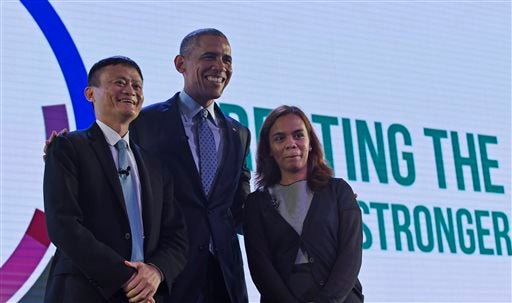 President Barack Obama, center, poses for a photo with Alibaba founder Jack Ma, left, and Filipina scientist Aisa Mijeno following a discussion at the CEO Summit, attended by 800 business leaders from around the region representing U.S. and Asia-Pacific companies, in Manila, Philippines, Wednesday, Nov. 18, 2015, ahead of the start of the Asia-Pacific Economic Cooperation summit. (AP Photo/Susan Walsh)

A Filipino woman who cofounded Sustainable Alternative Lighting (SALT), a start-up that created a lamp powered by saltwater, rocked the global stage at the Asia-Pacific Economic Cooperation (Apec) CEO Summit Wednesday as a shining example of the new breed of young entrepreneurs creating solutions to everyday problems.

No less than US President Barack Obama engaged Aisa Mijeno in a panel discussion side by side with self-made Chinese billionaire Jack Ma, founder of Alibaba, China’s biggest e-commerce platform that now sells as many goods as US retailing giant Walmart.

Obama, who pressed for global action on climate change at the summit, introduced Mijeno to the global audience and described as “brilliant” SALT’s idea of selling lamps powered by nothing more than saltwater.

“Innovators are coming up with new ideas every single day which brings me to my two partners here,” Obama said, later engaging the two in a panel discussion that lasted about 25 minutes.

He said he had brought one “young new entrepreneur” (Mijeno) and another “young at heart, but not-as-young large entrepreneur” (Ma) to compare notes on “why they see this as an opportunity and why they think it makes good business as well as good environmental sense, and how we collectively could be more supportive and encouraging of the kind of innovation that they represent.”

Mijeno, an engineer and a Greenpeace campaigner, conceived the saltwater-powered lamp after an immersion with members of the Butbut tribe in Kalinga province who relied on kerosene lamps and moonlight for lighting to do their evening chores.

She was inspired to come up with the innovative lamp upon learning that people had to walk down the mountain for six hours every other day just to get kerosene for their lamps because transportation was scarce.

To Mijeno, Obama said: “you have an idea that could both do well and do good.”

Mijeno cofounded SALT with her brother Raphael. She is now the CEO while the latter is the chief finance officer.

“Our main advocacy is we wanted to address the light inequality gap, first in the Philippines by focusing on the people at the bottom of the pyramid because they comprise 15-20 percent of the country’s population,” Mijeno said.

“Most of these families live on island-communities and they are not connected to power grids. They mainly use kerosene and fuel-based lamps as the main source of lighting and we know the danger that kerosene poses,” she said.

She noted that these types of lamps could cause fire accidents and emit more carbon.

Selling for $20 apiece, SALT’s lamps are envisioned to provide the marginalized with cost-effective and environment-friendly lighting.

The lamp uses a saline solution or ocean water to generate electricity, powering LED and a USB port where people can charge mobile devices like cell phones. Having such an alternative source fuel in turn is seen as essential during emergencies, especially in times of disasters, she noted.

The lamp is SALT’s contribution to efforts to curb climate change, and its impact could be scaled up once the enterprise goes into mass production.

“Imagine powering up a whole island using ocean water. Our planet is composed of 70-percent saltwater. So that’s what we’re trying to aim for,” she said.

The user only has to add one glass of water and two tablespoons of salt to run the lamp for eight hours.

Explaining the science behind the lamp, Mijeno said this was the conversion of chemical reaction to energy.

The lamp has a consumable component that must be changed every six months at a cost of $3, which suggests that it will cost $6 annually to maintain the lamp.

Obama said Mijeno’s product was definitely not like the items in informercials, where “you order and can’t make the thing work.”

He said: “Aisa is a perfect example of what we’re seeing in a lot of countries—young entrepreneurs coming up with leapfrog technologies in the same way that in portions of Asia and Africa, the old landline phones never get set up and they went straight to mobile … But the point is they did not have to make some of the massive infrastructure investments.”

The US leader added that the innovation was one example why the old idea that development and sustainability could not go hand in hand was outdated. He urged the global audience to support more of  start-up entrepreneurs.

Obama asked Ma how both government and large companies could help start-up businesses like Mijeno’s.

“Government is simple, reduce tax or no tax for these guys,” Ma quickly replied, eliciting laughter from everyone in the audience.

Asked by Obama what young start-up entrepreneurs needed, Mijeno cited a need for a support system from both the public and private sector alongside mentorship as well as new funding to mass-produce the lamps.

“That’s our main challenge right now. We’re in a critical phase. We’re trying to mass-produce the lamp so we’re just looking for someone to fund us,” Mijeno said, eliciting a mix of laughter and applause from the crowd.

Some thought it was a great pitch to the big philanthropist, who was seated just beside her.

Obama pointed to Ma, who was seated between them, again drawing laughter from the crowd.

The leader said in jest he was just like a matchmaker. He added that governments had a role to play, specifically by providing tax incentives for the production of clean energy.

At the Apec CEO Summit, Obama called on political leaders and the private sector to address climate change and support an ambitious agreement at the upcoming climate change summit in Paris to encourage more investors to get into clean energy.

He told the business leaders that the threat of climate change was not only a challenge but also an opportunity.

As was emphasized at the G-20 summit in Antalya, Turkey, Obama said “there is not a contradiction between growth development and being good stewards of the planet.”

He said they were complementary.

Obama noted how companies were investing in efficient and clean energy for their businesses. “Oftentimes they are finding that they’re saving money while operating in a cleaner way.”