Long, lonely walk on the red carpet for China’s leader

President Aquino promised to be the “perfect host” to all leaders attending a regional summit, but a long and lonely red carpet welcome walk for China’s Xi Jinping Wednesday betrayed their nations’ icy ties.

Mr. Aquino led the heads of the 21-member Asia-Pacific Economic Cooperation (Apec) forum along a red carpet laid throughout the summit venue in Manila to a stage where they gathered for an opening ceremony.

Xi and Chile’s President Michelle Bachelet were in the front row alongside Mr. Aquino.

But Mr. Aquino conversed only with Bachelet, laughing and chatting amiably, leaving Xi to plod somberly alone through the sprawling Philippine International Convention Center with nobody to talk with.

The awkward walk, which lasted four minutes and seven seconds, ended when Xi entered the hall for the opening ceremony and an unidentified official approached him. 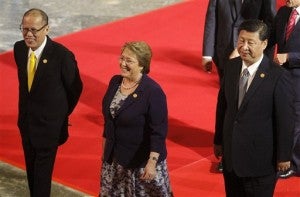 China and the Philippines are locked in a bitter diplomatic row over rival claims to parts of the South China Sea.

The Philippines had feared Xi may snub the summit because of the dispute.

When asked why Mr. Aquino had not moved to talk with Xi and whether it could be interpreted as a snub, presidential spokesperson Herminio Coloma Jr. declined to respond directly.

“It was a long walk, your question might be speculative,” Coloma said.

But Coloma said the two leaders had before the walk held a “warm and cordial” conversation for two minutes, although this was not captured on video.

When world leaders meet at any event, body language and personal interactions are often closely watched as a means of gauging a bigger picture on diplomatic relations.

Xi did not smile or speak, turning away from Abe to face the cameras even before the translator had finished speaking, and looked distinctly unimpressed.

Netizens quickly compared the pair to Winnie the Pooh and Eeyore—Abe taking the role of the miserable, downtrodden donkey of the AA Milne novels.  AFP