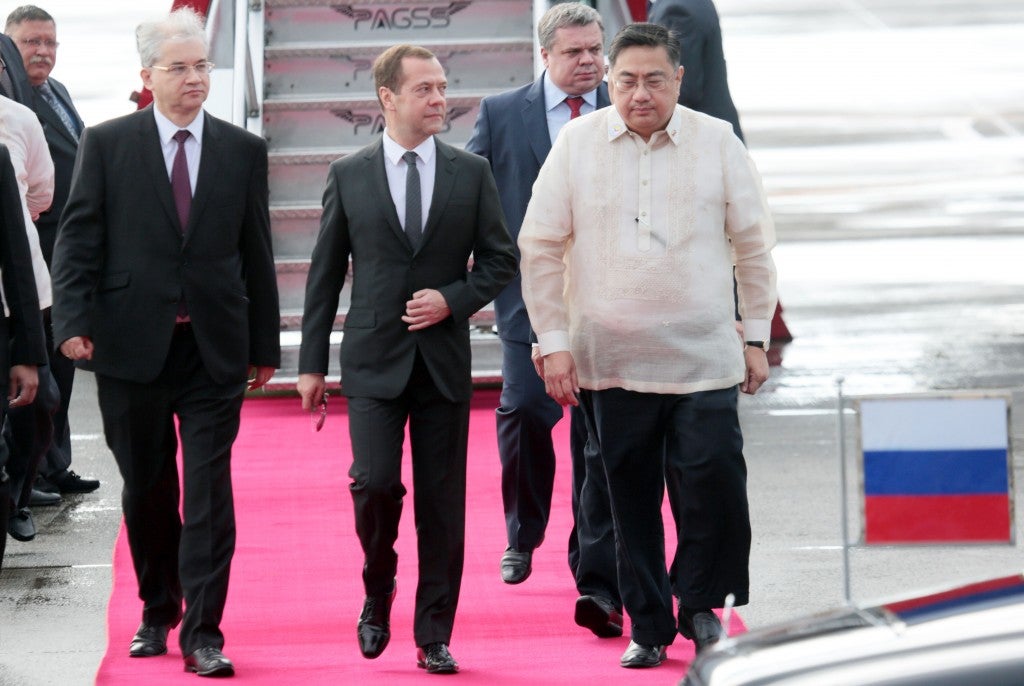 President Benigno Aquino III and Medvedev held a bilateral meeting on the sidelines of the Asia-Pacific Economic Cooperation (Apec) Summit in Manila.

While the two countries have maintained diplomatic ties for almost 40 years, the Philippines is known as a close ally of the United States, which has strained relations with Russia over the Ukrainian crisis and the Syrian civil war.

He said Medvedev also congratulated Aquino for the “impressive performance” of the Philippine economy and that Russia is interested in economic cooperation in energy, telecommunications and transport infrastructure.

Aquino and Medvedev witnessed the signing of an agreement on the Establishment of a Philippines-Russia Joint Commission on Trade and Economic Cooperation, which will facilitate and promote trade between the Philippines and Russia.

The two countries will identify measures to facilitate bilateral trade and investments.

“The Agreement envisions the participation of the private sector and business community, as well as experts in the economic field to complement governmental efforts to bolster Philippines-Russia economic cooperation,” a Malacañang statement said.

Also signed  before the two leaders was a memorandum between the Philippine Drug Enforcement Agency and the Federal Service of the Russian Federation for Narcotics Traffic Control on Cooperation in Combating New Psychoactive Substances.

In line with a 2007 agreement against trafficking of narcotic drugs, the memorandum aims to strengthen the cooperation between the two countries in combatting the production, spread and abuse of psychoactive substances.

Russian President Vladimir Putin was supposed to attend the Apec Summit but begged off as Medvedev was also attending meetings in the region.

“PM Medvedev conveyed Pres. Putin’s felicitations and expressed his personal elation on his first visit to the Philippines,” Coloma said.