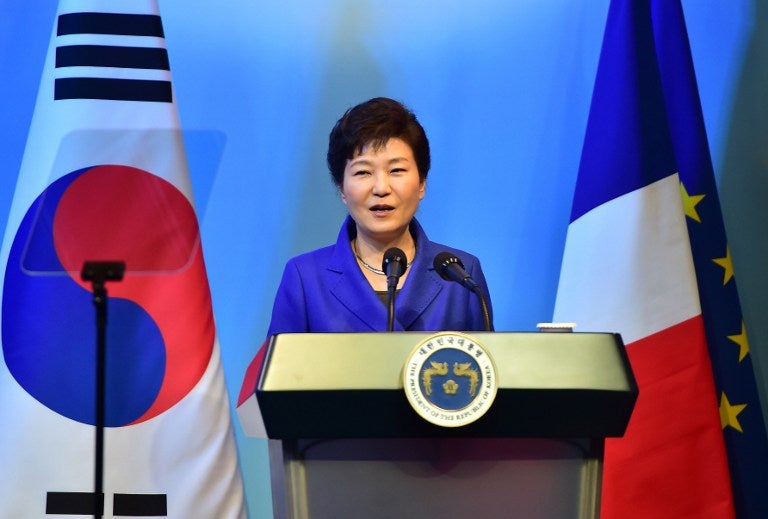 South Korean President Park Geun-Hye delivers a speech during a joint opening ceremony for South Korea-France economic and academic forums at a hotel in Seoul on Nov. 4, 2015. Park arrived in Manila, Philippines, on Nov. 17 for the Asia-Pacific Economic Cooperation summit. AFP

“[President Aquino] said he hoped KOR will positively consider proposed amendments to the Social Security Agreement so that it may be finally concluded to enable our peoples to fully maximize its benefits,” Communications Secretary Herminio Coloma Jr. told media.

In the past, OFW groups complained of the two countries’ agreement between Korea’s National Pension System and the local Social Security System. Reports said the agreement did not allow OFWs to refund their NPS contributions.

Aquino and Park met at the Sofitel Philippine Plaza around noon for a closed-door bilateral meeting.

For his part, Aquino assured the Korean leader that the government would ensure the safety and protection of all foreign nationals, including more than a million Korean citizens.

“We are pleased with the robust logistics corporation between our two countries, as manifested by PH acquisition of various defense materiel, most notably the FA-50 aircraft. We appreciate Korea’s donation of a patrol combat corvette, a landing craft utility, and 16 rubber boats to improve our military’s humanitarian assistance & disaster response capabilities,” Aquino was quoted as saying.

She pointed out that the partnership of the two countries had allowed the Philippines to become the fourth largest shipbuilding country, “a good reference and take off point for expanded trade, investment and economic cooperation” between the two countries.

“Every year, more than 2,000 Korean-Filipino multicultural families are formed and the Korean government fully supports this as a gesture of the deepening of people to people ties,” Coloma said. RC

Amid resignation calls in S. Korea, President Park now in PH for Apec