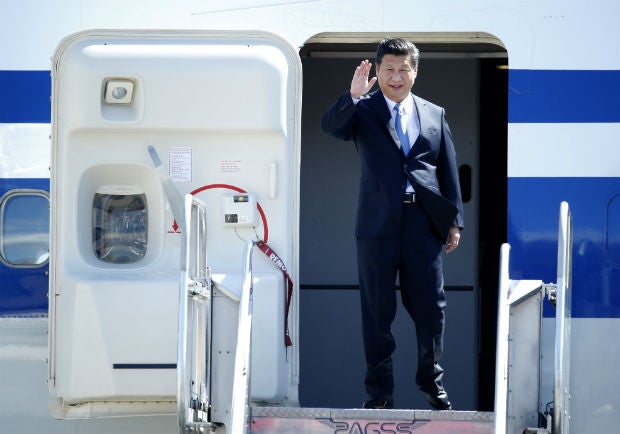 China’s President Xi Jinping waves as he disembarks from his plane on his arrival for the the Asia-Pacific Economic Cooperation (Apec) summit in Manila, Philippines Tuesday, Nov. 17, 2015. AP

MANILA, Philippines — Chinese President Xi Jinping on Wednesday sought to reassure regional economic and political leaders that his government will keep the world’s No. 2 economy growing.

In a speech to a business conference on the sidelines of the Asia-Pacific Economic Cooperation summit, Xi said China is committed to overhauling its economy and raising the living standards of its people.

China’s growth fell to a six-year low of 6.8 percent in the latest quarter as Beijing tries to shift the economy away from reliance on trade and investment. The slowdown, which has been unfolding for several years, has rippled around the world, crimping growth in countries such as South Korea and Australia that were big exporters to China.

“The Chinese economy is a concern for everyone, and against the background of a changing world must cope with all sorts of difficulties and challenges,” Xi said. But China would “preserve stability and accelerate its development,” he said.

“We will work hard to shift our growth model from just expanding scale to improving its structure.”

He also said Beijing is stepping up efforts to counter climate change and clean up its environment.

Weeks away from a deadline for an agreement to limit global warming, President Barack Obama sought to build momentum for the pact on Wednesday, reasoning that bold climate action will be a boon for businesses in Asia and around the world.

At the Apec business conference, Obama urged business leaders to reduce their own emissions and pressure governments to sign on to an international carbon-cutting pact to be discussed beginning Nov. 30 in Paris.

“Your businesses can do right by your bottom lines and by our planet and future generations,” Obama said. “The old rules that said we can’t grow our economy and protect our economy the same time — those are outdated.”

Xi did not comment on territorial disputes in the South China Sea, which are not part of the official agenda of the regional summit taking place under extremely tight security in the Philippine capital, Manila.

But on Wednesday, Obama called on China to halt further land reclamation and new construction in the disputed waters.

At a meeting with Philippine President Benigno Aquino III, Obama called for “bold steps” to lower tensions over China’s territorial ambitions in the region, which have recently centered on construction of artificial islands in areas claimed by the Philippines and other Southeast Asian countries.

READ: Obama: We have rock solid commitment to defense of PH

Such rifts often have tended to strain Apec’s facade of handshakes and unity, overshadowing talks on trade and development at the annual summit of the 21-member Apec.

The US has showed solidarity with the Philippines by conducting military maneuvers recently near islands where China has reclaimed land and built settlements to shore up its claims.

Read Next
Russian PM Medvedev urges Apec to fight terrorism
EDITORS' PICK
Comelec won’t proclaim party-list groups yet
House energy committee chair Arroyo bats for cheap electricity
Duterte signs law giving rights, more protection to foundlings
Honolulu Café is the cure for your Egg Tarts and Roastings cravings
DOJ-led panel drops 29 cases of torture, EJKs
Luxe property: A way to build, preserve wealth
MOST READ
Heart Evangelista gets a ‘no’ from Chiz Escudero after asking, ‘Do I deserve a bag?’
Pahiyas Festival back but tourists greeted with austere celebration
PH logs 110 new COVID-19 cases; active down to 2,487
Man posing as Marcos spox revealed to be an inmate in Bilibid — Guevarra
Don't miss out on the latest news and information.