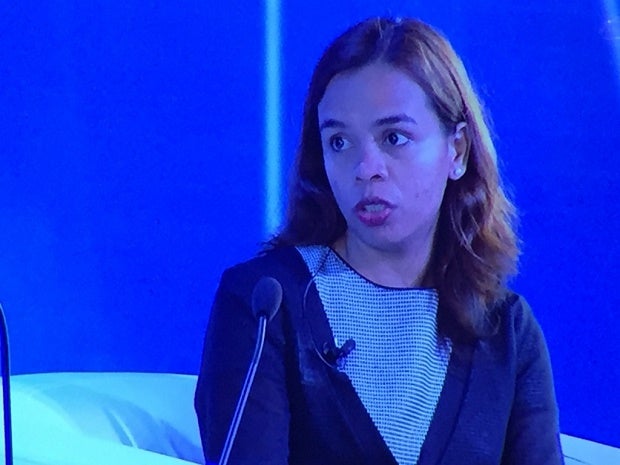 After delivering a speech, Obama led a forum during the Apec CEO Summit on Wednesday. Obama addressed questions to Jack Ma, the founder of Alibaba, a giant e-commerce firm, and Mijeno, an engineer and Greenpeace member who founded SALT Philippines.

The project provides lighting to areas without electricity with the creation of lamps that run on saline solution. The same solution is also used to charge mobile phones, Mijeno said during the forum.

“The danger in (kerosene) lamps is it could case fire accidents. We want to provide a lighting option that is more cost-effective, more safe, more sustainable and environmentally friendly by way of a lantern that uses saline solution or ocean water, as a catalyst to generate electricity,” Mijeno said.

Mijeno said her ultimate goal is to power an entire island using just ocean or saline water, in a nobler bid to address climate change.

“The huge impact we’ll be able to contribute when we dive into developing large-scale for the technology… Just imagine, if we’re able to power a whole island using ocean water. That’s what we’re trying to aim for,” she added.

Obama, who had been listening intently to Mijeno, remarked: “That’s great!”

“I think Aisa is a perfect example of what we’re seeing in a lot of countries –young entrepreneurs coming up with leap-frog technology,” Obama added.

“Aisa is an entrepreneur here in the Philippines, who launched a start-up around the brilliant idea, which is selling lamps that run on nothing more than saltwater. She’s an engineer and she has to explain the physics around this thing,” Obama said.

Mijeno said the lamp lights up in saline solution because of chemical reaction that emits light.

She said she first thought of the idea for the project when she had an immersion in a far-flung community in Kalinga, where there is no electricity.

“When I did a personal immersion out in the mountains of Kalinga, I heard their story. Because of scarcity of public transportation, people have to travel down the mountain and walk hours just to get kerosene for their lamps. They do that everyday,” Mijeno said.

She said the challenge is to look for sources of funding to continue the project.

Mijeno even told Obama, to the laughter of the audience: “Right now, we’re on a critical phase. We’re trying to mass produce a lamp, we’re just looking for someone to get the project moving.”

“I feel like I’m serving as a matchmaker here a little bit!” Obama said, the audience laughing.

Mijeno’s speech then shifted to the effects of climate change, which she said is not a myth scientists created to get funding for research.

“Coming from the academe background, I just want to emphasize that climate change is real, it’s a fact, not a myth that scientists created to order to get funding for grants,” Mijeno said.

She said climate change is like cancer which, if left unnoticed, may spread until it is too late for treatment.

When she said the Philippines is now in stage two, Obama interjected: “Just saying people!”

Mijeno urged the need for measures to address climate change, even if it means lighting a lamp using salt instead of gas.  CDG