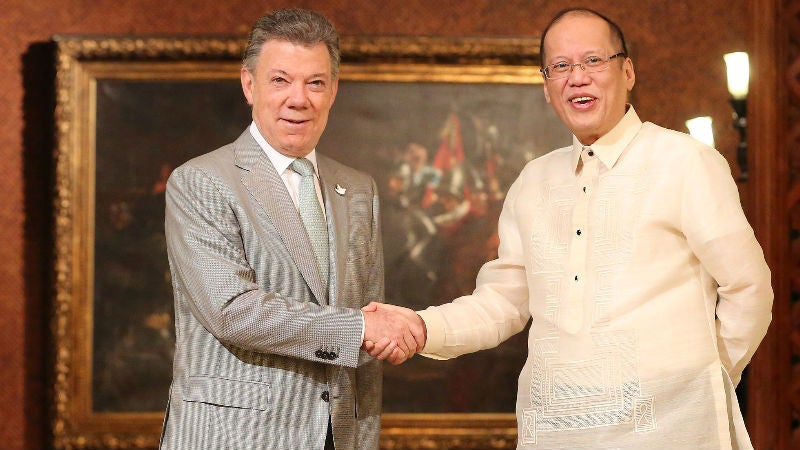 Colombia, who has been seeking membership in the 21-nation Asia Pacific Economic Conference (Apec) for the past 25 years, said that despite complications, talks with the Colombian rebels have progressed.

He said Mr. Aquino wanted to know what Colombia had done and how it had advanced the discussions and convinced the guerillas to enter the peace process, lay down their arms, and continue their ideological struggles through legal means.

According to Santos, talking peace with rebels would bring a host of economic benefits and boost Colombia’s growth.

“The benefit for the Colombian economy of a peace process, of ending the armed conflict, which has lasted more than 50 years, is huge,” he said.

Colombia’s economy would grow by 1.5 to 2 percent every single year, he said.

Moreover, regions in the country that used to have a dearth of state services or investments because of the conflict would be able to get these. Certain sectors could also expect a boom, such as tourism. Santos noted that because of the armed conflict, Colombia gets few tourists.

“As soon as this is over, there are enormous opportunities for any investor, Colombian or foreigner, to invest in Colombia,” he added.

Santos also pointed out that in the past few years, Colombia had been a leader in economic growth in Latin America, even in the middle of armed conflict.

“Can you imagine what we can do without the conflict? There’s tremendous potential there,” he said.

On climate change, Santos said Colombia was negotiating better carbon emission targets at the forthcoming environment conference in Paris before the end of the year.

Coloma said O’Neill cited the contributions of over 30,000 Filipinos working and residing in Papua New Guinea, specifically the teachers from La Salle and Don Bosco.

In a prepared speech following a bilateral meeting with Vietnam President Truong Tan Sang in Malacañang Tuesday, President Aquino said he welcomed the “active engagement and cooperation” between the Philippines’ and Vietnam’s security forces.

“As seafaring peoples, we look to initiatives that will enhance our capacities to better respond to challenges and situations in our common seas. The goodwill visit conducted last May by the Vietnam People’s Navy in our Parola Island, which is also known as Northeast Cay Island, has helped strengthen the camaraderie between our respective servicemen,” Mr. Aquino said.

Sang said that he shared Mr. Aquino’s concerns over recent developments in the South China Sea, affecting trust, peace, security and stability in the region in the face of China’s aggressive push into the region.

“We reaffirmed the importance of ensuring the stability, maritime security, safety and freedom of navigation and of flight in the South China Sea, as well as settling maritime disputes on the basis of international law including the 1982 United Nations Convention on the Law of the Sea,” Sang said in a prepared speech.

Sang described his talks with the President as “fruitful with many tangible outcomes.”

Mr. Aquino said he discussed the Philippine case against China that was filed with the United Nations arbitral tribunal at The Hague “concerning the sea west of our nation, and east of Vietnam—a sea known to us by so many names.”

“The case represents a significant step forward in our quest for a peaceful, impartial resolution as regards the disputes, as well as the clarification of our rights under the UN Convention on the Law of the Sea,” he said.

The President said that he could not “overemphasize the importance” of implementing fully the Declaration on the Conduct of Parties in the South China Sea for all parties to conclude negotiations on the Code of Conduct during next week’s Asean summit in Malaysia.

During the meeting, Foreign Secretary Albert del Rosario and Vietnam Deputy Prime Minister and Foreign Minister Pham Binh Minh signed a joint statement on the establishment of strategic partnership between the two countries ahead of next year’s 40th celebration of their diplomatic relations next year.

Sang spoke of defense cooperation mechanisms between the two countries while President Aquino talked about deepening ties between their respective Coast Guards and fisheries authorities, specifically for search and rescue at sea, and oil spill preparedness.