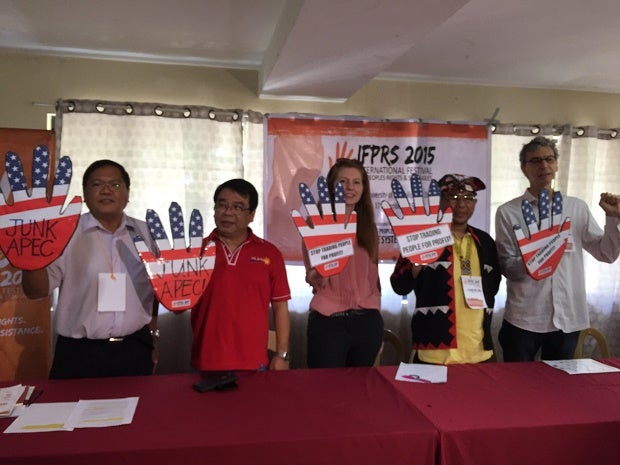 Local and international activists call for the junking of the Asia-Pacific Economic Cooperation summit on Tuesday, Nov. 17. Different groups warn against the Apec’s ‘”plundering of natural resources” and its other harmful consequences to the country’s economy, natural resources and people. YUJI VINCENT GONZALES/INQUIRER.net

A day before the Asia-Pacific Economic Cooperation (Apec) Economic Leaders’ Meeting in Manila, local and international activists warned that the international forum and its policies will do more harm than good, especially to the Filipino people and to the country’s natural resources.

“With the recent signing of a Trans-Pacific Partnership (TPP) agreement last Oct. 5, the Apec [ministerial meeting] in Manila becomes an opportune moment for the United States and its cohorts to cement a regional trade pact that serves the interest of the US and its corporations at the expense of people’s rights and welfare,” Lappin said during the International Festival for People’s Rights and Struggles at the University of the Philippines Diliman campus in Quezon City.

The TPP is a free trade agreement aimed at further opening up economies in the Asia-Pacific region.

Noting that the TPP deal was illegal and would allow corporations to take land and properties supposedly without responsibility, Lappin said the Apec summit would cement corporate power not only in the region but also globally.

IBON International director Antonio Tujan, Jr. said Apec was a symbol of “neo-liberal globalization” that may worsen poverty and cause devastating consequences to developing economies like the Philippines.

“Opening borders will create more problems for the people… Apec will also push the people to hunger and death,” Tujan said.

“The TPP and the Apec are both US-conceived tools that are part of the US’ rebalance in Asia strategy to regain economic influence in the region and counter the rise of China,” he added.

Malcolm Guy of the International League for People’s Struggles said the Apec summit was contradictory to its theme of promoting inclusive growth.

“We will show, in fact, that Apec is peddling a lie. The world will be so much better without Apec,” Guy said.

“We have so many things to say to global leaders so it’s important for us to go out in the streets, and I hope the Philippine government will respect our democratic right to protest,” he added.

Datu Jomorito Goaynon, spokesperson of protest group Manilakbayan and representative of the lumads, said the Apec summit condones environmental exploitation as it worsens the “plunder of natural resources” especially in Mindanao.

Lumad protesters have been camping out in Manila since late last month, in hopes that the national government would notice their plight and hear their grievances.

READ: ‘Lumad’ won’t back down from protest

Noting that poverty incidence in the region is still high, Bayan Muna Rep. Neri Colmenares said the Apec’s impact on the Philippines will be worse than in 1996, when the country first hosted the annual conference.

Colmenares said the Apec summit does not only damage the economy and resources, but also the people in general.

“Apec is not a mere showcase of leaders having a meeting on economic policies. It is a continued globalization of rich countries in the region,” he said. “The battle versus Apec is rooted on the principle that it destroys not only the economy but also the people.”

“While the Philippine government is lowering tariffs on goods, it is taxing the Filipino to death as it refuses to lower income tax,” the senatorial hopeful added. CDG

Read Next
Apec hotlines for security concerns launched
EDITORS' PICK
‘Justice will be done,’ Duterte assures as he vowed probe on Jolo incident to bare ‘truth’
EuroMillions Superdraw: A lottery draw unlike any other is coming to the Philippines
Current dominant strain of COVID-19 more infectious than original—study
DOLE: Return of OFWs’ remains from Saudi to be ‘delayed,’ deadline moved to ‘early next week’
Smart releases Hyun Bin’s second TVC
Water remains our saving grace right now
MOST READ
Locsin warns of ‘severest response’ if China’s army drills in SCS ‘spill over’ to PH domain
Duterte tells military: No other president looked at you the way I did
BREAKING: Duterte signs anti-terror bill into law
Go apologizes for 5-on-5 game; PBA summons Japeth, ROS rookie
Don't miss out on the latest news and information.