Obama heads for Asia with eyes on Middle East 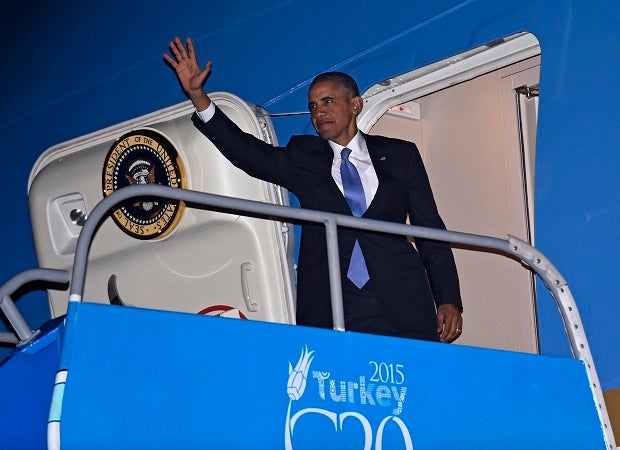 President Barack Obama waves from the top of the steps of Air Force One at Antalya International Airport in Antalya, Turkey, Monday, Nov. 16, 2015. Obama is heading to the Philippines and Malaysia for global security and economic summits after attending the G-20 Summit in Turkey. AP

MANILA, Philippines — President Barack Obama landed in Southeast Asia Tuesday for string of summits with Asian leaders, a visit he had hoped would highlight progress in his seven-year charm offensive in the region — but was instead overshadowed by the fight against Islamic terrorism in the Middle East.

The terrorist attacks in Paris and talk of reprisals against the Islamic State threatened to cloud Obama’s good-news tour to the Philippines and Malaysia this week. While Obama was ready to talk up his freshly inked trade deal and military cooperation in Asia, the rest of the world was looking for leadership on the Islamic State’s relentless terror spree.

READ: Obama decries critics who ‘pop off’ with opinions on IS

It was hardly the first time the Middle East has kept Obama from making the pivot his administration once imagined would be central to his foreign policy legacy. Instead of ending under Obama’s watch, old conflicts in the Middle East have morphed into new, equally intense ones. Instead of gradually moving to center stage, Obama’s agenda in Asia has had to compete for time and attention.

The White House was determined this week to show it would keep a steady focus despite the tragedy that consumed European allies. Obama left Washington as scheduled just hours after the night of violence in Paris left 129 people dead and hundreds more injured. He has not changed his plans for the nine-day trip that began Sunday at the Group of 20 summit in Antalya, Turkey.

Still, at a press conference before he departed for Manila, Obama was asked only about his strategy for countering Islamic terrorism.

“This is another variation on the same question,” he said, exasperated by the repetition. “Let me try it one last time.”

At back-to-back summits in Manila and Kuala Lumpur, Obama was expected to highlight recent evidence of long-sought progress in Asia.

Recent elections in Myanmar, where activist Aung San Suu Kyi’s opposition party won overwhelming victory, were a boost for Obama’s foreign policy team, which has been deeply involved in guiding the shift away from military control.

On Tuesday, Obama was slated to tour the BRP Gregorio del Pilar, a Philippine Navy frigate once owned by the U.S. and now considered one of the most advanced in Southeast Asia.

The visit was staged to call attention to a defense cooperation agreement cemented last year that gives the U.S. new access to some Philippine military bases. The compact is part of a broader effort to strengthen U.S. presence — and counter China — in the disputed waters of the South China Sea.

The most notable accomplishment on Obama’s list is the completion of the Trans-Pacific Partnership, the massive free trade agreement at the heart of the administration’s Asia policy.

Obama will meet with leaders of the other 11 member countries in Manila on Wednesday to mark the milestone — although the celebration will be somewhat muted. The U.S. and other countries must still overcome considerable political opposition to win final ratification.

While Obama can point to recent steps forward in Asia, he has little to show on the other side of the equation.

As he looks as his final year in office, Obama has begun to acknowledge that the conflicts he once cast as hangovers of the past will be left for a future president. Obama no longer plans to withdraw all U.S. troops from Afghanistan by the time he leaves office. The rise of the Islamic State has pushed the U.S. gradually deeper into the warzones in Iraq and in Syria, where Obama has deployed a small force of ground troops for the first time.

Meanwhile, the White House says it sees no prospects for a peace deal between Israelis and Palestinians in the near future.