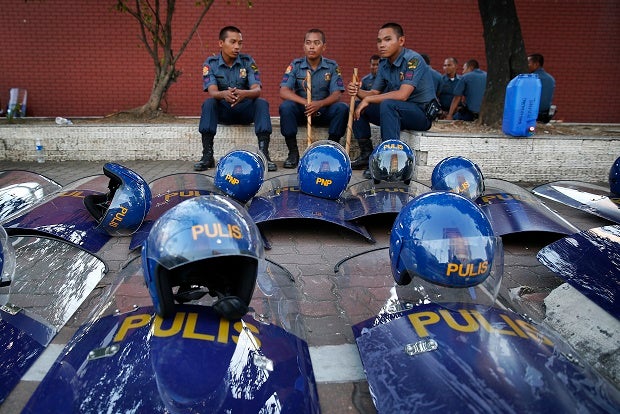 Police officers sit behind rows of riot gear outside of the Asia-Pacific Economic Cooperation (Apec) venue in Manila, Philippines, Monday, Nov. 16, 2015. Providing security for a summit of world leaders including President Barack Obama and his Chinese counterpart is a huge undertaking for any country. For the Philippines, which is hosting this year’s Apec meeting, the challenges are even bigger and under renewed scrutiny in the wake of the Paris terrorist attacks. AP

MANILA, Philippines — Providing security for the leaders of Asia-Pacific nations including the United States and China is a huge undertaking for any country. For the Philippines, which is hosting this year’s Apec summit, the challenges are even bigger and are under renewed scrutiny following the Paris attacks.

The developing Southeast Asian nation has assembled more than 30,000 military, police and civilian personnel in its largest security operation in years for the meeting in its capital, Manila. Leaders of the 21 countries and territories that make up the Asia Pacific Economic Cooperation forum began arriving Monday.

The extensive preparations reflect a variety of perceived threats but also are meant to address concerns the Philippines might not be up to the task. Its military is one of the most poorly funded in Asia and its south is a cradle of insecurity known for banditry and Islamic militants. Marxist insurgents are still active in parts of the country.

National police chief Ricardo Marquez said security forces have prepared for all possible threats, including terrorism, typhoons, fires, earthquakes and food poisoning. In metropolitan Manila, licenses for civilians to carry guns are suspended for the summit week. Rallies will not be allowed without a permit or near APEC venues.

“Everything is considered: security, public order, emergency preparedness,” he said.

Some of the anxiety about security might be misplaced. A high-profile visit in January by Pope Francis, who drew millions of devotees in the Roman Catholic bastion, went by without major incident. The government says no stone will be left unturned to ensure the safety of the 7,000 officials and other participants during the APEC meetings, which wrap up Friday.

Security measures have intensified since the attacks in Paris last Friday that killed at least 129 people, in the deadliest violence to strike France since World War II.

Hours after the attacks, President Benigno Aquino III convened a meeting of his security ministers and put the entire 160,000 national police force and the 125,000-strong armed forces on full alert.

Aquino said “no credible threat” to the APEC meeting had been registered. But he wanted to ensure that all preparations were in place and all contingencies had been planned for, presidential spokeswoman Abigail Valte said. “It is better to be over prepared than caught under prepared,” Valte said.

Organizers acknowledge inconveniences are in store for residents of metropolitan Manila, already notorious for its clogged traffic.

The government is encouraging Filipinos to take a vacation outside of Manila or to stay home and just watch the news.

Half of the APEC leaders will come from the G20 economic summit in Turkey, and many including President Barack Obama will rush from Manila to Kuala Lumpur, Malaysia, for an East Asia summit, taxing the capacity of Manila’s international airport.

More than 1,700 domestic and international flights have been canceled to ensure leaders have smooth arrivals and departures.

Manila’s busiest thoroughfares will be narrowed by exclusive lanes for the convoys of officials. The government has announced holidays for schools and state workers. A “no sail zone” has been declared in Manila Bay near the sprawling entertainment and conference complex used for APEC.

Left-wing activists, though, have vowed to shatter what they say is the veneer of peace and order with protests against a plethora of issues, from trade globalization that they say deepens poverty to China’s assertiveness in the disputed South China Sea.

Police say they’ll adopt a policy of “maximum tolerance” for protesters but won’t allow them to spoil the leaders’ meeting.

Last Thursday, days before the arrival of APEC officials, activists started embassy-hopping, picketing the embassies of the United States, Japan and China.

Aquino will give APEC leaders and their spouses national shirts called Barong Tagalog that will be worn for their traditional group picture.