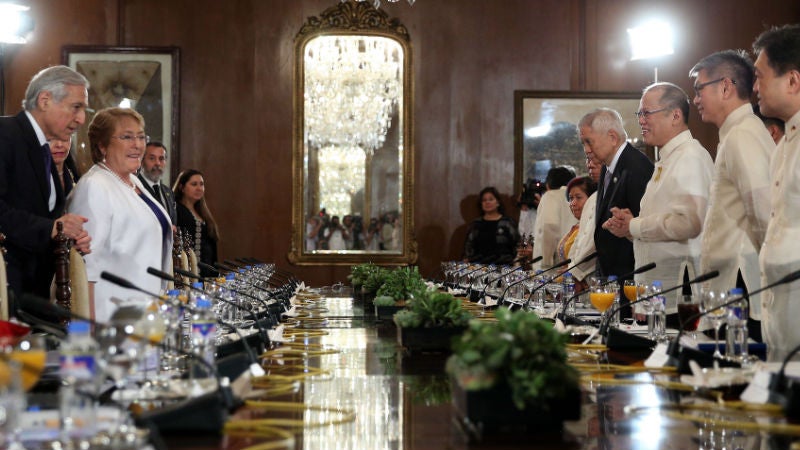 CHILE-PHILIPPINES MEETING President Aquino and members of his Cabinet hold an expanded bilateral meeting with Chilean President Michelle Bachelet (left) and her delegation at the Aguinaldo State Dining Room in Malacañang. Bachelet, Chile’s first woman President, who is on a state visit, will also attend the Asia-Pacific Economic Cooperation summit. MALACAÑANG PHOTO BUREAU

SHARING a common fight to protect democracy, President Aquino and Chilean President Michelle Bachelet on Monday vowed to strengthen the partnership between their two countries, which will mark 70 years of diplomatic relations next year.

“You yourself experienced what it was like to stand up to a dictatorship and demonstrated the sacrifice required to build a vibrant democracy,” Mr. Aquino said.

“As individuals who had to endure hardship and exile under our countries’ dictatorial regimes, you and I know full well the terror that tyranny brings. By regaining our liberties, our function has been to make democracy inclusive for everyone.”

Mr. Aquino added: “If we fail to do so, there might be that temptation for some quarters to return to some form of authoritarianism.”

Bachelet’s father, a military general, was murdered in 1974 during the rule of dictator Augusto Pinochet. Bachelet and her mother were exiled a year later.

Bachelet’s visit led to the signing of two agreements where the two countries would help each other in addressing calamities and establishing a “flexible” trade agreement.

The two leaders witnessed the signing of an agreement to strengthen bilateral cooperation on disaster risk reduction and management. The two sides also signed a “feasibility study” to evaluate the benefits of a free trade agreement.

“Our wish is to start negotiation during the first semester of 2016 because we think it would be good way to commemorate the 70 years of diplomatic relations between both countries,” Bachelet said.

Both leaders also noted how Energy Development Corp., the largest producer of geothermal energy in the Philippines and the second largest in the world, had invested in geothermal exploration in Chile’s Maule region.