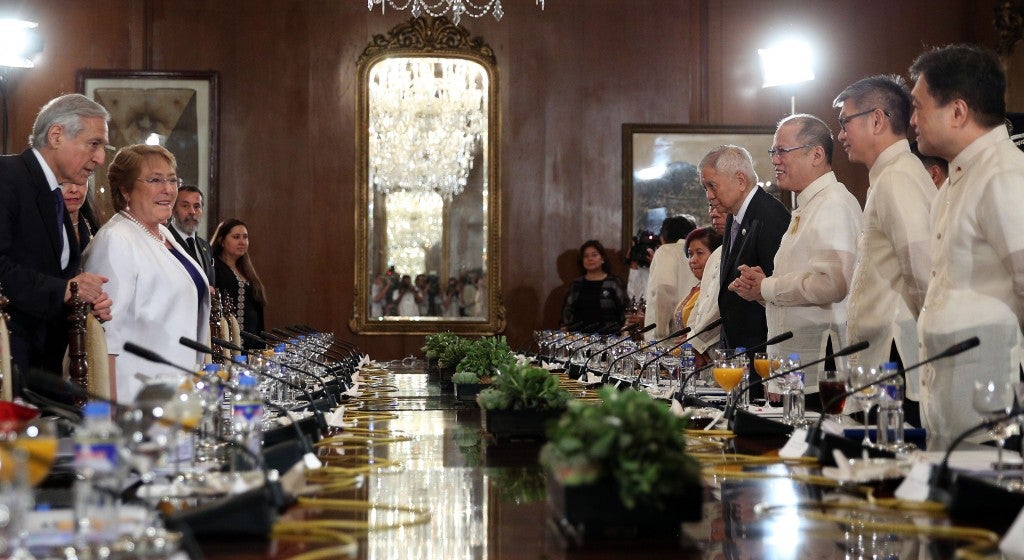 President Benigno S. Aquino III exchanges views with Her Excellency Michelle Bachelet, President of the Republic of Chile, during the expanded bilateral meeting at the Aguinaldo State Dining Room of the Malacañan Palace for the State Visit to the Philippines on Monday (November 16, 2015) at the sidelines of the APEC Economic Leaders Meeting in Manila. (Photo by Joseph Vidal / Malacañang Photo Bureau)

The Philippines on Monday signed a memorandum of understanding in Malacañang with the government of Chile for cooperation in disaster risk reduction and management.

The National Disaster Risk Reduction and Management Council (NDRRMC), in a news release, said that the signing is one of the highlights of the state visit of Chilean President Michele Bachelet, who is also in the country for the Asia Pacific Economic Cooperation summit.

The signing was witnessed by President Benigno Aquino III, Bachelet, Foreign Affairs Secretary Albert del Rosario, NDRRMC Undersecretary Alexander Pama, along with other key officials from the governments of the Philippines and Chile.

Gazmin welcomed the agreement of the two governments and looked forward to working with Chile in improving their information-sharing mechanisms on disaster risk reduction and management.

“Since both countries are located within the Pacific Ring of Fire, we share similar hazards and can, therefore, examine our experiences and learn from each other in areas of hydro-meteorologic and geologic hazards. We can follow their example in the enhancement of technology and capacities to substantially reduce mortality in the wake of major earthquakes and tsunami,” he said.

The NDRRMC said the partnership will focus on the exchange of knowledge and experiences through experts and professionals as well as the conduct of exercises in the sharing of early warning information, public policies on disaster mitigation, and the promotion of inter-economic cooperation among Apec member economies for DRRM.

The Philippines will share its experiences and expertise in dealing with hydro-meteorological hazards as well as the pre-disaster risk assessment system. Chile will be sharing its systems and best practices in geologic hazard preparedness and response.