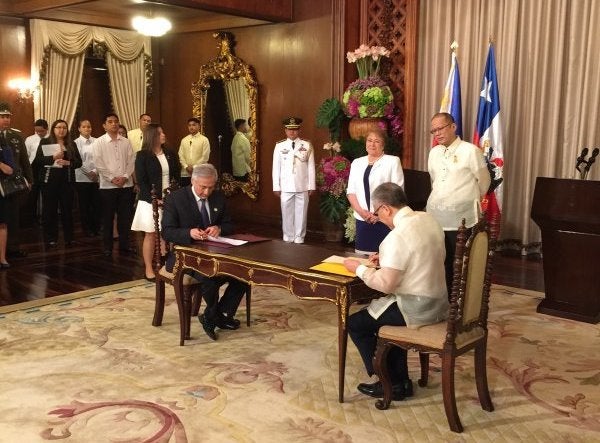 Photo from the Official Gazette

President Benigno Aquino III and Chilean President Michelle Bachelet on Monday took the first step in drawing up a free trade agreement between the Philippines and Chile.

The two heads of state witnessed the signing of a letter of intent on joint study for free trade and agreement between Philippines and Chile and a memorandum of understanding (MOU) on disaster risk reduction and management (DRRM).

“The President and I had engaging and broad ranging discussions on the need to strengthen our relationship and also to explore new opportunities for cooperation,” Aquino said during a joint press conference with Bachelet at Malacañang’s Reception Hall.

“In the bilateral area, Chile and the Philippines are seeking to promote and diversify trade and because of that we are initiating talks regarding free trade agreement,” Bachelet added. 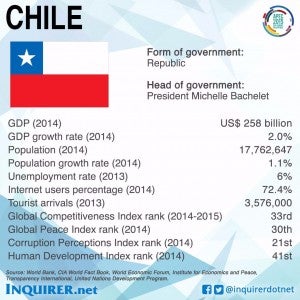 “In order to take the first step we sign the letter of intent in which we commit ourselves to conclude a feasibility, joint study to evaluate the potential benefits of a free trade agreement. Our wish is to start negotiation during the first semester of of 2016 because we think it would be a good way to commemorate the 70 years of diplomatic relations between both countries,” she explained.

Aquino said the letter of intent “[mandates] the Department of Trade and Industry of the Philippines and the general directorate for economic relations of Chile to continue talks in 2016 and develop a framework for mutually beneficial agreement between our countries.”

Bachelet is in the Philippines for a state visit and to attend the Asia-Pacific Economic Cooperation (Apec) Summit, which is hosted by Manila this year.