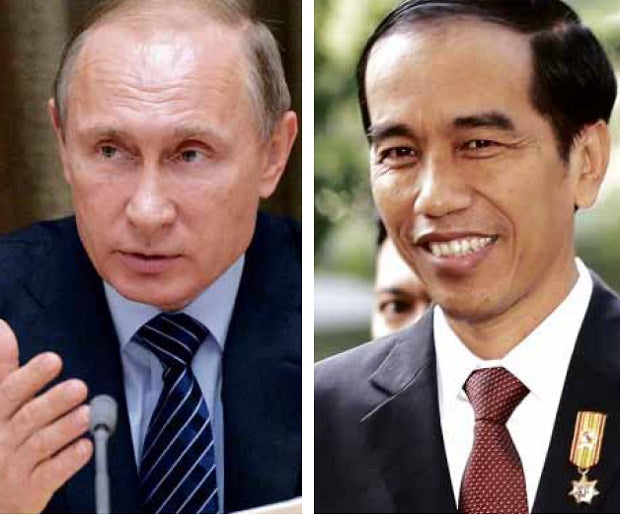 Russian President Vladimir Putin and Indonesian President Joko Widodo  are not coming to Manila next week for the Asia-Pacific Economic Cooperation (Apec) summit.

The Department of Foreign Affairs (DFA) confirmed Thursday that Widodo is not attending the summit, while the Kremlin said Putin has decided to send Prime Minister Dmitry Medvedev in his stead.

Speaking at a news briefing, Foreign Undersecretary Laura del Rosario said Widodo decided to back out from the Apec summit to attend to domestic issues.

“I just got a verbal message from his senior official now that there are things in Jakarta that need his attention,” Del Rosario said.

The trade minister of Indonesia, however, will be attending the ministerial meeting before the leaders’ summit on Nov. 18 and 19, Del Rosario said.

An Indonesian foreign ministry spokesperson confirmed that Widodo is not going to Apec and that Kalla is going in his stead.

Del Rosario said Widodo was among the first Apec leaders to confirm their attendance at the summit.

“He (Widodo) is coming from the G-20 meeting in Turkey. Then, he has to attend the Asean (Association of Southeast Asian Nations) summit in Kuala Lumpur,” Del Rosario said.

“Somehow, I think he decided to get that period in between to go home to address some domestic issues,” she said.

G-20 (Group of Twenty) is an international forum for the governments and central bank governors of 20 major economies in the world. Its meeting will be held in Antalya, Turkey, from Nov. 15 to 16.

The Asean summit in Kuala Lumpur will be held from Nov. 18 to 22.

Widodo cut short his first official trip to the United States last month to oversee his government’s efforts to combat the fires that have caused school closures, flight cancellations and pollution levels to spike.

“The haze has really crossed borders. So I think that is one he’s trying to look into,” Del Rosario said.

“We will miss him in the sense that he won’t be able to deliver his interventions himself during the retreat, but I think the Indonesian delegation their national positions will be reflected in the documents that will come out in the senior officials, ministerial meetings and the leaders’ statement,” she said.

A spokesperson for the Kremlin said Putin decided to sit out Apec and send Medvedev instead because the prime minister had a series of meetings planned in the region anyway.

“I can confirm that the prime minister will represent Russia at the Apec summit in Manila,” russia.tu quoted Kremlin spokesperson Dmitry Peskov as saying.

“In this respect from the viewpoint of optimization of schedule of the top leadership of the country, the president has made a decision not to go that far together with the premier with literally 102 days’ difference,” Peskov added.

Del Rosario said that the “Indonesian foreign ministry’s highest level has not confirmed the nonattendance of President Widodo. The info on nonattendance came from another level.” With reports from Yuji Vincent Gonzales, Inquirer.net and Jakarta Post/Asia News Network