TOFA-NY at 5: ‘Proud to be Filipino wherever we may be’ | Global News
Close
menu
search

TOFA-NY at 5: ‘Proud to be Filipino wherever we may be’ 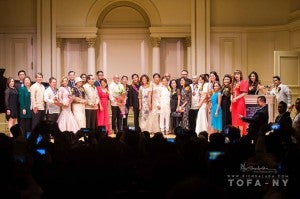 This year’s 15 exceptional individuals and organizations, together with the evening’s speakers, entertainers and guests. At far right on podium is TOFA-NY founder Elton Lugay. PHOTOS BY RJ ENSALADA

NEW YORK CITY—“Let us teach our people again to be proud that they are Filipinos.”

These words were first voiced by diplomat and statesman Carlos P. Romulo in the 1960s and rearticulated by Consul General Mario de Leon Jr. during The Outstanding Filipino Americans in New York awards night at Carnegie Hall on October 31.

Thirteen individuals and two organizations were conferred honors for projecting a “positive image of Filipinos in America” through their talent, skills and heart for service, said the Ambassador.

The 2015 TOFA-NY award recipients are: 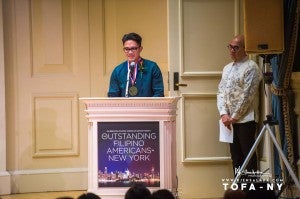 It used to be, said De Leon, that Filipinos were a “struggling community.” This was in the early 1880s when they were mariners and farm settlers in Louisiana and into the 1920s and ‘30s in California during the Manong Generation.

Filipinos are now a “rising force” in American society, he said. “It is time for us to claim our place in the U.S. as an emerging community worthy of positions of leadership, influence and authority. Indeed we should be proud of being Filipinos wherever we may be.” 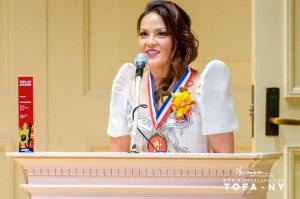 The honorees came with their own words of grace, gratitude and abundant pride about being both Filipino and American.

Lawyer Carmelyn Malalis said her “family and heritage inspire my work” at the New York City Commission on Human Rights. Community organizer Steven Raga spoke about how he continues to engage in intergenerational opportunities where “young and seasoned leaders (can) collaborate.” Entrepreneur John Gadia recalled how it was to be jobless in New York and how he grew his production company from a hobby into one of the community’s biggest concert promoters. 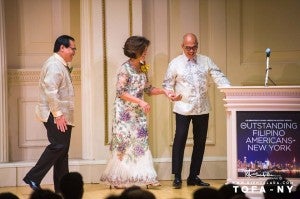 Mark Bustos, who offers free haircuts to homeless people and veterans, spoke about chasing your own dreams even if they are not exactly the dreams your parents have for you. Dr. Kevin Nadal said he became a professor because he never had a Filipino American professor and thought “I could change that for future generations.” Young singer Gail Banawis thanked her parents and TOFA for “giving me more confidence to pursue my dreams as an entertainer.”

Soprano Katrina Saporsantos dedicated her award to musicians pushing for the preservation of Philippine classical music. Nicole Ponseca said she opened her two restaurants, Maharlika and Jeepney, so that through food, Filipinos will “be recognized.” Leyte-born Dr. Richard Holsman thanked “God Almighty for giving me the strength, courage and dedication” to be a healer through his physical therapy clinics. 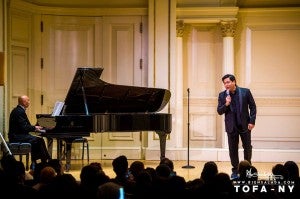 Trans woman and gay rights advocate Chelle Lhuillier shared how she was removed as a schoolteacher because of bias and discrimination and vowed to use her visibility to “amplify the voices of the marginalized LGBT community.” Young politician from New Jersey, Council Member Jonathan Wong, paid tribute to Filipinos’ proud heritage of sacrifice, commitment and excellence as exemplified by boxing great Manny Pacquiao.

The two organizations that received awards were Makilala, the first Fil-Am talk show in the New York area, and the PAGASA Social Foundation, Inc. for seniors.

Makilala TV co-founder Cristina DC Pastor thanked Queens Public Television and Manhattan Neighborhood Network for providing a platform so that Filipino Americans can engage in timely and meaningful conversations. Consuelo Almonte talked about PAGASA’s advocacy to help seniors enjoy their Golden Years through music and storytelling, and other creative activities.

Founder and executive producer Elton Lugay noted how this year’s TOFA-NY now on its fifth year, falls on a Halloween, and how this made the celebration even more exciting. 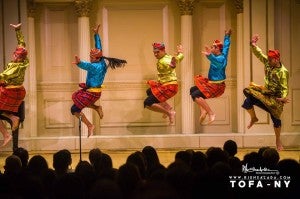 Parangal Dance Company in a spectacular display of precision and footwork.

“Thirteen individuals and two organizations inspired us this year,” he said. “There is empowerment in sharing their success stories.” Lugay is joined by new board members Edwin Josue and Jerry Sibal, who are known throughout the community for their support of the arts, such as the Noli Me Tangere Opera and the Philippine Gold exhibit at the Asia Society.

One of the keynote speakers, CEO and philanthropist Loida Nicolas Lewis, commended TOFA-NY’s efforts in organizing a yearly event that celebrates Filipino American History Month in a festive and yet relevant and significant way. She said the event brings Filipinos together to share and applaud one another’s success.

As emcee, Asia’s King of Talk Boy Abunda kept the program lighthearted and relaxed with his funny commentary, sharp wit, and high energy.

AARP returned for a second consecutive year as title sponsor, recognizing how TOFA-NY has “raised the profile of the Filipino American community” and for honoring “15 exceptional individuals and organizations.”