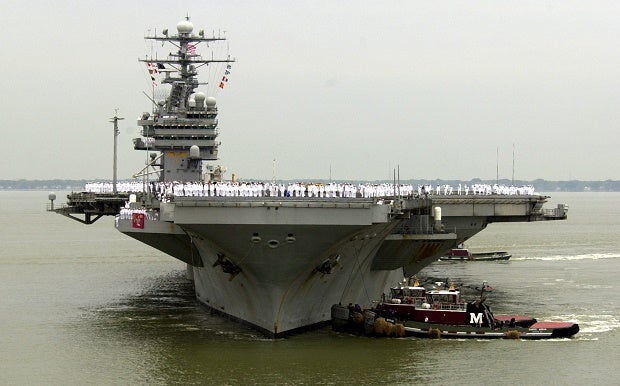 ABOARD THE USS THEODORE ROOSEVELT — In a symbolic swipe at China’s muscular moves in the South China Sea, US Defense Secretary Ash Carter visited an American aircraft carrier in the disputed waterway.

Carter, who was in Malaysia for two days of talks with Asian defense ministers, used the visit to the USS Theodore Roosevelt to amplify the US view that China is making excessive claims that nearly all of the South China Sea as its territory.

Carter also signaled that the US will keep a strong naval presence in the region in support of nations seeking to preserve stability. He flew aboard the carrier in a V-22 Osprey from a base in the east Malaysian state of Sabah, which is situated on the northern portion of Borneo.

In announcing his visit Wednesday, Carter called it a “symbol of our commitment” to focusing more on US interests in the Asia-Pacific following more than a decade of wars in the Middle East.

Malaysian Defense Minister Hishammuddin Hussein accompanied Carter to the carrier, highlighting US efforts to strengthen defense partnerships in the Asia-Pacific. Malaysia is among several countries that claim a portion of the South China Sea and disagree with China’s building of artificial islands.

The Pentagon also is interested in making arrangements with Malaysia for more regular access to the naval base at Sabah for US aircraft carriers.

It is not unusual for a defense secretary to visit an aircraft carrier. But Carter’s visit drew extra attention because of the ship’s location and the tensions surrounding China’s reclamation work, which Adm. Harry Harris, head of US forces in the Pacific, has likened to building a “great wall of sand” with the potential for confrontations to escalate into armed conflict.

Carter and Hussein were expected to observe the carrier’s fighter jet operations and be briefed by Navy officers on their current and recent maneuvers.

The “TR,” as the carrier is commonly called in the Navy, is the flagship of a strike group of ships that includes a cruiser, the USS Normandy, as well as three destroyers; the USS Winston S. Churchill, the USS Farragut and the USS Forrest Sherman.

The strike group had been deployed in the Middle East earlier this year and most recently conducted exercises in the Indian Ocean with Indian and Japanese naval forces. In late October the TR made port visit at Singapore. It is heading to its new homeport at San Diego.

Last week the U.S. sent a guided-missile destroyer, the USS Lassen, on a brief patrol inside the 12-nautical-mile radius that China claims as its territorial waters around Subi Reef, an artificial island built by the Chinese. The Chinese denounced the move as provocative and illegal.

Harris has said that while Vietnam, the Philippines, Taiwan and Malaysia have also done land reclamation in areas of the South China Sea where they have territorial claims, that work is dwarfed by the size and scale of China’s buildup. He said on July 24 that in a period of 18 months the Chinese had reclaimed almost 3,000 acres.

Carter, speaking Wednesday in the Malaysian capital of Kuala Lumpur, called on all claimants to halt reclamation. He also noted that in a visit to the White House in September, Chinese President Xi Jinping said China is not intending to pursue militarization of its artificial islands.

“We all must mean what we say,” Carter said.

The US contends that under international law the artificial islands built by China are high seas. That means they are not eligible for the 12-nautical-mile zone granted to maritime features such as naturally formed islands capable of sustaining human habitation or economic life.

The issue is important on several levels, including the concerns expressed by the US and others that China is trying to establish a de facto 12-mile territorial zone around these artificial islands by building airstrips and other facilities for military forces.

The issue has become one of the most vexing problems in US-China relations.

Read Next
Youth volunteers to hold 30-day peaceful protest on Spratlys
EDITORS' PICK
Smart poised to turn PH into ‘Smart 5G country’ with nationwide rollout
New Vatican ambassador to PH named
We don’t want gov’t to fail, because it’s all of us who will suffer and die — Robredo
Duterte keeps Metro Manila under GCQ for entire October
Get 80% OFF Ignite 2020 Cyber Tickets starting 28 September
Water remains our saving grace right now
MOST READ
Duterte keeps Metro Manila under GCQ for entire October
Fernandez: Velasco camp ‘betrayal’ pushes call to retain Cayetano as Speaker
Mayor Treñas tells Locsin: Iloilo City is much better than what you think
Palace: Some cities in Metro Manila eligible for MGCQ
Don't miss out on the latest news and information.