Was ransom video released in time for Apec? PNP ‘ready’ for any eventuality 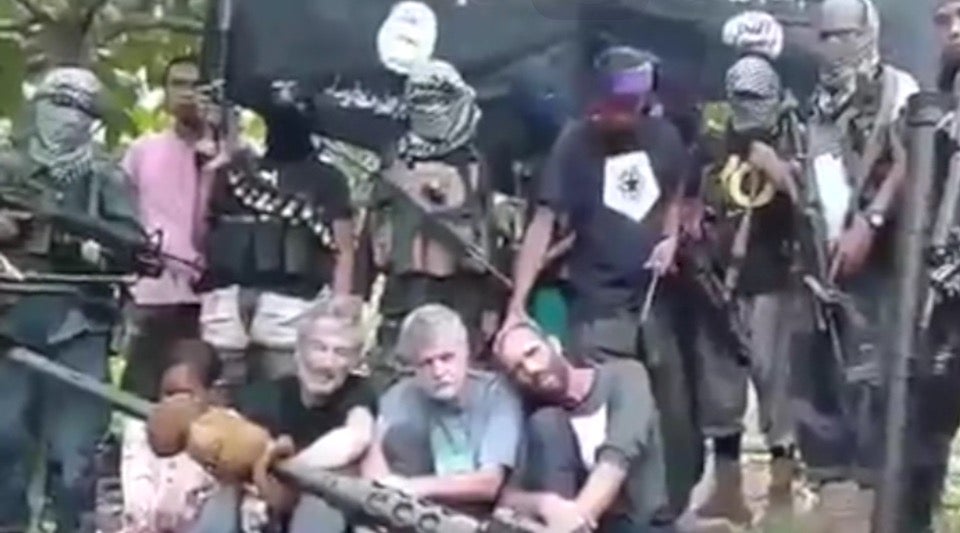 This screen grab from a video obtained by SITE Intelligence Group allegedly shows the four victims of kidnapping from Samal Island (seated) surrounded by armed men. Behind them is the flag of the Isis terrorist group.

Was the video of the terrorists demanding P4-billion ransom for the release of Samal Island hostages released in time for the Asia-Pacific Economic Cooperation summit?

If it were meant to threaten the security of world leaders visiting the country, the Philippine National Police said the police were prepared for any eventuality during the world leaders’ meeting from Nov. 17 to Nov. 20.

“We are preparing for all possible situations that may happen during Apec. We discuss contingencies so proper response will be accorded just in case,” Chief Supt. Wilben Mayor said on Wednesday.

“Whole of government approach will be applied for the Apec. At least 20 government agencies will be working together. We should show the world that we are ready for this.”

The video was released by the terrorists on Tuesday. It showed the four hostages surrounded by armed men in black garb asking the government and embassies to pay the P4-billion ransom.

Of the four hostages, three are foreigners. Canadians John Ridsdel and Robert Hall and Norwegian Kjartan Sekkingstad asked their respective embassies to pay P1-billion ransom for each of them.

But Mayor said it was still premature to conclude that the bandits were from Abu Sayyaf, a kidnap-for-ransom group operating in Mindanao.

“Kahit ano man silang grupo, as long as nahuli sila, they will be sanctioned under our laws,” he added. Julliane Love de Jesus/RC

No ransom to be paid for Samal kidnap victims–PNP

Chilling effect on media? Roque says ABS-CBN’s business is not news, but entertainment