PH among countries of special concern in campaign vs impunity 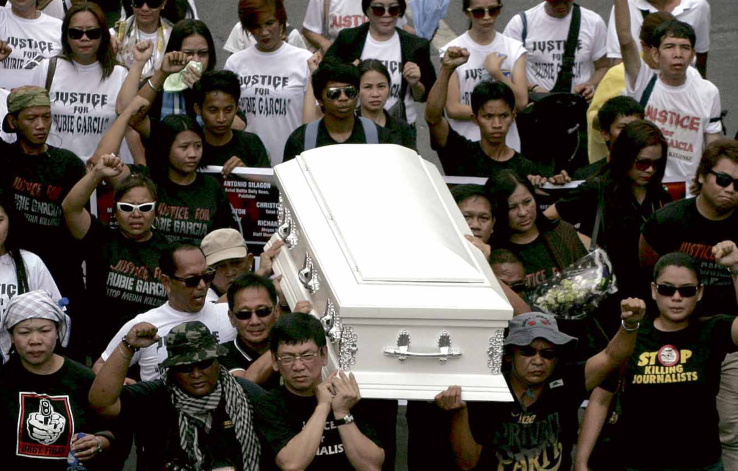 ILIGAN CITY — The Philippines is among the four countries throughout the world that is the focus of this year’s global campaign by freedom of expression advocates against impunity on the killing of journalists.

The Brussels-based International Federation of Journalists (IFJ), a global organization representing some 300,000 journalists, in a statement said its annual campaign, along with other freedom of expression networks, seeks to “hold world governments and de facto authorities accountable for impunity records for crimes targeting journalists.”

“Murder is the highest form of these crimes but all attacks targeting journalists that remain unpunished must be denounced… There can be no press freedom where journalists work in fear,” the IFJ said in a statement.”

The IFJ noted that on a global scale, only one in 10 cases of media deaths are investigated.

“Impunity not only endangers journalists, it imperils democracy and the right for the public to know. It is more than time for bringing those who kill the messengers to justice and we must relentlessly hold governments accountable for this,” said IFJ President Jim Boumelha.

He urged IFJ affiliates to get involved in the campaign “to show solidarity to those who struggle for telling the truth and their loved ones.”

The global campaign runs from Nov. 2 until Nov. 23.

Nov. 2 was declared by the United Nations in December 2013 as International Day to End Impunity for Crimes Against Journalists, which is also observed as All Souls Day in the Philippines. It also marked the killing in Mali in 2013 of two reporters of Radio France Internationale (RFI), Ghislaine Dupont and Claude Verlon.

Nov. 23 marks the sixth year after the grisly Maguindanao massacre that claimed 58 lives, 32 of them journalists and media workers. The massacre was the worst single attack on the press.

The IFJ campaign puts specific emphasis on Mexico, the Philippines, Ukraine and Yemen owing to the gravity of the situation of impunity in these countries.

In the Philippines, the IFJ notes that not a single person has been convicted for their involvement in the 2009 Maguindanao massacre. Some 193 people were accused as having a role in the crime, 18 of whom carry the surname Ampatuan.

“The Ampatuan Massacre remains the key focal point of the Philippine media’s battle with impunity, but it must be stressed that the killing of journalists didn’t start on November 23, 2009, nor did it end there,” the IFJ emphasized.

“The fallout for the media continues – as do journalist murders with shocking regularity… which makes the country the deadliest for journalists in Southeast Asia,” the group added.

The NUJP recorded 32 killings since the 2009 massacre, five of these in 2015. All these add up to 169 killings since 1986 when press freedom was regained after the ousting of strongman Ferdinand Marcos.

“This year there was a small breakthrough when the two accused masterminds in the killing of journalist Gerry Ortega were arrested in Thailand on unrelated charges. They have since been deported to and detained in the Philippines while awaiting trial for their role in the 2011 murder of Ortega,” the IFJ notes.

In Mexico, 50 journalists and media workers lost their lives in the line of duty since 2010. Of these cases, around 89 percent are not solved, the Mexican National Human Rights Commission said.

In Yemen, the IFJ recorded 15 journalists killed since 2011, 10 of whom died in 2015. None of the perpetrators have been brought to justice. In addition, 14 reporters remain captive as a consequence of the fighting between the Houthis, the Saudi led-coalition and al-Qaida.

In Ukraine, the IFJ cited eight killings, 125 intimidations, 322 assaults, 162 attempts of censorship and 196 cases of impeding activities since 2014. Of 54 investigations launched, only three cases were passed to the courts. In 2000, the body of Ukrainian journalist Georgy Gongadze was found beheaded in a forest outside Kiev.

In 2015, the IFJ recorded 86 killings of journalists and media staff throughout the world.

Last year, a journalist was killed every 10 days, the IFJ said, most of whom— 94 percent —are men, and are locals of the country. Only six percent were foreign correspondents.

Some 41 percent of killed journalists worked in print media, the IFJ further noted.

In the Asia-Pacific region, India and Bangladesh are also countries of special concern, apart from the Philippines. Of the 86 media deaths this year, 23 are in the region.

India has seen six journalist murders this year while five bloggers have been killed in Bangladesh.

“In Bangladesh where the press is not free, bloggers fill in the gap of informing the public,” Jane Worthington, deputy director of IFJ Asia-Pacific, explained.

In 2014, 39 media deaths were recorded in the region, with Pakistan topping the list with 14; also the highest throughout the world.

The Asia-Pacific was also the deadliest region worldwide in 2014.