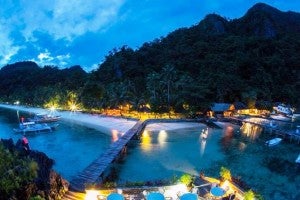 A private sanctuary, Sangat.Ph is teeming with wildlife. It is host to divers from all over the globe who seek expertly guided wreck diving to sunken World War II warships. Above photo is taken from the floating bar built on top of a rock formation, where wreck divers hang out after a day of exploration. CONTRIBUTED PHOTO

Coron Bay is fast becoming one of the world’s best dive destinations due to the extraordinary wreck diving opportunity it offers. Twenty-four Japanese ships were sunk by American forces during World War II. Eleven shipwrecks have been located in scuba diving depths ranging from 25 to 45 meters. The ships vary from 25 meters long to a massive 180 meters, mostly in good condition. Deck penetration is possible for experienced wreck divers.

Visibility in Coron Bay ranges from 7 and 30 meters depending on the strength of the tidal flow. On a full moon and new moon, visibility is reduced. The tidal flow is less, and visibility is best between the 1/4 to 3/4 moons. The main concentration of ships sank in the vicinity of Tangat island, known locally as Sangat Island. Today, it is host to divers all over the globe.

Thirty years ago, a professional diver who worked for a British marine archeological group, had a joint venture with Philippine National Museum. Andy Pownall was then in charge of the surveying and excavation of ancient Chinese artifacts that had sunk throughout Northern Palawan centuries before.

He developed a lifelong passion for searching shipwrecks to retrieve valuable mementoes of the past. Andy fell in love with the islands; he bought the property now known as Sangat Island Dive Resort, and became a Filipino citizen. 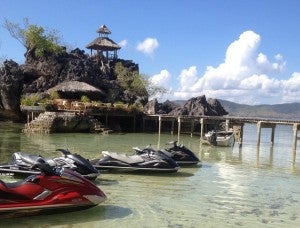 A fleet of speedboats and jet ski near the Rock Bar, used for safari tours around the islands, are available with owner Andy Pownall or divemaster Jojo Lorenz as guide. A newly acquired 12-seater speedboat can get to nearby El Nido island in two hours, regularly five hours by outrigger banca. CONTRIBUTED

Speaking fluent Filipino, Andy employs local residents at the private island he developed 24 years ago. He was joined by German diver, Jojo Lorenz, and both have provided expert guidance to divers who want to visit the sunken memorial of World War II and various reefs.

At 0900 hours, the strike force reached Busuanga Island, Palawan and found 12 large enemy ships anchored in and around Coron Bay. After a 15-minute attack they left behind a carnage of burning and sinking ships.

The big transport vessel Kogyo Maru (160 meters long) carried vital aircraft spare parts for land-based aircraft damaged during the Battle of Philippine Sea. The freighter Olympia Maru and oiler Kamoi tried to conceal their presence in the narrow stretch between Sangat Island and Lusong Island. West of Lusong Island, the seaplane tender Akitsushima and the oiler Okikawa Maru were swinging at their anchors in the slight tidal current. 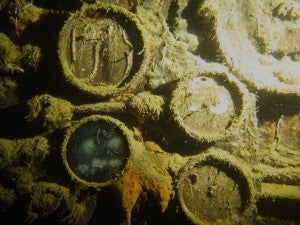 Shipwreck diving is a swim back in time, a reminder of the lives that went down with this vessel. CONTRIBUTED

Located about 170 nautical miles southwest of Manila, Coron Bay was supposedly a safe assembly area for Japanese shipping. The cargo ship Kyokuzan Maru and two others were anchored in a small bay on the northeast coast of Busuanga. When the American task force surprised them, the squadron of Curtiss Helldivers took on Akitsushima and Okikawa Maru. Although the seaplane tender was heavily armed and opened fire, she was no match to the skilled dive bomber crews.
A second bomber squadron teamed up to sink the other ships. Ten dive bombers took on Olympia Maru. She sank and became a graveyard for 19 crewmembers. Kogyo Maru, 180-meters long cargo ship, went down with no fewer than 39 seamen. She now lies on her starboard side, 36 meters deep with her bows pointing southwest.

Irako, 143-meter long, was armed with flak guns and responded ferociously but she, too, was annihilated and sent to the bottom 43 meters deep. The others suffered the same fate. The final casualty of the morning-long slugfest was the Kyokuzan Maru, attacked by the planes from USS Lexington. Only the badly damaged oiler Kamoi made it back to Hongkong. 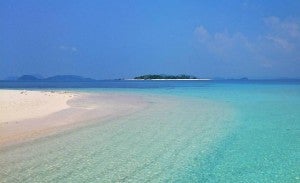 Island hopping on privately owned islands, going all the way up west of Palawan, just before Vietnamese jurisdiction. PHOTO BY PORSHA SEECHUNG

The Japanese war ships that sank off the coast of Calamian Bay in Palawan remains a major attraction to divers all around the globe. Some of them have grown massive coral reefs that became home to abundant marine life. Andy frequently brings his guests island hopping all the way up to the western side of the Philippines, close to Vietnam. The privately owned islands look magnificent, the water changing in color from emerald green to bright turquoise blue, clear as glass.

The private sanctuary, Sangat Island Dive Resort is located 20 miles away from the mainland of Coron, accessible via Busuanga airport. Shuttle services bring the guests via a mountainside ride to the Lualhati loading area.

There, Andy’s team awaits eager divers and those just curious to learn diving for the first time. He swoops them across majestic rock formations and lime canyons that serve as fortress to this island. Once there, a fleet of jet skis, speed boats and the more earth-friendly kayaks and paddle boards await visitors who can engage in all levels of watersports adventure. 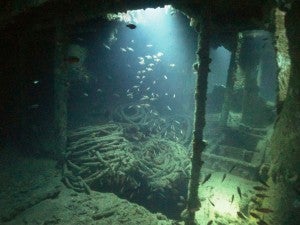 Inside wreck diving, light pierces through open holes from ceiling, easily accessible by divers with the expert guidance of Sangat Island divemasters. Visibility varies with the time of the month. CONTRIBUTED

According to dive master Jojo Lorenz, beginners can easily learn to dive in some visible wrecks by merely snorkeling, some decks reachable with depth of only 9 meters. Big openings enable beginners to enter some compartments. A cathedral-shaped cave has holes in the ceiling where light cuts through.

Penetration of the decks, however, must be under the expert guidance of divers who have lived most of their lives in the island.

Sagat Island owner Andy Pownall also raises wild boars and monkeys on his farm in addition to locally grown vegetables and fruits. At times, he take visitors on his ATV to hunt wild boar for a celebration meal. For a true wildlife safari experience and further information about dive sites, visit the website www.Sangat.ph.

Read Next
Special ‘New PH Cinema’ screenings set in New York
EDITORS' PICK
OPINION: Mischief Reef – where it all started
Tired of your Wi-Fi signal problems at home? Here’s a solution!
Infants bundled off; no one hurt in PGH fire
Fire-damaged PGH calls for donations
Must-know scams to avoid when buying cars
POVA x Mobile Legends Bang Bang: A partnership that’s built to win
MOST READ
Leonen impeachment case moves forward in House
Hot, humid weather for PH on Monday — Pagasa
Mischief Reef – where it all started
Woman believed to be dead wakes up minutes before her cremation
Don't miss out on the latest news and information.