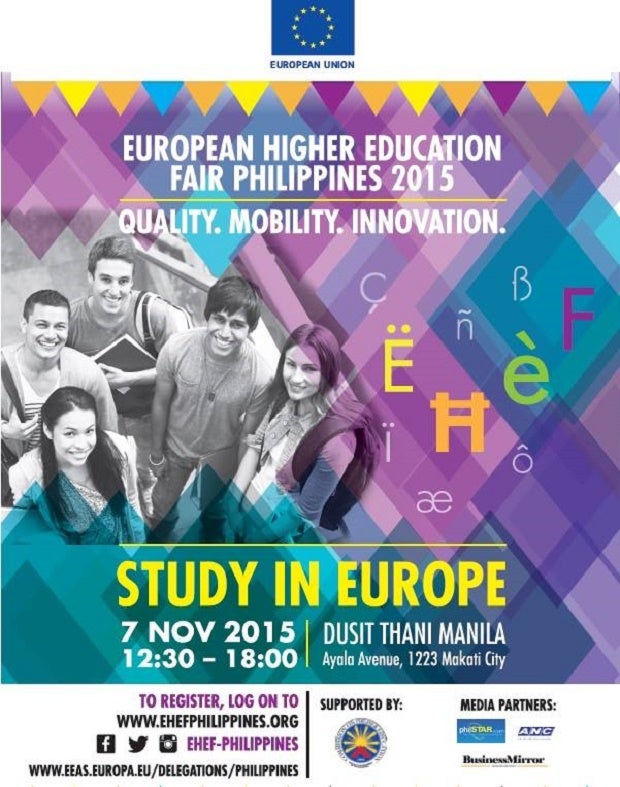 PHOTO FROM EUROPEAN UNION IN THE PHILIPPINES’ FACEBOOK PAGE

The Delegation of the European Union (EU) to the Philippines will hold the European Higher Education Fair (EHEF) 2015 in the hopes of inviting Filipino students to go to Europe and pursue undergraduate, graduate and post-graduate studies there.

During the press launch of the EHEF 2015 on Thursday, EU Delegation to the Philippines Chargé d’Affaires Mattias Lentz said that the fair, which will feature 27 European higher educational institutions from 12 EU states, will greatly benefit Filipino students who want to study in Europe as they will get direct and immediate response to their queries.

“(The EHEF’s goal) is to give Filipinos students the opportunity to learn more about European universities and get immediate and direct answers from the representatives of the higher educational institutions [who] will be present in the fair,” Lentz said.

The EU official said that through launching initiatives concerning education, it will erase any “cultural divide” which may exist between the EU and the Philippines.

“Education is a two-way street. And only through people-to-people links can we bridge any cultural divide and achieve better awareness, understanding and appreciation between and among our countries,” he added.

The fair, which is now on its fourth edition, seeks to promote the EU as the “center of quality and excellence in higher education” in the world.

The schools that will participate in the said fair will come from Belgium, Hungary, Czech Republic, Ireland, UK, Spain, Denmark, France, Germany, Italy, The Netherlands, and Sweden.

“With this fair, we want to underscore our goal to promote and introduce the EU as center of quality and excellence in higher education and developing mobility and people-to-people links between the EU and the Philippines. This is part of the larger effort of increasing our ties within the whole region,” Lintz said.

“We are sure that many Filipino students benefit from coming to the fair,” he added.

The fair will be held at the Dusit Thani Hotel on November 7 from 12:30 p.m. to 6 p.m. Admission is free and those interested can register at www.ehefphilippines.org or just walk in at the venue. CDG