Being a Filipino American in the Republican Party 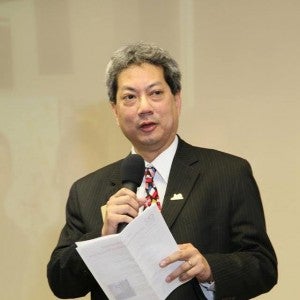 Dr. Jose Rizal, a national hero of the Philippines, placed a high value on civic involvement wherever he was, whether it be the Philippines or traveling around the world.  He wanted the Philippines to be more involved in shaping its destiny and wanted the people to have more control of their government – ideals similar to those of the Republican Party.  As we celebrate Filipino American History Month, I reflect on my Filipino heritage and the values I share with the Republican Party and Rizal’s words from the 19th century, which still ring true today.

I was born and raised in northeastern Ohio as the son of two Filipino immigrants who came to America in the 1960’s in search of the American dream.  My parents taught me the importance of God, family, hard work and self-reliance.  Growing up during the Reagan Revolution, I found a home in the Republican Party because I realized that the values my parents taught me were also the bedrock principles of the party. Ever since I attended my first political gathering, this Party has always made me feel welcomed, accepted, and included.  Over my lifetime, I have worked with three different Republican Party County organizations in two different states, but no matter where I go, my friends from the Party are more like my family. The Grand Old Party (GOP) has always encouraged me to be involved in the political process because we share the same common principles. The GOP continues to stand for a strong national defense, lower taxes, religious values, and of course, smaller government.

As the mayor of Brunswick, Ohio, a town of approximately 35,000 people, I am proud of my heritage.  My wife was born and raised in the Philippines.  We raise our two teenage kids with the same values that have been taught to us.   We work hard, go to church, and contribute back to our community.  These values are not only Filipino values or Republican values, but more importantly they are also American values.  Even though we speak Tagalog at home and eat Filipino food, we are Americans first, and we celebrate these core principles that are shared across cultures, across traditions and in my Party.

Recently, Republican National Committee (RNC) Chairman Reince Priebus spoke on the importance of the role that Filipino Americans play in our society as well as the great contributions they have made to our country.  The RNC continues to engage and build meaningful relationships with Filipino communities across the country, and encourage them to get involved in our political process as we continue to build upon the American dream.

I believe that Dr. Rizal’s words and actions of greater civic engagement have a direct impact on how our communities move forward and thrive.  Recently, I addressed the National Federation of Filipino American Associations (NaFFAA Region 3 East) and talked about furthering our community’s political involvement.  At the Knights of Rizal International Conference last year in Greater Cleveland, I spoke about leadership and how it affects our Filipino communities here in America.  There is a need for greater participation of the Filipino American community in the political life of our cities, townships, states, and even our federal government in Washington.  The GOP can help us get there.

As we celebrate Filipino American History Month this October, I ask all of you to be open to the message of the GOP.  As Americans of Filipino descent, we share similar beliefs and values, and we want a better tomorrow for our children.  The GOP is an inclusive party made up of many different kinds of people with diverse backgrounds and is the best vehicle for turning our country in the right direction.  It is my home – and it can be yours too.  I ask all of you to join our Party and help us to restore the American dream.

Ron Falconi began his term as Mayor of Brunswick, Ohio, in 2014.  Originally, he was appointed to the Council at Large seat in 2008 among a group of 14 applicants.  He successfully defended the seat and won a full term in 2009.