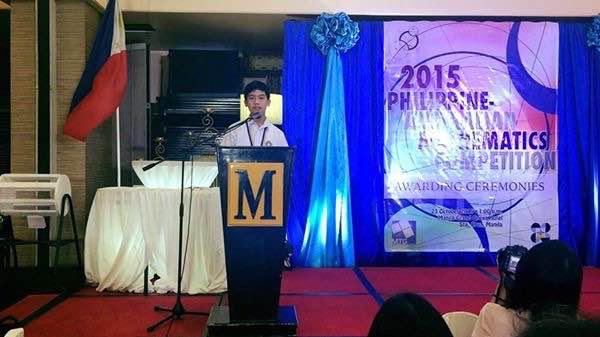 This was announced yesterday by professor Mike Clapper, executive director of the University of Canberra-based annual international contest, during the AMC award rites at a Manila hotel.

Gonzales, 13, was one of only 42 students around the globe who scored 100 percent in this year’s AMC, held simultaneously on Aug. 4 in 41 countries, including the Philippines.

The other perfect scorers were from Australia, China, Taiwan, Bulgaria, Singapore, Malaysia and Indonesia, among others, Clapper told the Inquirer.

For his feat, Gonzales, who is a Grade 8 student, won an AMC medal and a Peter O’Halloran Certificate.

Three other Filipino students were among the Top 0.02 percent of contestants, including some 4,000 from the Philippines. They were Kyle Patrick Dulay, Vince Jan Torres and Farrell Eldrian Wu from Philippine Science High School (Quezon City), Sta. Rosa Science and Technology High School in Sta. Rosa, Laguna, and MGC New Life Christian Academy in Taguig City, respectively. They each received AMC medals.

Eighty-three other students received Certificates of High Distinction being in the Top 2 percent of the examinees.