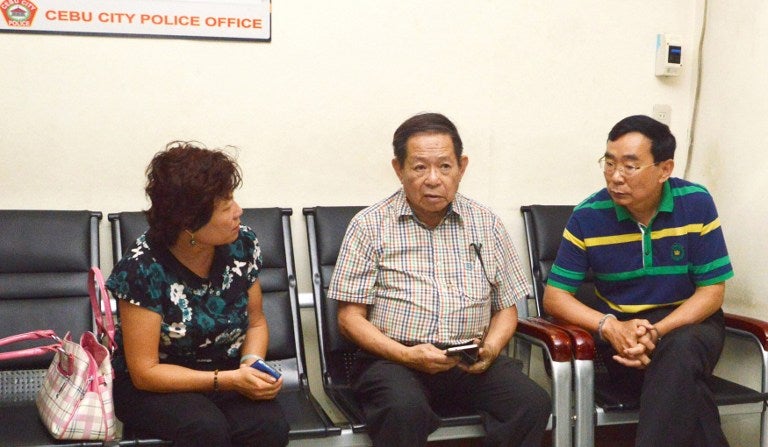 Two Chinese nationals, a consular officer (L) and her husband (R, with handcuffs), suspects in the shooting of Chinese consul general Song Ronghua at a restaurant, talk to an interpreter (C) at a police station in Cebu City, central Philippines on October 21, 2015. China’s consul general in the Philippines’ second biggest city was wounded and two of his staff members were killed on October 21 during a lunchtime gun attack at a restaurant, police said. AFP FILE PHOTO

MANILA, Philippines—Two Chinese diplomats have been flown to China to stand trial for a gun attack in the Philippines that killed two of their colleagues and wounded another, Philippine authorities said Saturday.

China’s consul general in the central city of Cebu survived after being shot in the neck, but two of his staff members died during the lunchtime attack at a restaurant on Wednesday.

“Yes, they will be prosecuted in China,” he added.

READ: PH to yield 2 diplomats in Cebu killings to China

The motive of the gun attack was not known, and the positions held by the two suspects at the consulate remained unclear.

China has the death penalty, while the Philippines does not.

The Chinese foreign ministry has given little information about the attack.

Chinese embassy spokeswoman Li Lingxiao told AFP she had no comment to make on the Filipino government’s announcement over the transfer of custody.

Staff at the upmarket Cebu restaurant earlier said the victims and suspects were among nine Chinese diners who had gathered to celebrate the birthday of the consul general, Song Ronghua.

The Chinese embassy in Manila later described the couple as accredited Chinese diplomats and invoked diplomatic immunity, Jose has said.

READ: When does diplomatic immunity end?

“I was informed they have already been flown out to China,” Banas added. IDL