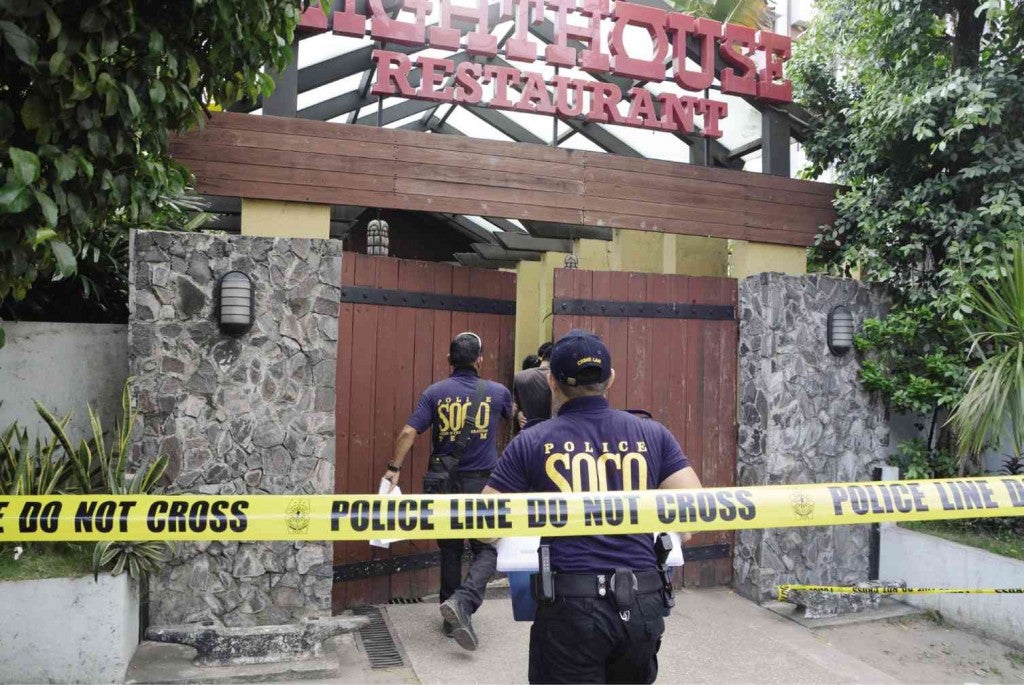 CEBU CITY, Philippines—There was apparently a change of plans.

The Chinese couple implicated in the killing of two diplomats and the wounding of another inside a restaurant in Cebu City were whisked out of the police regional headquarters to the airport in Lapu-Lapu City where they were to take a plane to Manila on Friday night.

At least 20 policemen on board six vehicles pulled out from Camp Sergio Osmeña, headquarters of the Police Regional Office 7 (PRO-7) in Central Visayas, on Osmeña Boulevard here at about 6:30 p.m.

Consul Gou Jing, 57, and her husband, Li Qingliang, 60, were inside a black van with tinted windows. The van was between two police patrol cars.

The convoy was escorted by two speed cops and Special Weapons and Tactics (SWAT) policemen who were in a Toyota Vios. Chief Supt. Prudencio “Tom” Bañas, police director for Central Visayas, was onboard a sports utility vehicle, which was part of the convoy.

Department of Foreign Affairs (DFA) and Chinese Embassy representatives were in another vehicle.

Reached through his mobile phone, Bañas confirmed that he and his team were on their way to Mactan Cebu International Airport where Li and Gou were to take a plane bound for Manila, and then turned over to the Chinese Embassy.

But he declined to say if they were to take a commercial flight or a private plane and what time they were supposed to take off from Cebu for security reasons. There were reports that the suspects were accompanied by the Chinese ambassador to the Philippines but this could not be confirmed.

In an interview with radio station dyAB, Bañas said the “process has already been completed by the DFA and China and the two are now ready for the turnover.”

A source from Cebu City Hall earlier said a top Chinese official arrived in Cebu City on Friday to help facilitate the processing of the papers for the departure of Gou and Li.

The same source said 25 security personnel were expected to arrive on Saturday to escort the suspects as well as to bring the two bodies back to China.

Estee Plunket of Mactan Cebu International Airport in Lapu-Lapu said that as of 5 p.m., there were no arrangements yet on the departure of the Chinese couple.

Police officials remained tight-lipped on details of the departure.

“I don’t really know. The DFA is talking with the Chinese Embassy,” Bañas said when asked about the couple’s departure.

He declined to confirm the arrival of the 25 security personnel, saying he and other police officials were meeting with the DFA and Chinese Embassy representatives.

As of 5 p.m. on Friday, the closed-door conference was still in progress inside Bañas’ office in PRO-7.

In preparation for their departure, Gou and Li were transferred to Camp Sergio Osmeña from Camp Sotero Cabahug, headquarters of the Cebu City Police Office (CCPO), where they had been held since the shooting on Wednesday.

Gou and Li boarded separate vehicles from the CCPO on Gorordo Avenue to Camp Sergio Osmeña, a distance of about 3 kilometers.

Gou was the first to leave the CCPO at 1 p.m. Her head was covered with a jacket while she was escorted by a female officer when she boarded a van owned by the city government.

Li, who also had his head covered with a jacket and escorted by policemen in civilian clothes, rode in a police car.

The convoy of at least four vehicles and two motorcycles left CCPO at about 1 p.m. and made it to PRO-7 headquarters in about 10 minutes.

Two motorcycle-riding SWAT personnel led the convoy. The van and the police car carrying by Gou and Li were in the middle of the convoy.

Bañas confirmed that the two suspects were already in his office but declined to say if this was in preparation for their departure on Saturday.

Both suspects were still wearing the same clothes they wore when they were taken into police custody on Wednesday shortly after the shooting in a private room at Lighthouse Restaurant on General Maxilom Avenue in Cebu City.

But the couple will not be prosecuted under Philippine laws after they invoked immunity from prosecution as diplomats. Instead, they will be deported to China.

The DFA confirmed that the two were accredited diplomats and covered by diplomatic immunity under the United Nations’ Vienna Convention.

A consular agreement between the People’s Republic of China and the Republic of the Philippines also grants immunity to consular officers from the judicial or administrative jurisdiction of the receiving state, except in civil proceedings.

Meanwhile, Bañas confirmed that the .45-cal. pistol allegedly used by Li had the same serial number as another .45-cal. pistol that had been surrendered to the firearms and explosives unit of the police by the owner.

He said it meant that Li used an unlicensed firearm.

Bañas, however, said it has yet to be determined how Li was able to acquire the gun.

Chinese couple in Cebu shooting on the way to Mactan airport

Gun in Cebu City shooting has duplicate in Valenzuela City