‘One Kapamilya Go’ to take over Oakland’s Oracle Arena 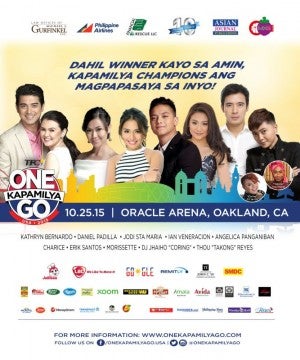 OAKLAND, California–A Filipino company on Sunday, October 25 will bring an all-Filipino cast for one of the most anticipated Filipino events in the U.S. this year: the concert festival, “One Kapamilya Go 2015 sa Oracle Arena.”

The concert festival will be held at Oracle Arena in Oakland, home of 2015 NBA Champions Golden State Warriors, the largest NBA arena in California and a premier entertainment venue that has hosted performing artists like U2, Madonna, Janet Jackson, Justin Bieber, One Direction and Katy Perry.

Joining them are supporting castmates who have caught viewer attention for their comic skills: Thou “Takong”Reyes and DJ Jhaiho “Coring.”  The “TFC Live Experience” of the teleserye, “Pangako Sa Yo,” is also layered with a “Galing ng Filipino” showcase featuring musical icons Charice, Morissette and Erik Santos.

For One Kapamilya Go this year, TFC North America made sure that this is not the usual concert and festival with booth activities, games and prizes.  All those elements are present, but there is so much more.

My Inamorata contest
Ladies are encouraged to come in their most elegant Amor Powers attire. Ten will be called on stage and one of the 10 will be chosen by Amor de Jesus-Powers (Jodi Sta Maria) and Claudia Zalameda Buenavista (Angelica Panganiban) as recipient of the Inamorata necklace. This lucky winner will also be serenaded by Eduardo Buenavista (Ian Veneracion) himself. It’s a live experience, and the contestants will feel like they’re part of the cast.

King Teen Fan
Some of those who posted their fan photos on social media with heartthrob Daniel Padilla with the hashtag #DanielRocksOKGo have been selected and will be featured on a video wall during his performance atOne Kapamilya Go.

Launch of TFC Live App in the U.S.
One of the most anticipated activities at the event is the launch of theTFC Live App in the U.S.  Using one’s mobile phone, tablet or laptop,One Kapamilya Go attendees can go to kapamilya.com/tfclive, click the Event and check out the Event Splash Page, continue then log in or create an account.  Once registered and validated, the attendees will have access to coupons below.

myRemit and StarKargo
The first 100 attendees to present a digital coupon at the TFC Padala Booth and receive a special gift bag.

Pangako Sa ‘Yo
Attendees can present this coupon and avail of the free photo op that captures the fun and colorful ambience of Casa Corazon at the Pangako Sa ‘Yo booth.

TFC.tv
This digital coupon can be presented for the chance to win a free exclusive mobile gadget from TFC.tv at its booth.

ABS-CBN Sports + Action
Booth visitors can get coupons that grant them access to a photo opportunity with the Golden State Warriors’ 2015 NBA Championship trophy with the Warrior girls from 4 p.m.-5 p.m.

[email protected]
This digital coupon can be presented for a 30-percent discount on the romantic novel turned Star Cinema movie, “One More Chance.”

The Cast Party
Those who registered at http://www.kapamilya.com/tfclive from October 19-25 automatically gets a raffle entry. A winner will be drawn on October 25 during the pre-show.  The winner can bring 4 friends to attend the Cast Party of One Kapamilya Go.

For more information on One Kapamilya Go sa Oracle Arena and how to purchase tickets, visit http://www.tfc-usa.com/okgo/