Not simply the Asian guy in CW’s ‘Crazy Ex-Girlfriend’ 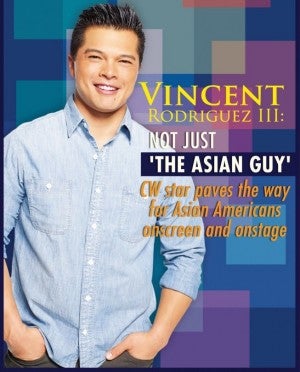 “You do crazy things when you’re in love.”

At least that’s what Filipino American actor Vincent Rodriguez III believes: that love is an all-consuming and powerful thing–especially when you absolutely love what you do, it can make you crazy.

“I walked into my first day of acting school and the teacher asked us, ‘Is this what will give you life? Is this the part you want to play in society?’ And then I asked myself, ‘What else could I possibly be doing?’ From then on, I knew exactly what I always wanted,” he said.

“If you want something badly enough in life, you work hard to go get it. It’s not an easy path–it is arguably the hardest journey you will ever have. But in the end, it’s worth it.”

Finding home in the theater

Rodriguez was born in San Francisco, California, and grew up in what he calls the “Second Philippines of the World”: south suburban Daly City. He is the youngest and only boy of four, with three older sisters all born in Manila.

“I was the bunso,” Rodriguez told the Asian Journal. “My sisters are all smart, musically talented, and into theater. I [had] really powerful role models growing up.”

Motivated by a desire to try and learn new things, at a young age Rodriguez was involved in track and field, taekwondo, and martial arts. Later he became very active in his high school’s drama department, where he quickly found his love for musical theater.

After graduating from high school and a year in junior college, Rodriguez enrolled at the Pacific Conservatory of Performing Arts (PCPA) in Santa Maria, California, and began to pursue acting as more than a hobby, but a full-time career.

“My family was always supportive of me, but it was not an easy journey,” he said. “My dad didn’t always think I could make this [acting] into a viable career. When it came to showbiz-ness, he wanted me to be a businessman.”

“But that initial resilience pushed me to be a harder worker, and has made me even more passionate about what I do.”

After finishing musical training in acting, voice, and dance, Rodriguez ventured to Los Angeles for his first successful audition, becoming a member of the ensemble (and later principal understudy) in the first national tour of “42nd Street.”

“It was my first professional role,” he recalled. “I really put my whole self into it, and I began to relish in the joy of being an entertainer.”

Pursuing his dreams in the theater, Rodriguez moved to New York City to audition for numerous acting, singing, and dancing roles. He eventually joined the companies of “Thoroughly Modern Millie,” “Xanadu,” “Honor,” “Pipe Dream,” as well as the original cast of Irving Berlin’s “White Christmas” in Toronto and Boston.

“Half of my career was in the ensemble, and then the other half I played feature parts, joined national tours and other New York productions, and was asked to sing on cast recordings,” Rodriguez said.

Most recently, he joined the 1st national tour of “Anything Goes,” appeared on CBS’ “Hostages,” and workshopped for Richard Maltby Jr. and David Shire’s new musical, “Waterfall.” He also sang ensemble in a cast recording of the stage production of Disney’s “The Hunchback of Notre Dame.”

Wanting to share his life lessons with other aspiring actors, Rodriguez became a teacher back at his alma mater, PCPA.  He taught professional technique, song interpretation, dance workshops, and other aspects of the musical audition process.

“It’s not about making people into professional actors, or to be like me. For me as a mentor, it’s about helping the person to see what their potential is, and to learn how to use the theater as a form of expression, or as a gateway to who they really are,” Rodriguez noted.

The young actor’s extensive background and resume boasts a double black belt in martial arts, CrossFit, stage combat, roller-skating, billiards, and even magic tricks. “A good amount of my previous jobs required special skills [like dancer, comedian, magician], and on TV, they can write these skills into the show,” he said. “The cool thing is that the writers know my special skills are things I’ve learned to do growing up. I knew that my interests would help color my career as an actor.”

One of Vincent’s most recent, favored theatrical roles was in the 2014 off-Broadway revival of David Byrne and Fatboy Slim’s “Here Lies Love,” a disco-rock musical about the life of Filipino former First Lady Imelda Marcos.

“I met Ruthie Ann Miles, who was playing the lead, and she encouraged me to audition,” he recalled. Along with Miles, Rodriguez understudied other distinguished Fil-Am actors, Jose Llana (Ferdinand Marcos) and Conrad Ricamora (Ninoy Aquino), and played the DJ for a month.

Many of the actors involved with the show–including Santino Fontana, best known as the voice of Hans in Disney’s “Frozen”–have a theater background. In true musical-fashion, the writers have prepared a killer comedic soundtrack with different musical styles and genres, from 1940s Hollywood to 90s R&B.

Rodriguez is excited to use his Broadway theater experience on the TV screen. “Yes, I will be singing,” he said excitedly.

Being Filipino-American and making waves both onstage and onscreen, Rodriguez faced many challenges as an actor.

“The Filipino community is big into entertainment, karaoke, performance culture. At first, pursuing theater and other talents were more like hobbies for me, until I began taking them seriously,” he said. “And my family noticed too; it wasn’t just a hobby anymore.”

When Rodriguez first auditioned for the title role in “Crazy Ex-Girlfriend,” directed by Marc Webb (who initially discovered the actor through his character in “Here Lies Love”), he knew the part was special. Esteemed writers Aline Brosh McKenna (“The Devil Wears Prada”) and Rachel Bloom (from “Robot Chicken” and YouTube’s Rachel Does Stuff) are a part of the project, and it has a primetime spot (Monday nights at 8:00pm) on the CW network.

The show follows Rachel Bloom as Rebecca Bunch, a successful, miserable young woman who impulsively leaves her job as a real estate lawyer in New York in search of love and happiness in West Covina, California–also the suburban hometown of her Filipino ex-boyfriend.

“‘Crazy Ex-Girlfriend’ explores this idea of feeling crazy over someone,” said Rodriguez, adding that the show includes themes of family, friendship, and finding home away from home. “When you’re in love, it’s fun, ridiculous, and exciting.”

“As the show progresses, you learn what makes Rebecca that way–she’s just a normal girl in love. Each of us have been in a place where we’ve been infatuated with someone or the idea of someone, the idea of love, and we’ve all done pretty crazy things because of it.”

“There’s such a crazy parallel between my character, Josh Chan, and who I am as a person,” he admitted. “From Josh’s personality, his family and friends, and how he grew up–it’s kind of scary.”

Josh Chan is basically “a SoCal Asian bro,” Rodriguez described. Coming from a family of mixed parents (Filipino, Chinese, and Spanish, just like Rodriguez), Josh–the one that got away–is also finding his place in reality and romance.

“You’re going to meet Josh Chan, find out that he’s Filipino, and see his family values,” Rodriguez shared.  “The Chan family dynamic is very true to form–it feels very real to my own family.”

“It’s exciting to see Filipino culture being portrayed in the mainstream,” he added.

“I always wanted to be the ASIAN guy”

At the 2014 PaleyFest Fall TV Preview, main actress Rachel Bloom said she wanted the location of “Crazy Ex-Girlfriend” to be in Southern California, based off her own childhood experience living inland.

“We knew we wanted it to be a fish-out-of-water story, but most of those happen in the Midwest or on the East Coast,” Bloom said this month in an interview with Vulture, adding that she and McKenna were drawn to the number of chain businesses and cultural diversity that San Gabriel Valley is known for. “We also liked how multicultural Southern California was, which is…what new suburbia is, and will continue to grow and be—people from all different cultures going to the same Applebee’s.”

Since the show is set in a suburb notorious for Asian American (and especially Filipino) families, the writers were careful to make sure actors accurately represented the culture and diversity of West Covina.

“We always wanted the male lead to be Asian,” Bloom shared, “because I grew up with Asian bros, and I hadn’t seen that represented on TV.”

Rodriguez is proud to be among a growing number of Asian American series regulars on fall TV. “It’s an honor,” he remarked. “It means that we’ve evolved, that we’re at a new place when it comes to television. It’s breaking ground.”

“You know how there’s always ‘the Black guy,’ or ‘the Mexican guy?’ I always wanted to be the ASIAN guy, the mirror of society,” Rodriguez said.

“As a Filipino actor, I always wanted to be a part of the growth of Asian-American representation on TV and onstage. Now I feel like I’m a part of that journey to exposing modern, cultural America.”

He added, “I’m hoping that my presence in this show will open up the minds of the Filipino community, especially young Filipino men.”

Rodriguez also applauded shows that put Asian-Americans in the forefront, such as ABC’s “Fresh Off the Boat,” which successfully portrays both the stereotypes and the injustices experienced by the minority community in a fresh, comedic way.

Extremes with all ethnicities

“There are always extremes that exist with all ethnicities, and it’s nice to be a part of a show that explores these identities, and portrays who we really are: people with a specific background and a place,” he said, regarding comedies [like “Fresh Off the Boat” and “Crazy Ex-Girlfriend”] that put Asian-Americans in starring roles.

“We’re showing the world our reality–sometimes, that can be painful and uncomfortable. But it can also be funny.”

To aspiring actors, musicians, dancers, and entertainers of every color, Rodriguez offers a simple piece of advice that is reflected throughout his new show: be who you are.

“Be open to yourself, to new experiences, to your interests, and never let anyone tell you, you can’t do something. As an actor, you get to create who you want to be, and become who you really are. Be kind to yourself, strive to be the best in whatever you choose to do. Love your life, and live it joyfully, fully, and authentically.”