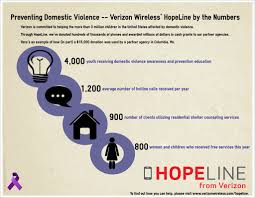 With every online or in-store purchase of exclusive purple accessories, like a headset, phone or tablet case, HopeLine® from Verizon will donate $1, up to $100,000 to the national hotline.

HopeLine is also trying to reach its goal of one million phone donations by the end of 2015. Consumers are encouraged drop off wireless phones, chargers and accessories, from any carrier, at a Verizon store to help support victims and survivors of domestic violence.

Domestic violence is an issue rarely talked about in Asian American communities, but unfortunately it’s very prevalent: 41 – 61% of Asian women report experiencing physical and/or sexual violence by an intimate partner during their lifetime.

This is higher than the rates in a national study reported by all other races. “Going purple,” the color of Domestic Violence Awareness, is also a way of generating awareness of this serious problem.

To show  support, sharing this announcement on your social media channels. Suggested Tweet: In the effort to end domestic violence, go purple to show your support. @verizon @hopelineverizon http://vz.to/1vNkopE