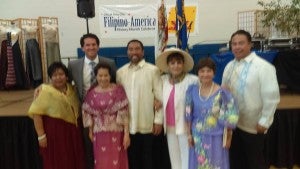 DALY CITY, California—Filipinos make up a third of this city’s population, and they made their presence felt recently with a daylong celebration of the annual Filipino-American History month at the Pacelli Event Center.

Fil-Am Daly City Mayor Ray Buenaventura welcomed guests and dignitaries from all over the Bay Area who wanted to take part in honoring Filipino culture, customs and tradition. The event was held in collaboration with the Pilipino Bayanihan Resource Center.

“Come by to learn more about the Filipino culture!” Buenaventura said. “We have food trucks to give you a taste of the Philippines! We have business vendors and non-profits wanting to share information, their talents and services with you! We have live performances to get you out of your seat! We have a variety of performances from traditional folk dancing to American influenced,” Buenaventura pushed.

Among the guests was San Francisco Consul-General Henry Bensurto Jr. who hailed Daly City’s continuing tradition of holding festivities in observance of the Fil-Am History Month.

In his remarks, Bensurto regards Daly City as a partner in giving residents who have not or have rarely gone to the Philippines a taste of what it is like in the Philippines and what it has to offer.

Bensurto also took the occasion to announce that the White House Initiative on Asian Americans and Pacific Islanders (WHAAPI) celebrated Fil-Am History Month at the White House for the first time, recognizing the contributions of the second largest Asian group in the United States.

“What an honor it is to be recognized during our generation. I believe it took several years before Fil-Am History Month would be recognized and acted upon by state and national legislatures,” Bensurto exclaimed.

He added, “By examining our value system, we are better able to engage and assimilate into mainstream society. I encourage you to seek these events that celebrate our culture and heritage.  See what a talented, creative and generous people we are, how varied and colorful our history and culture are, and boldly declare, ‘Filipino ako, proud ako!’” 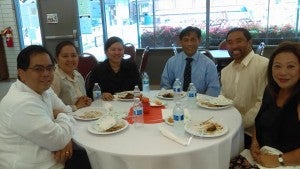 Also present was Supervisor Jane Kim who represented the city and county of San Francisco to greet Daly City on the occasion.

“Happy Filipino American History Month! It is my honor to represent such a strong and large community that is shaping San Francisco and our leadership administering so much to enhance our community whether for schools, youth programs, or businesses,” Kim shared.

Vice Mayor Jim Navarro was invited by close friends and fraternity brothers from the Kappa Epsilon organization to come all the way from Union City to join the revelries in Daly City. 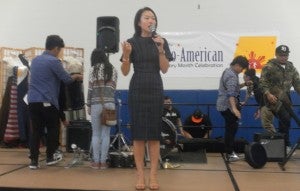 I find the commemoration very invigorating and educational.  I realized that there are many Filipino organizations in the bay area that are working for the betterment of the Filipino community.  I was very proud that I was a part of the celebration,” Navarro said.

Union City Council issued a proclamation in honor and recognition of October 2015, as Filipino American History Month. Navarro disclosed that his city may be able to hold its own celebration by next year.

Buenaventura observed that the turnout this year was much larger than last year as the event continues to grow bigger.  He thanked the Pilipino Bayanihan Resource Center for its organizing efforts.