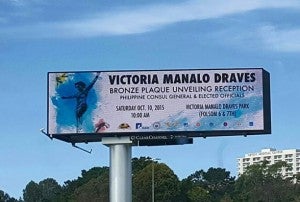 SAN FRANCISCO – The largest digital billboard in the San Francisco Bay Area, located in Daly City’s Serramonte Mall, beckoned everyone entering San Francisco through Highway 280 to troop to the Bronze Plaque Unveiling Reception on October 10 to honor Victoria Manalo Draves in the park named after her, the only park named after a Pinay in the U.S.

At the unveiling ceremony, Phil Ginsburg, the Recreation & Parks General Manager of San Francisco, gushed about why the park was named after her.“Ms. Draves is an idol for young boys and girls everywhere, she changed diving forever,” he said. “We’re proud to be able to tell her story in the park named for her.”

Victoria Manalo Draves, or Vicki as she liked to be called, made history as the first American woman to win two gold medals for diving and as the first, and still only Filipino, to win an Olympic gold medal and she won two of them in springboard and platform diving at the 1948 Olympics in London.

If she had represented the Philippines when she won her two gold medals, there would have been parks and schools named after her, and monuments of her erected all over the Philippines to celebrate her inspiring victory. 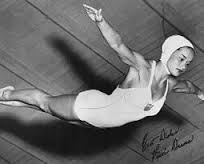 In fact, the Bay Area Sports Hall of Fame (BASHOF) has steadfastly refused to include her in its exclusive club of local San Francisco sports heroes like Joe Montana and Willie Mays. When Vicki died from heart and cancer complications in her home in Palm Springs, California on April 11, 2010, news of her death did not even appear in the local newspaper until almost two weeks later.

My proudest moment in my 18 years as a publicly elected member of the San Francisco Community College Board came during my third term as Board President in 2005 when I was able to influence the selection of Victoria Manalo Draves as the 2005 Most Outstanding Alumnus of City College of San Francisco. 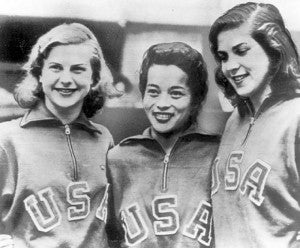 When Vicki received her award and spoke at the Commencement Ceremonies of City College at the Masonic Auditorium on May 27, 2005, she received a resounding ovation from an audience mesmerized by seeing footage of her Olympic diving.
https://www.youtube.com/watch?v=uVdk6-fXOlI

For the graduation ceremonies, City College paid the plane fare and hotel expenses of Vicki and her husband, Lyle, as they enjoyed the adulation of her native city 57 years after her Olympic achievement. In that memorable 2005 visit, Vicki visited the two acre park that would be named after her. Whil strolling the park, she recalled attending the school that used to be at the site then called the Franklin Elementary School, which was located just four blocks from where she was born and raised.

Victoria Taylor Manalo was born in the South-of-Market (SOMA) district of San Francisco on December 31, 1924 to a Filipino father, Teofilo Manalo who was a musician and a chef, and an English mother, GertrudeTaylor, who came to San Francisco to visit a sister who had married a Filipino. Soon after her arrival in 1923, she met Teofilo and married him a year later. When Vicki was born, her parents must have had a premonition of her Olympic future because she was already a Manalo, and she was still named Victoria. Win win. 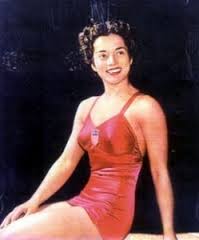 Vicki’s parents were able to marry in San Francisco even though there was a California law enacted in 1850 prohibiting “all marriages of white persons with negroes or mulattos” and its 1880 amendment including “Mongolians” because Courts held that the law did not apply to Filipinos who were considered “Malays” (Roldan vs. Los Angeles County). In 1932, however, the California Legislature amended the law to include “members of the Malay race”.

“Intermarriage was frowned upon in those days,” Vicki recalled as she described what happened to her aunt who was married to a Filipino. Her aunt was repeatedly harassed and bullied by the white workers and supervisors at the St. Francis Hotel where she worked. They pressured her to divorce her husband. After she refused to do so, Vicki sadly recounted, her aunt’s body was found at the bottom of the hotel’s elevator shaft due to an “accident”, the police said. Vicki believed otherwise.

Vicki grew up without relatives, just her parents, a twin sister, Connie, an older sister, Frankie, and a younger brother, Sonny, who died as a child. “I wanted to be a ballet dancer,” Vicki recalled. “But we were just a very poor family, and there was no opportunity to extend on those desires.”

DIVING INTO THE SPORT

“I didn’t learn to swim until I was 9 or 10,” Vicki said. “I was really kind of afraid of the water. We learned to swim going to what they called the nickel baths in the Mission District. You paid five cents admission and we would go there each summer. We would go there first thing in the morning, and then the Red Cross gave some lessons, and we would participate in that. I tried some dives off the diving board and off the side. I did not start diving until I was 16.”

About a year later, a friend who was impressed with her diving skills introduced her to Phil Patterson, swimming coach of the Fairmont Hotel Swimming and Diving Club. After they met, Patterson told her bluntly that because she was Filipino, he could not accept her as a member of his Club. But if she changed her last name to her mother’s surname “Taylor”, perhaps he could bring her in as a member of his Patterson School.

Vicki asked her parents’ permission to change her name to Vicki Taylor and her mother agreed. “I don’t know how my dad felt,” she said, “because he never said anything.”

After “Vicki Taylor” started diving regularly at the Fairmont, she was interviewed by a local paper: “I remember the first time I was interviewed for anything, they asked my name and I replied instinctively, “Victoria Manalo.” I received a chewing out from Phil Patterson,” she said.

How did Patterson teach her how to dive? “One evening, he told me to follow another diver. That is really how I learned to dive.”

Vicki relentlessly practiced her diving after school hours when she was still a student at Commerce High School on Van Ness Avenue and continued to do so when she enrolled at San Francisco Junior College now City College of San Francisco.

When war broke out in 1941, Patterson went into military service and the Fairmont Hotel swimming pool closed down, forcing Vicki to stop diving for a year. In that time, she found a job working at the Presidio military base. Later, after Vicki learned about a swimming program at the Crystal Plunge with Charlie Sava as the coach, she talked to Charlie about coaching her and he agreed and assigned Jimmy Hughes to be her coach.

Hughes coached Vicki to her first national AAU diving competition at the Indiana national meet in 1943 when she was 19. Vicki came in third behind Helen Rose and Zoe Ann Olsen on the 3-meter board.

The next national AAU diving competition was held in 1944 at the Athens Athletic Club in Oakland where Zoe Ann Olsen trained with her coach, Lyle Draves. “That is where I first saw Lyle,” she recalls. Because her coach, Jimmy Hughes, could not advance her to the next level, she asked Lyle Draves to be her coach and he agreed.

Under Lyle’s guidance, Vicki learned platform diving to add to her springboard diving repertoire. She was now ready to compete in a diving competition that was to be held at the Fairmont Hotel Swimming and Diving Club where she used to practice her diving years before when she was “Vicki Taylor”. But as Vicki Manalo, she was barred from entering the competition.

In disgust at the Fairmont’s racism, Lyle Draves left the San Francisco Bay Area for Los Angeles. Vicki followed him and married him there on July 12, 1946. Under Lyle’s tutelage in Los Angeles, Vicki went on to win the1946, 1947, and 1948 US National Diving Championships in platform diving and in springboard diving.

In the 1948 Olympics in London, Victoria Manalo Draves made history by winning gold medals in both the platform and springboard diving events. Lyle’s other student, Zoe Ann Olsen, placed second in springboard diving.

After her Olympic victory, Vicki visited the Philippines for the first time and brought Lyle with her. She gave platform diving exhibitions at the Rizal Stadium and in other Philippine venues.

In 1949, she appeared in a LIFE magazine layout that drew a wide fan base. Through the late 1940s and 1950s, Vicki toured around the world in water performance shows with celebrities such as Buster “Flash Gordon” Crabbe and Larry Crosby.

After performing regularly at the El Mirador Hotel in Palm Springs and at the Shadow Mountain Resort & Club in Palm Desert, Vicky retired from diving to have children. Starting in the early 1950s, Vicky and Lyle would raise four sons — David, Jeffery, Dale and Kim — all skilled divers.

“My mom always smiled. She always brightened your day. That was my mom even raising four boys, and we were a handful,” David Draves told the Desert Sun. 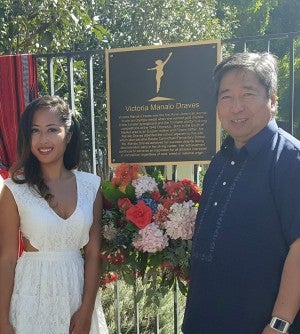 Georgina Tolentino, who is the producer and star of the forthcoming biopic of Vicki Draves, and Rodel Rodis.

Vicki was inducted in to the International Swimming Hall of Fame in Ft. Lauderdale, Florida on December 22, 1969.

But she has still been shut out of the Bay Area Sports Hall of Fame (BASHOF) which was created by the San Francisco Chamber of Commerce in 1979 and which has inducted 155 Bay Area sports athletes including 5 for 2015 (Barry Bonds, Dusty Baker, Roger Maltbie, Jonny Moseley and Franklin Mieuli).

Perhaps BASHOF will change its mind after the “Manalo” film biopic of Vicki Manalo Draves, starring writer-producer-actress Georgina Tolentino, is released in 2016.