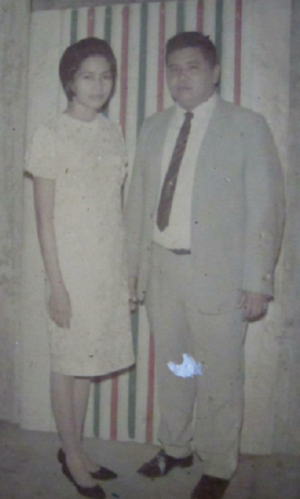 It all started with hushed tones and repressed messages in our household. There were furtive glances down the street; even the blaring radio stopped. Even as an 8-year-old I could feel that something was wrong.  The silence was shattered by loud knocks on the front door, and then soldiers started walking into our home with their Armalites drawn ready to fire.

I could only see their muddy boots treading on our shiny wood floor. They went from room to room; I could hear noise from overturned beds and cushions being ripped apart. Then I saw one soldier cut open our new green living room set. Books were scattered carelessly from the bookcases, and drawers were opened, their contents thrown on the floor. Then one soldier with a lot of patches on his shoulder yelled and called everyone, he asked Mama where Papa was; she answered with a strong voice that she didn’t know.

I was standing beside my oldest sister and I could hear my heart pounding so loud in my head. I could smell gun powder, mud, sweat, fear and most of all danger. I was so scared for our lives and tried to stifle my tears, but they kept on pouring from my eyes, non-stop and soundless; they just kept on flowing until my shirt was soaked and I was too scared to either move or wipe them with my hands. 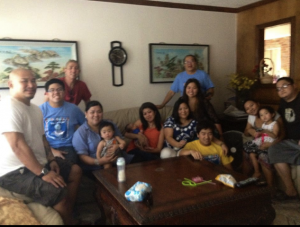 JENNIFER CHENG seated (in dotted blouse) with her family in Southern California.

Then, I remember we rode a jeepney for so long I lost track of time. I woke up on a farm; it was the house of one of the tenants who graciously shared their two-bedroom home with us. Mama slept on the bed with my two younger sisters while my oldest sister and I slept on the bamboo floor with my two older brothers sleeping closest to the bedroom door.

I could hear unfamiliar noises at night, insects chirping, pigs grunting and dogs barking incessantly. Mama told us to very quiet and just try to sleep. In the morning I lost one of my rubber slippers, but I never complained and tried to stand on one foot alternately until one of our house help noticed and let me use hers; she walked barefoot.

Then, Mama told us that Papa, Antonio Suzara, was arrested for bad-mouthing President Ferdinand Marcos during a rally, so they charged him with “sedition and unauthorized possession of guns,” and he would be detained at the Philippine Constabulary Camp.  He was a known supporter of Senator Benigno Aquino at that time. Papa was the administrative assistant to the Mayor in Jose Panganiban, Camarines Norte, when Martial Law was imposed.

I never saw our house again. We had to move closer to the camp in a place without electricity and running water. We were informed that we were being watched and so we should be very careful what to say.

After a year, a military jeep stopped in front of the farm, and I saw Papa walking towards Lolo (my grandfather), escorted by two soldiers. He was carrying a plastic bag. His was head bowed and his eyes were dull and he looked broken.  Lolo just stood there and then signed some documents from the soldiers and shook their hands. Lolo’s eyes were tender and sad; his posture looked like he was carrying a lot of Papa’s burden. They both stood there for a while until Lolo told Papa to rest for now. Papa was never the same, he never talked about what happened in jail nor did he mention it again. 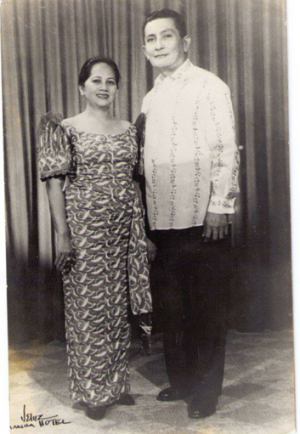 AUTHOR’S GRANDPARENTS:  Former Camarines Norte Governor Fernando Suzara and his wife Sofia Soriano Suzara, at a Governors’ Ball.  Sofia is the granddaughter of Gen. Vicente Lukban, one of the heroes of the Philippines-U.S. War of 1901.  CONTRIBUTED PHOTO

I write this narrative with the permission of my siblings, who agreed to share our story with our countrymen because of the recent campaign from the Marcos’ camp that the atrocities of Martial Law, declared on September 21, 1972, did not happen.

There are countless articles of propaganda that brainwash the youth and attempt to rewrite history, and from a teacher’s perspective, I know this has to stop. It is important that those of us who were directly affected write and tell the truth.

True, it is not fair to judge the son with the crimes of the father, however, it is a miscarriage of justice to let the truth be covered by lies and falsehood.

It is the intent of my article to challenge the Marcoses to show remorse by not changing facts and, more importantly, to return the money that legitimately belongs to the Filipino people. If Senator Bong Bong Marcos can do all of these, then he will be ready to be separated from the legacy of his father; but until then NEVER AGAIN.

Jennifer Suzara-Cheng teaches honors and AP biology courses at a nationally renowned environmental high school in Southern California. She was recently invited by the White House, among 200 outstanding teachers, students, scientists and philanthropists, to participate in its national Back-to-School Climate Education event.