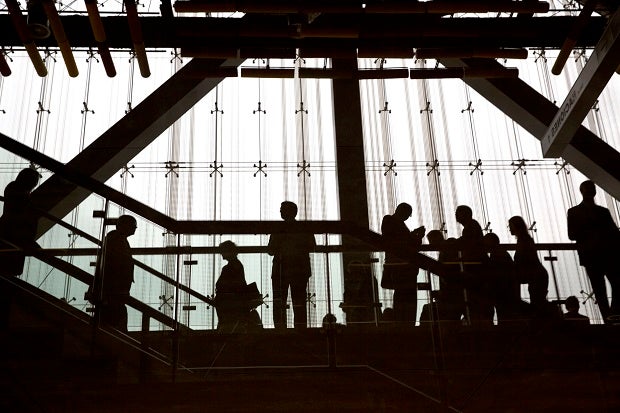 Attendees are silhouetted against windows of the Lima Convention Center, the venue for the World Bank and International Monetary Fund annual meetings, in Lima, Peru, Friday, Oct. 9, 2015. In a gleaming $160 million convention center built for the meetings, policymakers called Peru a prize pupil of their prescriptions for financial stability. AP

LIMA, Peru — The world’s top development banks pledged Friday to boost their funding to lessen climate change’s impact, aiming for the goal of $100 billion a year that rich countries have pledged to transfer to developing countries by 2020.

The pledges were made as finance ministers met in Lima less than two months ahead of a climate conference in Paris considered pivotal if the brakes are to be put on global warming.

“This is a positive outcome and I think we can say with some certainty that we will reach the $100 billion commitment” that was made at the 2009 climate talks in Copenhagen, French Foreign Minister Laurent Fabius told reporters.

“It is the beginning of what you need, because if the international community doesn’t roll up it sleeves and get to work this thing is just too big for us,” said Rachel Kyte, the World Bank vice president for climate change.

For the World Bank alone, that will mean boosting climate financing by a third, potentially making $29 billion a year in additional funding available by 2020.

A report issued this week by the 29-country Organization for Economic Cooperation and Development estimated $62 billion was spent last year, up from $52 billion the previous year, with multilateral development banks accounting for 40 percent of climate financing.

The charity Oxfam estimates only about 16 percent of that money — or $2 billion — is directly invested in helping poor countries hit hardest by global warming to cope with extreme weather it is already causing.

“The poorest countries are still being short-changed,” said Oxfam climate policy expert Isabel Kreisler. Most of the money is going to green energy investments for reducing the burning of fossil fuels that cause global warming.

The finance ministers of 20 countries most vulnerable to climate change’s impact held their inaugural meeting in Lima and called on developed countries to boost by 50 percent the financing for adaptation, which includes everything from building sea walls to more heat-resistent highways and relocating low-lying communities where sea levels are rising.

The countries include the Philippines, Bangladesh, Costa Rica and island nations and are home to nearly 700 million people.

“Climate finance is going to be a dealmaker or deal-breaker in Paris, so unless there is a credible roadmap on the table on how these imbalances are going to be addressed, we do see developing countries putting a Paris agreement potentially at risk,” Kreisler said.

“The $100 billion is a very important political commitment that developed countries made in Copenhagen but it’s really the tip of the iceberg,” said Jennifer Morgan of the World Resources Institute. “The real question is about the shifting of the trillions.”

The International Energy Agency has estimated an additional $1.1 trillion will be needed annually through mid-century to keep the global temperature rise below 2 degrees Celsius, the goal of international climate negotiations of which Paris will be the 21st round.

“The $100 billion is a political number,” Christiana Figueres, the executive secretary of the UN-run talks. “It was pulled out of a hat. But it must be respected.”

During the annual gathering of the World Bank and International Monetary Fund at which the finance ministers met, the heads of both lenders called for an end to subsidies on fossil fuels, which the IMF says amount to more than $5 trillion a year.

‘Not caring about climate change is inhuman’

IMF chief: We’re cooked if we fail on climate change