She’s getting due process under PH laws–Palace
By: Gil C. Cabacungan and Nikko Dizon - @inquirerdotnet
Philippine Daily Inquirer / 12:10 AM October 09, 2015 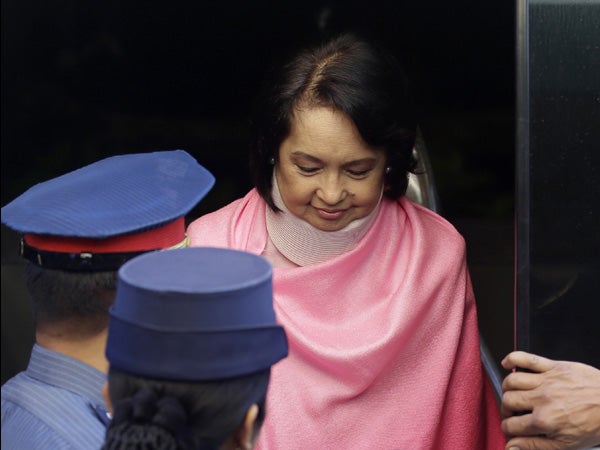 A UNITED Nations body has called for a “reconsideration” of the bail plea of former President and now Pampanga Rep. Gloria Macapagal-Arroyo, calling her detention “arbitrary” and a violation of international law.

But Sandiganbayan Presiding Justice Amparo Cabotaje-Tang Thursday defended the First Division’s decision to deny Arroyo’s plea for bail, insisting that the graft court did not violate any international law.

Malacañang also stood firm that the government has not violated the rights of Arroyo, who remains in hospital detention while on trial for plunder.

Clooney sent the news of the WGAD’s decision to endorse in full all arguments of Arroyo to her Filipino lawyer, Lorenzo  Gadon, in an e-mail on Wednesday.

“Mrs. Arroyo and her legal team welcome the UN’s expert opinion and urged the Philippine government to comply with it immediately,” Clooney said.

In the decision quoted by Clooney, the WGAD—which she described as a “prominent UN body composed of five independent human rights experts—urged the Sandiganbayan to reconsider Arroyo’s petition for bail and accord her with “an enforceable right to compensation for the deprivation of liberty, which already occurred.”

Clooney said the WGAD requested the Philippine government to ensure “fair trials” and proceed with the cases without undue delay.

In her e-mail, Clooney said the UN body found Arroyo’s detention arbitrary and illegal because “the Sandiganbayan failed to take into account her individual circumstances, failed to consider measures alternative to pretrial detention, and because of undue delays in proceedings against her.”

The WGAD also found her detention “politically motivated” because her confinement was due to “her exercise of her right to take part in government and the conduct of public affairs” and “because of her political… opinion,” Clooney said.

She reported that the UN body underscored the Aquino administration’s decision to stop Arroyo from traveling in November 2011 in defiance of a Supreme Court ruling allowing her to seek medical treatment for her neck and spine illnesses.

In an interview with reporters during the Sandiganbayan’s budget presentation at the House of Representatives Thursday, Tang said: “We have our own judicial process that has to be observed and the First Division of the court has precisely observed this process in place. I don’t think the court has violated any international law and the court has always observed all the processes that are in place in the country.”

She said the Sandiganbayan would not change its decision unless there was a “radical or significant material change in her case.”

In Malacañang, Communication Secretary Herminio Coloma Jr. said Arroyo had been “accorded such due process and has availed herself of various legal remedies under Philippine laws.”

Arroyo’s case is being heard by Philippine courts, independent bodies that have the “sole jurisdiction” to decide on the detention of accused like her, Coloma said.

“The Philippine government or any international body, for that matter, cannot interfere nor influence the course of an independent judicial proceeding,” he said.

Coloma said, however, that the government had taken note of the WGAD opinion.

The government, he added, “will prepare an appropriate response, according to the WGAD’s rules.”

Outgoing Justice Secretary Leila de Lima on Thursday said she had yet to read the WGAD opinion but she criticized the UN body’s findings.

“They should understand what’s in our Constitution and our rules of court,” De Lima said.

“It’s as if they were taking the issue of the denial of bail, but it’s in our Constitution, it’s in our laws. While international law forms part of the law of the land under the doctrine of incorporation, what’s in our laws should be obeyed,” she added.

Senate President Franklin Drilon said Arroyo was being tried according to Philippine laws.

“We have our laws here. She is being tried in accordance with our laws,” he said.

In an interview with reporters Thursday, Gadon admitted the UN body could only pursuade and not force the Philippine government to follow its recommendation.

He said, however, that he  hoped the government would heed the WGAD because state agencies were the respondents in the case.

He also noted that the case was obviously weak and that Arroyo was being singled out because all of her corespondents had been granted bail.

Arroyo appealed to the Supreme Court in April after the Sandiganbayan last year denied the petition for bail she filed in January 2013 and a supplemental motion she filed in October of the same year.

Arroyo is detained at Veterans Memorial Medical Center in Quezon City while being tried on charges of plunder involving alleged use of P366 million in intelligence funds of the Philippine Charity Sweepstakes Office “for personal gain” in the last three years of her administration, from 2008 to 2010. With reports from Jerome Aning and Leila B. Salaverria