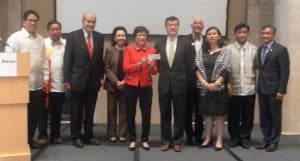 SAN FRANCISCO — Filipino American History month got off to a enlightening start with a whole day opening celebration at the Asian Arts Museum at Civic Center, San Francisco attended by Filipino Americans and non-Filipinos alike, both young and old.

This year’s theme, “Ugnayan Lahi,” weaves a cultural tapestry encompassing generations. A “Panawag” kicked off the event; it’s the summoning of the gods to ensure that the day’s festivities overflowed with life, color and abundance.

Bensurto elaborated on the theme Ugnayan Lahi, which is to link generations and promote connectivity within the Filipino American community and with other cultures.

“An empowered Fil-Am community is what we all aspire to be, and I am encouraged by the increasing number of activities commemorating this month as the years go by,” Bensurto declared.

“Just recently Ms. Patis Tesoro the grand Dame of Philippine fashion described the artistry needed to weave the piña cloth. In a way weaving the piña symbolizes how the Filipino American community continues to weave itself into the mainstream American society,” the consul added. 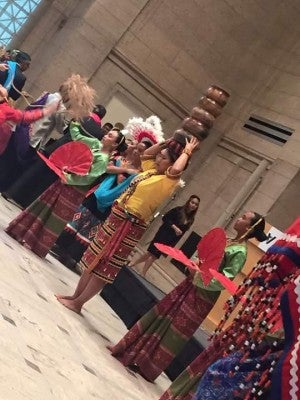 A “Panawag” summons the gods for an auspicious celebration. PHOTO BY NASTASSJA REINTEGRADO/NAFFAA

Bensurto also hoped that the visitors would get to know more about the Philippines, the Filipino people, Filipino American community and Filipinos’ unique contribution to American history.

Major General Antonio Taguba (ret.), who spent 34 years in the U.S. Army and whose parents played active roles in World War II, focused on the continuing struggles of Filipino war veterans since the Rescission Act of 1946 that denied them benefits. 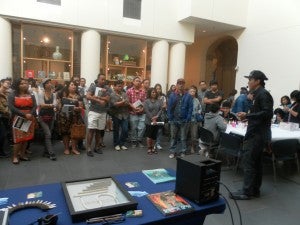 Taguba urged everyone to help push for the approval of the 2015 Philippine Veterans II Congressional Gold Medal Act that will formally give the Filipino WWII veterans the recognition and honor due them.

The Congressional Gold Medal is the highest award that the United States and Congress give to groups and individuals for their outstanding contribution in the country.

“At the moment, 67 U.S senators and 218 congressmen are co-sponsors of the bill. We need to pass this bill by September 2016 or risk having to start all over again,” Taguba reported. 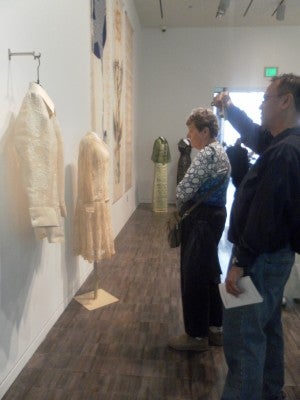 Among the Filipino leaders who were in the audience was tenured Filipino American Professor Asian American studies James Sobredo of California State University in Sacramento.

Sobredo has been teaching Filipino American history, Philippine history as well as Filipino global migration for 17 years. He brought along his students from Sacramento to be part of the San Francisco Fil-Am History celebration.

“October is very important because on October 1587, the first Filipinos arrived here and they were referred to in the Manila Galleon documents as Ochos Luzones Indios. They were first thought to be native Americans, but the research of Filipino American National Historical Society, particularly Prof. Eloisa Gomez-Borra at UCLA, proved that these were in fact Indios from Luzon who are Filipinos. They came as part of the Manila Galleon Trade, which was the largest economic system in the entire world at the time, making Manila a center of trade,” Sobredo lectured.

He added that Filipinos were the ones who built and sailed the galleons, an important role they still perform as today practically every merchant marine fleet in the world also has Filipino sailors. 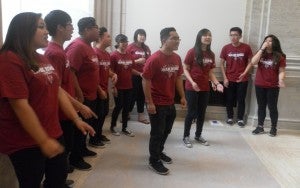 “The significance of having a history month is to let the general public know that Filipinos have played a very important role for over 400 years in the United States. We are the largest Asian group in California and we have the second highest income among all families in California. I hope Filipinos realize that we have reached critical mass,” stressed Sobredo.

“The most important message I have is that I hope Filipinos support our activities by coming to these events and more importantly by taking our Filipino American classes which are offered in Sacramento, San Francisco State, Berkeley, East Bay and also Davis state universities,” Sobredo said.

The students Sobredo brought with him were fascinated and grateful for the chance to be part of the festivities.

“I witnessed a very interesting presentation. We watched the opening ceremony summoning of the gods. I have never experienced anything like this and it was very different for me at the same time informative because I learned about the Filipino culture. I think altogether culture is very important for the people,” said Samantha Marti, a non-Filipino student.

“I don’t really identify with my culture because I don’t really know anything much about it. So learning other cultures is interesting. I learned in Filipino culture that they incorporate a lot of the arts like in a regular mural and food. Coming here to see and learning more about Filipino culture had just enlightened me altogether,” Marti explained. 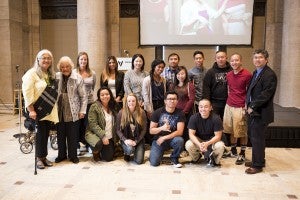 Angela Sarte, whose family hails from Ilocos and Manila, was glad to learn more about her culture, being a second-generation Filipino American.

“Growing up, my family is very traditional but at the same time there could be a cultural disconnect trying to keep my Filipino values as well as adapting to American culture. So I was amazed to see a lot of us come together and be able to celebrate our culture. I am very fascinated to learn that we have a large Filipino community here willing to come out to celebrate because I feel like in Sacramento we should have something more like that too,” Sarte disclosed.