Why raps filed vs anti-Marcos freedom fighters in US 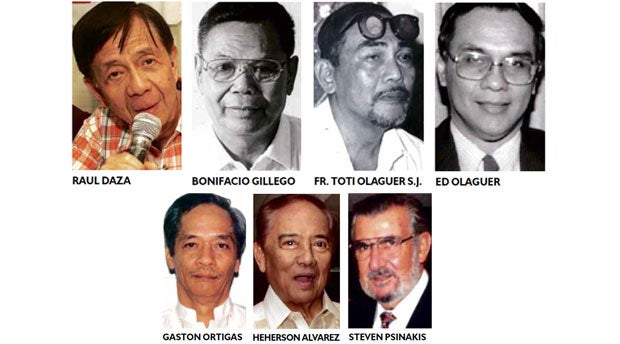 For the Filipinos in the United States who led the resistance against the martial law regime, the long arm of American justice continued to bedevil them long after the 1986 Edsa People Power Revolution.

The pain of long exile for this group—composed of some Filipinos and Filipino-Americans, mostly unnamed but led mainly by Raul Daza, Bonifacio Gillego and Heherson T. Alvarez, along with naturalized American citizen Steven E. Psinakis (husband of Precy Lopez of the Lopez clan)—still weighed heavily in their hearts.

Some mornings, a few would wake up in sweat, roused by nightmares of being chased by Marcos assassins.

Among the Filipinos who directly supported or participated in the resistance were the Jesuits Toti Olaguer (brother of Ed) and Romeo Intengan (also a doctor of medicine), Alfonso Yuchengco, Norberto Gonzales and Danny Lamilla.

Two years into the Cory Aquino administration, US prosecutors in a San Francisco federal district court pursued charges that linked three Philippine officials to bomb-making conspiracy and interstate transportation of explosives in the early 1980s. The three were Alvarez, Daza and Gillego.

In 1980, there was a rash of bombings in Metro Manila and the Light-A-Fire Movement was primarily suspected.

On Sept. 12, 1980, bombs went off in Metro Manila, one badly damaging Rustan’s shopping mall in Makati. The explosion at Rustan’s injured 70 people and killed an American tourist.

Other bombings occurred. One involved Doris Nuval Baffrey, who on Oct. 19, 1980, detonated an explosive at the Philippine International Convention Center while President Ferdinand Marcos was addressing a conference of the American Society of Travel Agents.

Another involved Victor Burns Lovely Jr., a Philippine-born American citizen from Los Angeles, California, and a member of the Movement for a Free Philippines.

On Sept. 6, 1980, Lovely was almost killed and his younger brother, Romeo, was seriously injured, after a bomb exploded in his Manila YMCA room.

Later, the core group of the Light-A-Fire Movement was arrested while meeting in Quezon City. Among them were businessman Eduardo Olaguer, Asia Institute of Management professor Gaston Ortigas and the 60-year-old Ester Jimenez, mother of Jim and Ducky Paredes. They were all convicted and sentenced to die by electric chair in 1984.

Even before the Marcos regime collapsed, US federal prosecutors had handwritten notes and a draft indictment that would have allowed the United States attorney to bring criminal charges against Alvarez, Daza, Psinakis, Gillego and Avila for activities to oust Marcos.

The possible charges included violation of the Neutrality Act, which prohibits launching private armies from the United States against countries with which the country is at peace.

Interestingly, the handwritten notes indicated that Psinakis, Daza and Gillego were also giving weapons training in the Arizona desert to anti-Marcos exiles.

From the fall of 1979 through December 1981, the documents claimed, various members of an anti-Marcos group, the Movement for a Free Philippines, practiced detonating explosive devices in Arizona and transported explosives in at least four states.

They further alleged that the training was part of a plan to bomb targets in Manila in an effort to destabilize the Marcos regime.

Justice department officials, however, astutely informed United States Attorney Joseph P. Russoniello that the state department was concerned that the fledgling Aquino government would be embarrassed if the charges were pressed against the administration officials.

When the indictment was finally filed in December 1986, it named only two naturalized American citizens, Psinakis and Avila. Avila, who went into politics in the Philippines, was never arrested or arraigned.

Only Psinakis was arrested. A native of Greece, Psinakis was seized in his San Francisco home in July 1987, and he pleaded not guilty. If convicted, he faced a maximum sentence of 15 years in prison and $20,000 in fines.

Psinakis had collaborated closely with Alvarez and his wife, Cecile Guidote-Alvarez. Alvarez, who was an exile for 13 years, was a close confidante of Sen. Benigno Aquino Jr.

After the opposition leader was assassinated in 1983, Alvarez organized and headed the Ninoy Aquino Movement.

Psinakis’ trial brought focus to the allegations against the three members of Congress. In Manila, Congressman Daza laughed off the charges, saying US prosecutors had no evidence to sustain the indictment.

Senator Alvarez voluntarily flew to the United States to attend the October 1988 hearing, testifying he had no knowledge or training with explosives.

“That’s not true at all,” Alvarez said of the bomb-making allegations. “I’m scared of bombs.”

Alvarez’s testimony, part of a defense strategy to show Psinakis was unconstitutionally singled out for prosecution while others were ignored, helped led to Psinakis’ acquittal.

In June 1989, the Philippine government, deeply interested in the fate of Psinakis, sent Foreign Secretary Raul Manglapus to the United States.

Manglapus, who also spent the Marcos years in US exile, told a jury that Psinakis was a “hero” in the revolution that overthrew Marcos.

Alvarez is philosophical about the contradictory roles that freedom fighters must often assume. “Fortunately,” he muses, “we were never indicted.

According to The New York Times, “the US prosecution filed charges after the revolution had won. The accused had assumed the leadership with the installed democratic government.”

Every year, the Ninoy Aquino Movement, organized by Alvarez while in exile and was called by The Wall Street Journal and the Christian Science Monitor as the “biggest and best organized opposition movement in the United States,” honors heroes—Filipinos and foreigners whose extraordinary courage and commitment to the restoration of Philippine democracy brought down the Marcos dictatorship—that long and agonizing era of human rights violations, numerous desaparecidos, political repression and massive corruption.